U of T chemistry team advances to ‘close the carbon cycle’ 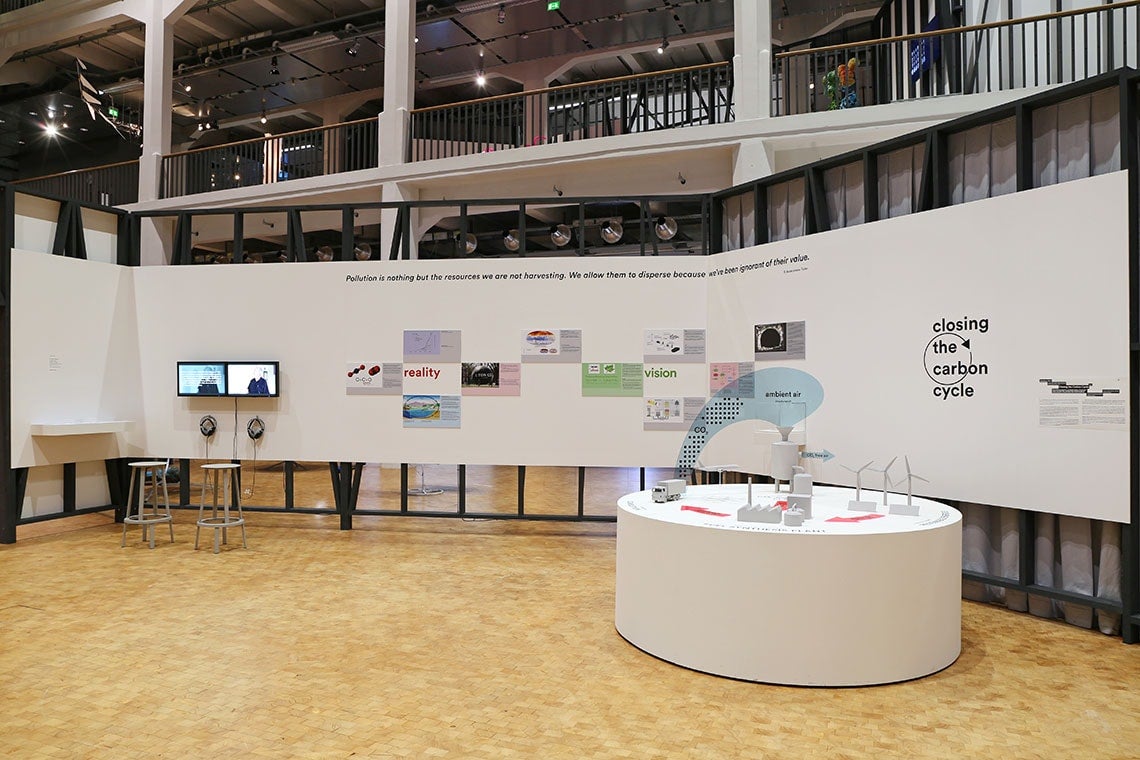 Closing the carbon cycle by U of T's Geoffrey Ozin: The diorama will open in December at Austria’s Museum of Applied Arts in Vienna (photo by Peter Weibel)

Making fuel out of polluted air, using it to power industry, and then taking the emissions from that industry back out of the air to create more fuel – it sounds too good to be true. But while there are a few hurdles to clear, a team led by University of Toronto’s Geoffrey Ozin of the department of chemistry in the Faculty of Arts & Science is getting closer to closing the carbon cycle.

“Carbon dioxide's so frustrating because it's the most stable molecule on the planet,” says University Professor Ozin of the climate pollutant that outlives soot, methane and hydrofluorocarbons by a long shot.

“That's the problem. Anything you burn becomes CO2 and CO2 is really good at staying CO2,” says Ozin, who holds the Canada Research Chair of materials chemistry and nanochemistry.

For the last five years, Ozin has led a multidisciplinary team known as the U of T Solar Fuels Cluster on a quest to develop a process to convert atmospheric CO2 into a renewable fuel. Ozin says his plan for manufacturing the fuel would take as much carbon dioxide out of the atmosphere as burning the fuel would put back in. This photomontage unites the vision of a global CO2​ utilization strategy with a fuel synthesis plant that enables closing the carbon cycle (image courtesy of Todd Siler and Geoffrey Ozin, Matthias Gommel and Peter Weibel, “GLOBALE: Exo-Evolution” exhibition at the Center for Art and Media in Karlsruhe)

The team’s efforts have attracted the attention of major international corporations, and even inspired an exhibit about the process that’s been on display in Germany – a world leader in CO2 reclamation – and more recently in Austria.

The quest to make fuel out of waste carbon isn't new, but Ozin and his team are the only ones using both the heat and light of the sun to convert CO2, hoping their process will be more efficient than anyone else’s.

Recently, Ozin’s work caught the eye of the director of the Center for Art and Media in Karlsruhe, Germany, which specializes in multimedia exhibits at the confluence of art and science. The result was a vivid diorama depicting Ozin’s vision that has met with acclaim in Karlsruhe and will open in December at Austria’s Museum of Applied Arts in Vienna.

It is not the first time Ozin’s research has been immortalized in art. In 2011, American artist Todd Siler began creating multimetre-tall abstract sculptures of Ozin’s nano-structures, showing them in such places as the Armory Show, New York City’s premier art fair.

“There were human-sized nano rods, sheets, self-assembly, applications in energy, climate change,” says Ozin. “I lost my voice by the end of the week explaining it to all the visitors. We got two main comments: 'I like the colours' and 'What the hell does it all mean?'”

Ozin is currently working with a dozen U of T fourth-year chemical engineering students to design and build a pilot-scale version of his laboratory demonstration 'solar refinery’ connected to U of T's physical plant.

"There are different ways of doing this and maybe different methods will be more useful in some parts of the world than others,” says Ozin. “Some places have more wind, some places are sunnier, some have more water,” he says. “Everybody's pushing their method to valorize CO2 capture and conversion and when the public sees someone holding a gallon of gasoline that's been pulled out of thin air, that's going to shake them up.

“If you want to do this on a gigaton-scale, the way that we're doing it is the way to go.”