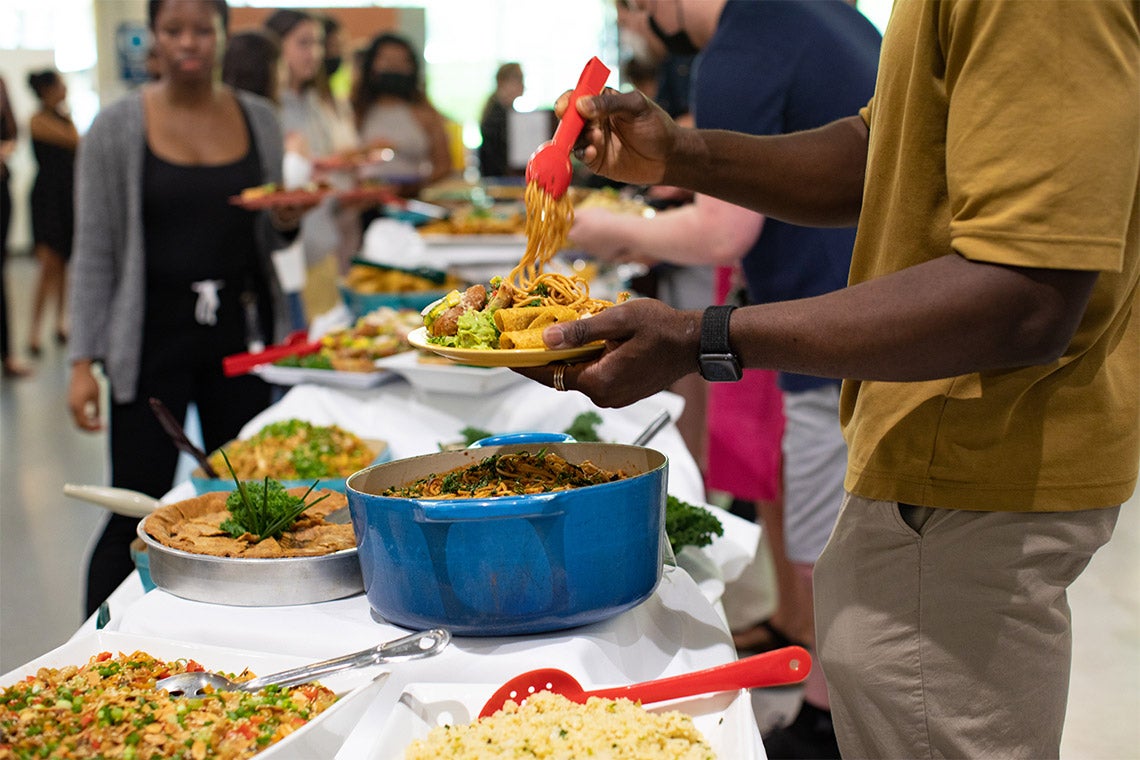 “Wow!” was the first word out of Chef Jaco Lokker’s mouth after biting into a vegan burger made of black beans and tempeh that was seasoned with herbs and spices.

The University of Toronto’s director of culinary operations and executive chef recently joined other U of T chefs in a kitchen at New College for a workshop on how to cook delicious, nutritious and sustainable plant-based foods.

Lokker says U of T students are increasingly conscious of food and agriculture’s impact on the environment – and are asking for more plant-based options. 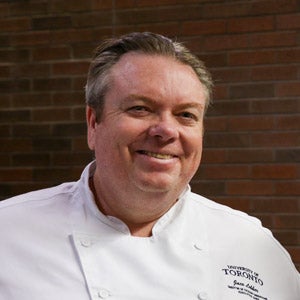 “It's definitely demand-driven and the demand [for plant-based foods] is up everywhere – in institutional settings, restaurants and grocery stores,” he says.

U of T Food Services has pledged to convert another 20 per cent of its menus to plant-based options as part of the university’s broader sustainability goals, Lokker adds.

The recent workshop by Forward Food for Professionals, a foodservice organization supported by the Humane Society International, was part of that effort. There, U of T chefs learned to make Bolognese with tempeh instead of meat, and meringues with aquafaba (the liquid left over from chickpea cans) instead of egg whites.

U of T News caught up with Lokker for a sneak peek at the delicious, healthy and sustainable foods that will appear on U of T menus this fall.

What kinds of things are you learning in the workshop?

How to make a meringue with aquafaba (the liquid that comes off the chickpea), or how to take tempeh and make it taste like bacon. With different spices and ingredients, you can take it and roast it and it kind of has a bacon flavour to it. It’s just a different way of making a veggie burger.

Then there’s a vegan French toast. Usually you need eggs, right? Well, you can use flax seed – you soak and puree it – and it gives the same effect as the eggs.

Why are you taking this course?

We actually took a pledge. The university has pledged to move toward more plant-based food – an additional 20 per cent of our menu. That’s why we asked Forward Food to come in.

Our overall goal is to continue to grow our plant-based offerings for our students and community – for many reasons. It’s a healthier diet and it’s more sustainable for the environment. I’m not saying that animal protein is bad, but plant-based is better all-around and is a more sustainable product.

Can you share more details about recipes you're adapting to use only plant-based ingredients?

A perfect example is, instead of doing a chicken pot pie, we’re doing a chickpea pie with coconut milk. We’re also making a pasta Bolognese, but instead of using a beef product, we use tempeh for the sauce. 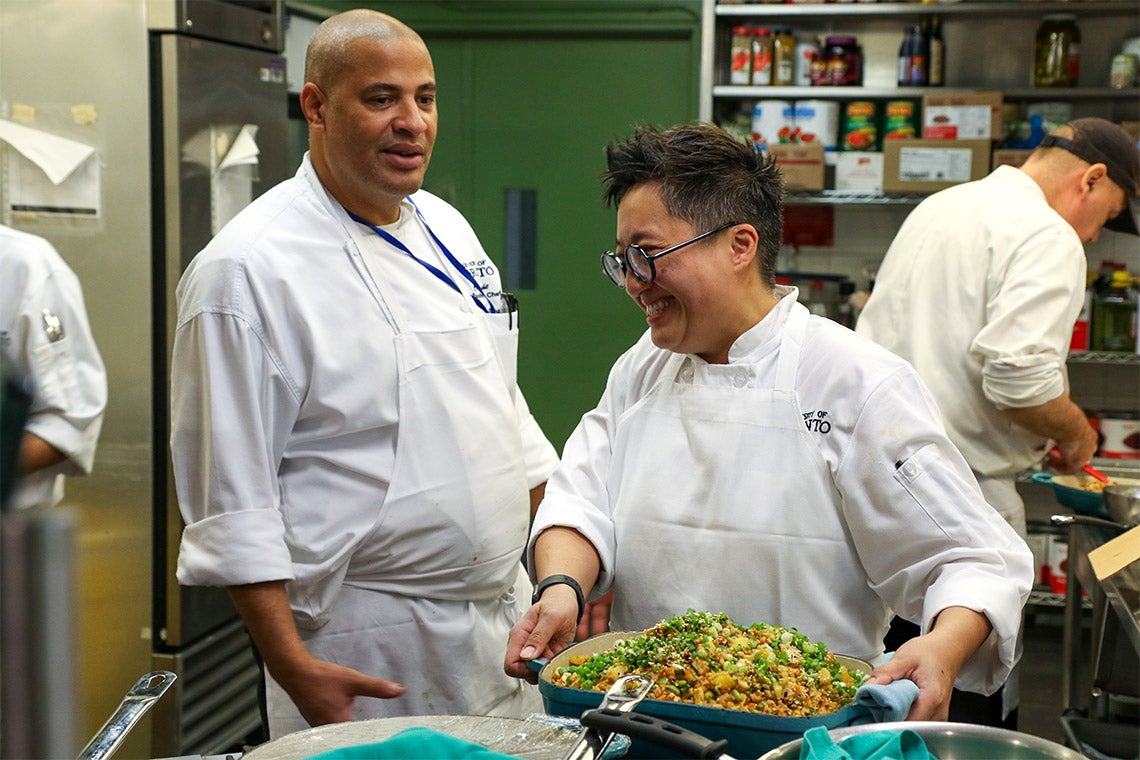 U of T chefs participate in a two-day workshop focused on cooking delicious, nutritious and sustainable plant-based foods (photo by David Lee)

Are these plant-based dishes as tasty as the traditional recipes?

I just had a burger [made of black bean, tempeh, herbs and spices] and went “Wow.” I’ve had a lot of plant-based burgers in my life, but this was phenomenal. I just had a few dishes that were full of flavour. It really comes down to – and this is what it’s all about – saying, “Hey, you can take this to the next level by doing this.”

A lot of the flavour is actually spice-driven. As chefs, I think we’re often guilty of overthinking things a little bit. For the most part you don’t miss the meat. 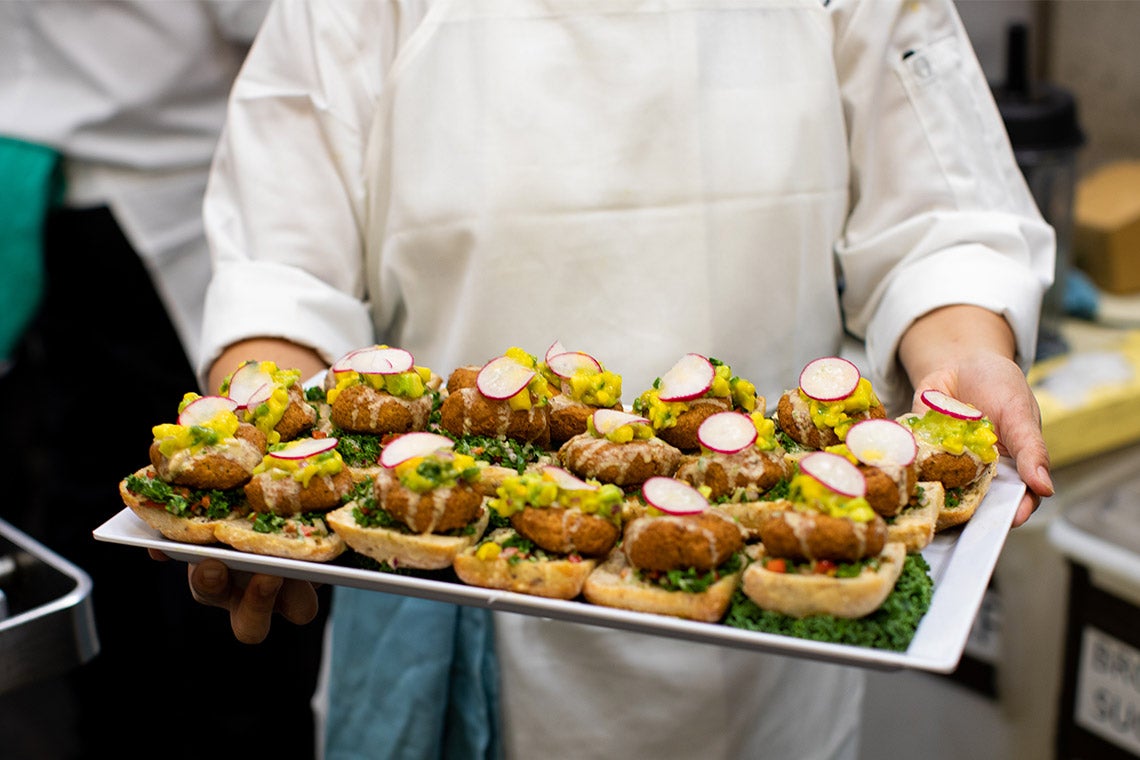 What do you mean by “overthinking”?

As chefs, we look at a situation and think: How are we going to substitute? What are we going to do to make this chicken à la king not chicken à la king? I wouldn’t have thought of using chickpeas. I would’ve thought, “Oh, we’ll use tofu or seitan [a vegan meat substitute made from hydrated gluten].” But chickpeas are a good protein source. That’s what I'm trying to say. As chefs, we let it run away from us and this [workshop] just kind of grounds us and brings us back to Earth and shows us the options available.

Do you find you're moving towards more of a plant-based diet in your personal life, too?

I definitely cook more plant-based meals at home. We don’t consume a lot of animal protein like we used to. On Instagram, I label myself as a part-time vegetarian. We used to cook steak and have one each, but we now split one three ways. And I cook steak much less frequently than I used to. You just move away from those options.

To be quite honest, there are so many more different products on the market today compared to five, six, seven years ago. In the produce section of the supermarket, plant-based products used to be limited to five or six items in the fridge. Now, it’s an entire fridge. There’s definitely growth in that segment. 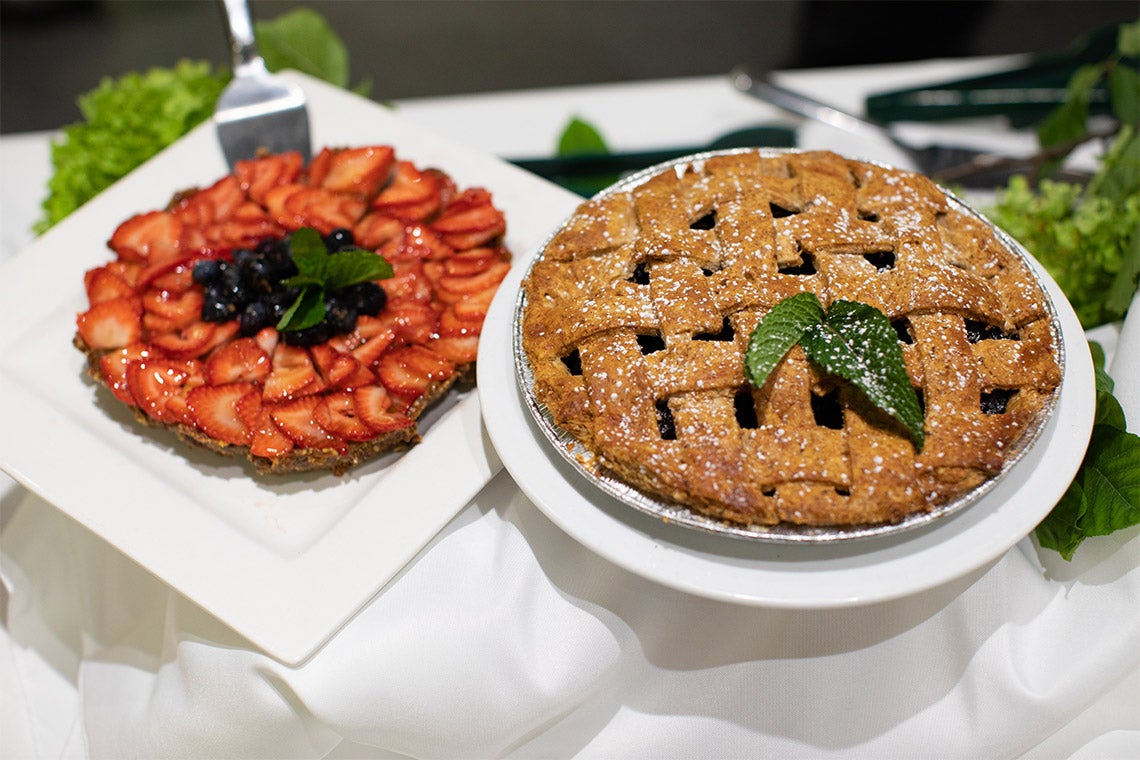 How do you think menus at U of T will change next semester?

There are dishes already from what we're learning today that are being added next year. The pot pie is one example.

Then there’s our Flex Burger. It’s 70 per cent Ontario beef and 30 per cent portobello mushroom stem. That mushroom stem could’ve been composted or thrown out, but instead it’s being consumed.

This isn’t just about offering more plant-based food; we’re also rethinking how we’re building our recipes. When I used to make a beef stew, it was 70 per cent beef and 30 per cent vegetables. Now, we’ve moved all our stews to a 50-50 ratio.

Do you have any tips for people who want to cook more plant-based meals at home?

I remember, many years ago, I was able to find only three cookbooks at Indigo that were plant-based or vegan-based. Today, you can walk into an Indigo and the main roundtable is all plant-based recipe books. There’s no shortage of information on plant-based cuisine.

I think the best place to start is just thinking about what you like to eat. If I like curry chicken, I can make that now with tofu. If I made it before, I’ll substitute the chicken with tofu or with chickpeas.

It’s not about having to cook differently; it’s about rethinking the ingredients.

If you’re on a student budget, is it better for your wallet to cook more vegan dishes, too?

Yes and no. Processed plant-based products can become expensive. In general, there used to be a scale where, if you looked at animal protein, it was double or three times the price of produce. That’s not necessarily the case anymore.

There are still some savings though – no doubt. Carrots, onions and potatoes are much more economical than a steak. So, in theory, yes it's more economical – and legumes and pulses are a good source of protein and there’s so much you can do with them, from making salads to stews and soups. You can even grind some of them out and use them in doughs. 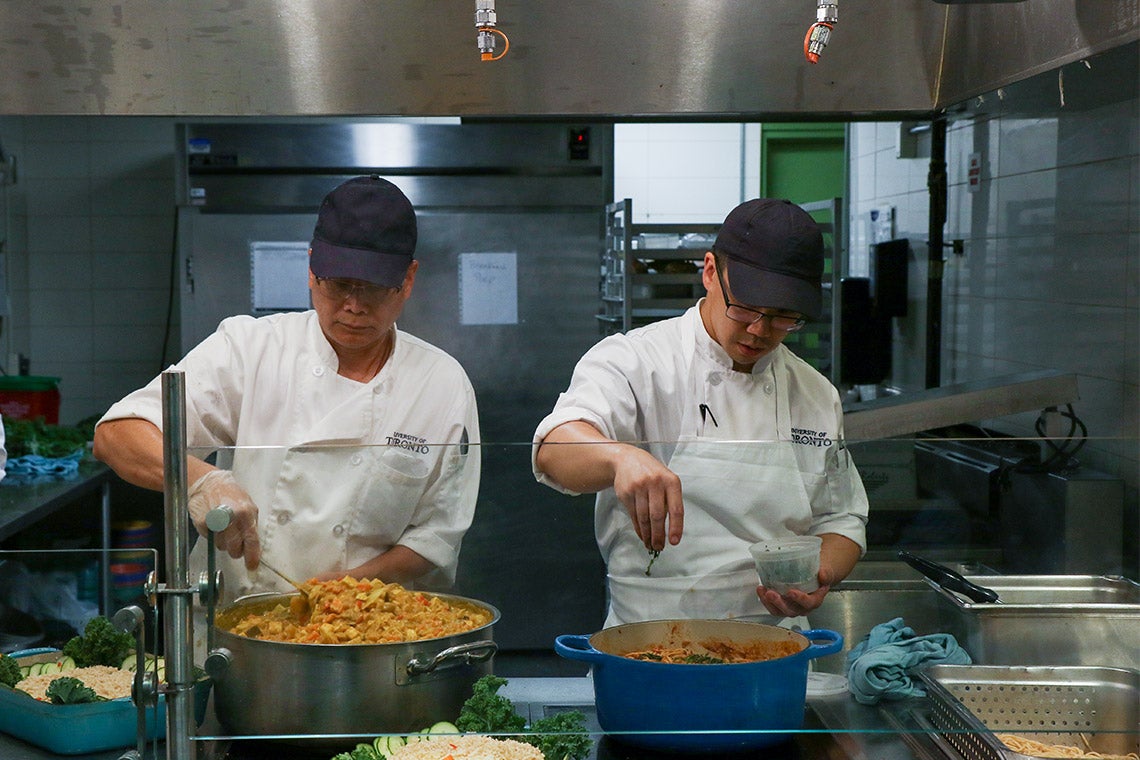 You said in a recent CBC interview that this move toward plant-based food is in response to student demand.

Yes. Our students are coming to campus today very much aware of climate issues and the impact of animals and diets on our planet. So, we have to be able to accommodate them.

I also think we need to be good stewards of our planet, make sure we’re socially responsible and make sure we do everything we can to protect the environment – local procurement, reducing animal protein on our menus, offering more plant-based options, different sources of packaging or reusable packaging.

It’s definitely demand-driven and the demand is up everywhere – in institutional settings, restaurants and grocery stores. And it will continue to grow over the years. It’s not a fad.

This is the future of how we need to live.