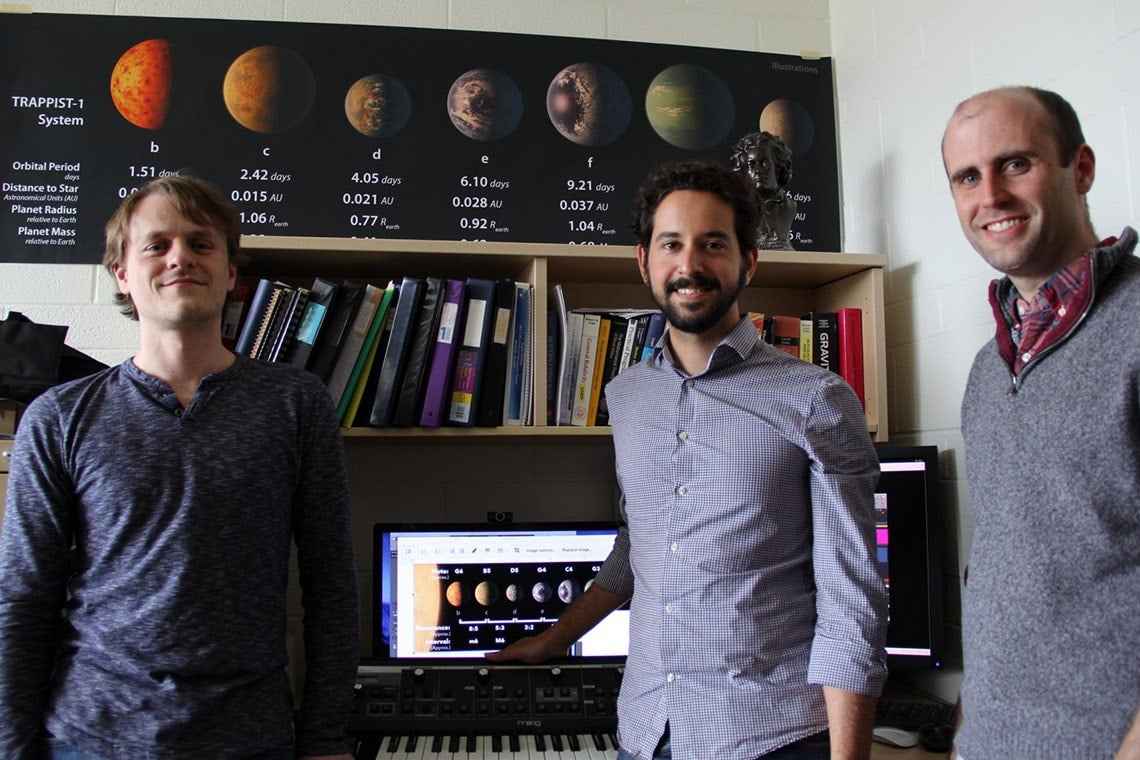 After centuries of looking with awe and wonder at the beauty of Saturn and its rings, we can now listen to them, thanks to the efforts of astrophysicists at the University of Toronto – the same team that used jazz and animation to solve the puzzle of the TRAPPIST-1 harmony earlier this year.

“To celebrate the Grand Finale of NASA’s Cassini mission next month, we converted Saturn’s moons and rings into two pieces of music,” says astrophysicist Matt Russo, a postdoctoral researcher at the Canadian Institute for Theoretical Astrophysics (CITA) in the Faculty of Arts & Science at U of T.

The conversion to music is made possible by orbital resonances, which occur when two objects execute different numbers of complete orbits in the same time, so that they keep returning to their initial configuration. The rhythmic gravitational tugs between them keep them locked in a tight repeating pattern that can also be converted directly into musical harmony.

“Wherever there is resonance there is music, and no other place in the solar system is more packed with resonances than Saturn,” Russo says.

The Cassini spacecraft has been collecting data while orbiting Saturn since its arrival in 2004 and is now in the throes of a final death spiral. It will plunge into the planet itself on Sept. 15 to avoid contaminating any of its moons.

Russo was joined by astrophysicist Dan Tamayo, a postdoctoral researcher at CITA and the Centre for Planetary Sciences at U of T Scarborough, and together they were able to play music with an instrument measuring over a million kilometres long. The musical notes and rhythms both come from the orbital motion of Saturn’s moons along with the orbits of the trillions of small particles that make up the ring system.

“Saturn’s magnificent rings act like a sounding board that launches waves at locations that harmonize with the planet’s many moons, and some pairs of moons are themselves locked in resonances,” Tamayo says.

For the first piece that follows Cassini’s final plunge, the researchers increased the natural orbital frequencies of Saturn’s six large inner moons by 27 octaves to arrive at musical notes. “What you hear are the actual frequencies of the moons, shifted into the human hearing range,” Russo says. The team then used a state of the art numerical simulation of the moon system developed by Tamayo to play the resulting notes every time a moon completes an orbit. The orbital periods, scaled frequencies, and musical notes of Saturn’s major moons. The frequencies have been increased by 27 octaves from their true values so they can be heard by human ears (photo courtesy of SYSTEM Sounds/NASA/JPL-Caltech/Elisabetta Bonora/Marco Faccin)

The moon system has two orbital resonances that give rhythmic and harmonic structure to the otherwise unsteady lullaby-style melody. The first and third moons Mimas and Tethys are locked in a 2:1 resonance so that Mimas orbits twice for every orbit of Tethys. The same relationship links the orbits of the second and fourth moons Enceledus and Dione, and the combination of the two simple rhythms creates interesting musical patterns as they fall in and out of synchronicity.

“Since doubling the frequency of a note produces the same note an octave higher, the four inner moons produce only two different notes close to a perfect fifth apart,” says Russo, who is also a graduate of U of T’s jazz performance program. “The fifth moon Rhea completes a major chord that is disturbed by the ominous entrance of Saturn’s largest moon, Titan.” The local orbital periods, scaled frequencies, and musical notes of Saturn's main ring system. The brightness profile of the un-illuminated side of the rings was used to modulate the volume of the constantly changing note. (Courtesy of SYSTEM Sounds/NASA/JPL/Space Science Institute)

As with the TRAPPIST-1 project, Russo and Tamayo are joined by Toronto musician, and Matt’s long-time bandmate, Andrew Santaguida. “Dan understands orbital resonances as deeply as anyone and Andrew is a music production wizard. My job is to connect these two worlds.”

Titan actually gives the Cassini probe the final push, which sends it hurtling towards its death in the heart of Saturn. The music follows Cassini’s final flight over the ring system by converting the constantly increasing orbital frequencies of the rings into a dramatic rising pitch; the volume of the tone increases and decreases along with the observed bright and dark bands of the rings. The death of Cassini as it crashes into Saturn is heard as a final crash of a final piano chord, which was inspired by The Beatles’ "A Day in the Life,” in which a rich major chord follows a similarly tense crescendo.

In addition to the soundtrack, Russo has had a large wood carving made of Saturn’s rings so people can follow along with their fingertips while listening. The carving will be part of a tactile-audio astronomy exhibit at the Canadian National Institute for the Blind's Night Steps fundraising event for the visually impaired in Toronto on Sept. 15, the same day the Cassini mission is scheduled to end.

A wood carving of Saturn’s main ring system designed for the visually impaired. They will be able to feel many complex structures within the rings while also listening to their audio form. (photo courtesy of SYSTEM Sounds)

The second piece demonstrates the scales played by Janus and Epimetheus, two small irregular moons that share an orbit just outside Saturn’s main ring system. Together they are an example of 1:1 resonance, the only one in the solar system. The pair orbit at slightly different distances from Saturn but with a difference that is so negligible they swap places every four years. The composition simulates the final few months of Cassini’s mission, while Janus is inching closer to Epimetheus before stealing its place in 2018. Together, the two moons play a unison drone but with a constantly shifting rhythm that repeats every eight years.

Russo played a C-sharp note on his guitar once for every orbit while a cello sustains a note for each resonance within the rings.

“Each ring is like a circular string, being continuously bowed by Janus and Epimetheus as they chase each other around their shared orbit,” Russo says. Cassini recently captured an image of one of the ripples this creates within the rings. To turn this into music, Russo and Santaguida used the brightness variations in this image to control the intensity of the cello.

Russo, Tamayo and Santaguida converted the recently discovered TRAPPIST-1 planetary system into music a few months ago. They’ve dubbed their astro-sonic side-project SYSTEM Sounds and hope to continue exploring the universe for other evidence of naturally occurring harmonic resonance.