Planets in TRAPPIST-1 orbiting in synchronized harmonies, U of T astrophysicist and musicians discover 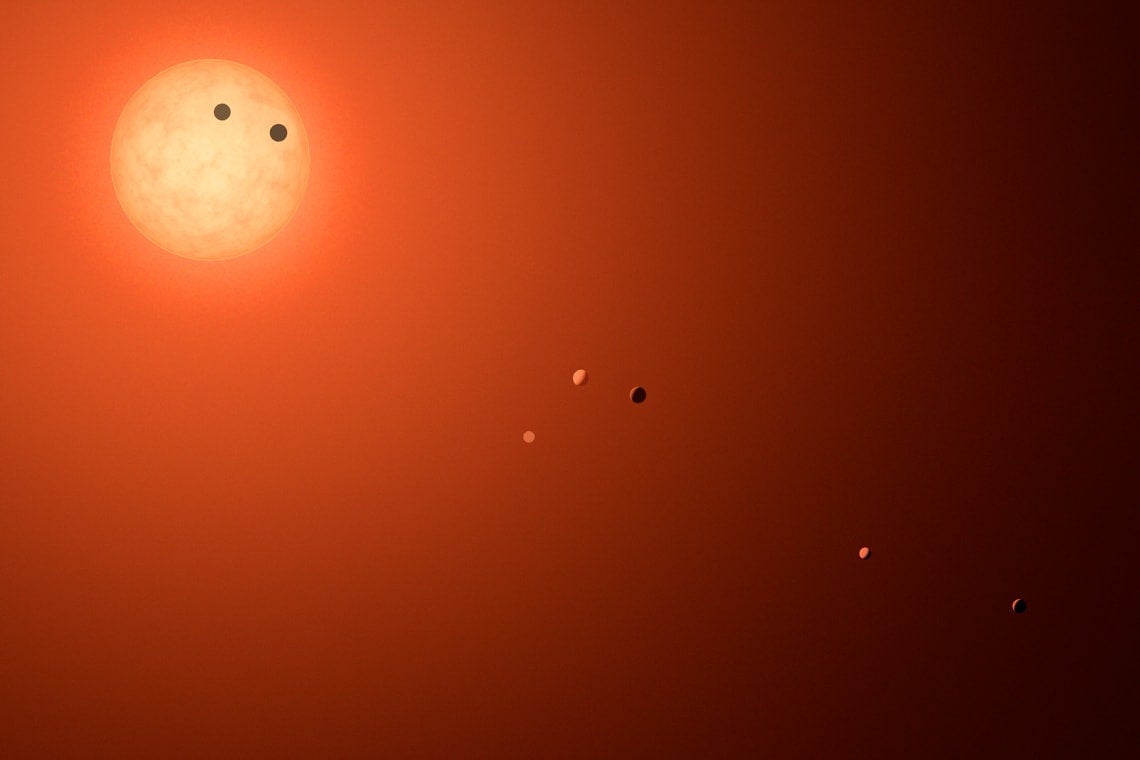 NASA's discovery of the TRAPPIST-1 planetary system earlier this year created excitement after three planets were found to be in the star's habitable zone. But it also created confusion since the system appeared to be highly unstable, in danger of smashing itself to bits.

Now a U of T astrophysicist may have helped solve that puzzle – with jazz music and animation.

Dan Tamayo, a postdoc researcher at U of T Scarborough’s Centre for Planetary Science, fellow astrophysicist Matt Russo, who plays jazz, and musician Andrew Santaguida teamed up with a Toronto-based animation studio to illustrate the planetary system's remarkable configuration. Speeding up the planets’ orbital frequencies into the human hearing range, they've created an astrophysical symphony of sorts, playing out more than 40 light years away.

In research published in the journal Astrophysical Journal Letters, the scientists describe the planets in the TRAPPIST-1 system as being in something called a “resonant chain” that strongly stabilizes it.

The scientists who originally discovered the planetary system found it to be unstable, with simulations in their discovery paper showing the planets “crashing into one another in less than a million years.”

“This may seem like a long time, but it’s really just an astronomical blink of an eye,” says Tamayo.  “It would be very lucky for us to discover TRAPPIST-1 right before it fell apart so there must be a reason why it remains stable.”

In resonant configurations, planets’ orbital periods form ratios of whole numbers. For example, Neptune orbits the sun three times in the amount of time it takes Pluto to orbit twice. This is good for Pluto because otherwise it wouldn’t exist. With the two planets’ orbits intersecting, if things were random they would eventually collide. But because of resonance, the locations of the planets relative to one another keeps repeating.

TRAPPIST-1 takes this principle to a whole other level with all seven planets being in a chain of resonances.

Tamayo, Russo and Santaguida created the animation, showing that the planets play a piano note every time they pass in front of their host star, and a drum beat every time a planet overtakes its nearest neighbour. 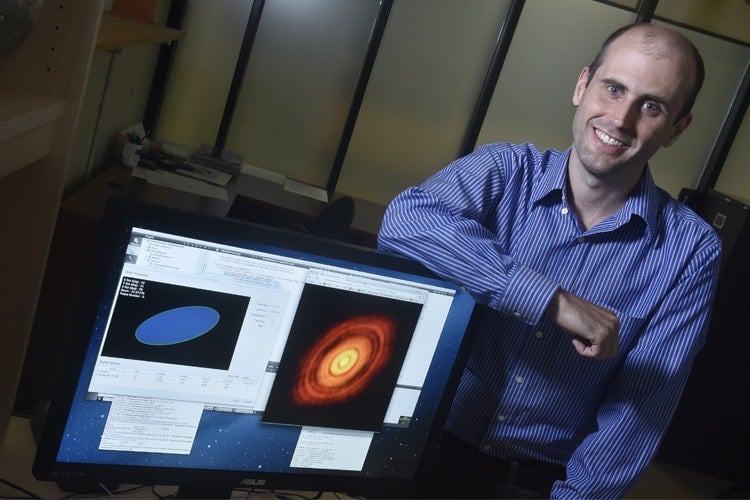 Dan Tamayo, a postdoc researcher at U of T Scarborough, and a fellow astrophysicist have helped simulate what keeps the TRAPPIST-1 system stable (photo by Ken Jones)

“There’s a rhythmic repeating pattern that ensures the system remains stable over a long period of time,” says Russo, who thought the TRAPPIST-1 resonances looked familiar from music theory.

Because the planets’ periods are simple ratios of each other, their motion creates a steady repeating pattern that is similar to how we play music. Simple frequency ratios are also what makes two notes sound pleasing when played together.

“Most planetary systems are like bands of amateur musicians playing their parts at different speeds,” says Russo. “TRAPPIST-1 is different. It’s a super-group with all seven members synchronizing their parts in nearly perfect time.”

But as Tamayo notes, even synchronized orbits don’t necessarily survive very long. For technical reasons, chaos theory also requires precise orbital alignments to ensure solar systems remain stable. This can explain why the simulations done in the original discovery paper quickly resulted in the planets colliding with one another.

“It's not that the system is doomed, it’s that stable configurations are very exact,” he says. “We can't measure all the orbital parameters well enough at the moment so the simulated systems kept resulting in collisions because the setups weren’t precise.”

In order to overcome this, Tamayo and his team looked at the system not as it is today, but how it may have originally formed. When the system was being born out of a disk of gas, the planets should have migrated relative to one another, allowing the system to naturally settle into a stable resonant configuration.

“This means that early on, each planet's orbit was tuned to make it harmonious with its neighbours, in the same way that instruments are tuned by a band before it begins to play,” says Russo. “That’s why the animation produces such beautiful music.”

The team tested the simulations using the supercomputing cluster at the Canadian Institute for Theoretical Astrophysics (CITA) and found that the majority they generated remained stable for as long as they could possibly run it. This was about 100 times longer than it took for the simulations in the original research paper describing TRAPPIST-1 to go berserk.

“It seems somehow poetic that this special configuration that can generate such remarkable music can also be responsible for the system surviving to the present day,” says Tamayo.