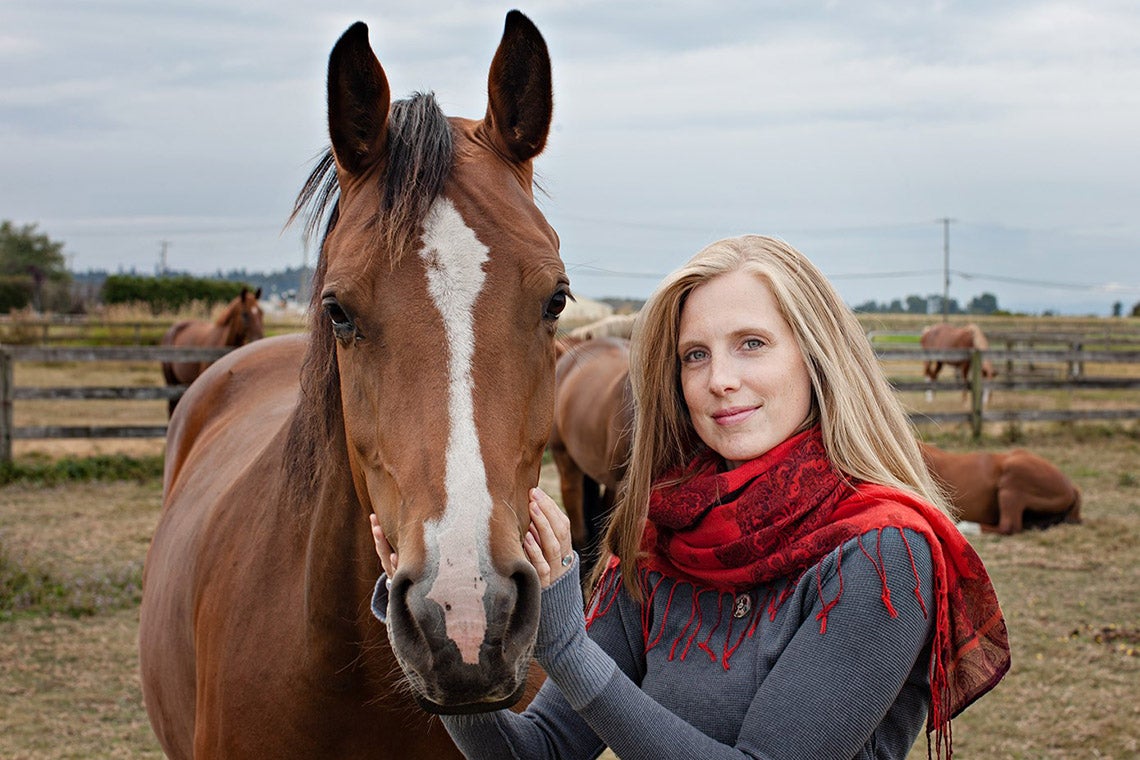 Carolyn Creed helps “big-hearted, sensitive entrepreneurs” overcome their business-related fears through meditation and self-reflection in the presence of horses, a form of animal-assisted therapy (photo courtesy of Carolyn Creed)

It all started with what Carolyn Creed, an alumna of the University of Toronto, refers to as her “shakening.”

“Life taps you on the shoulder, and when you're not listening, it just shakes you,” says Creed, a former Woodsworth College student who studied fine art in the department of art history in the Faculty of Arts & Science.

At 21 weeks pregnant with her second child, Creed’s water broke. Doctors predicted her baby had a 20 per cent chance of survival.

“I was stopped in my tracks,” Creed explains. “I had been struggling for most of my adult life with bipolar II disorder, and then this happened.”

As weeks passed and specialists were unable to provide answers, Creed discovered equine-assisted learning (EAL) – the practice of working with horses to promote personal growth. A lifelong horse lover, Creed signed up.

“For the first time, I tuned out all this noise coming at me and listened to that quiet inner voice,” says Creed. “I just heard, ‘You’re going to be OK.’”

After giving birth to a healthy son 12 weeks later, she felt compelled to pursue a career in EAL.

Today, Creed is a mindset and leadership coach and an equine-guided facilitator. She works with “big-hearted, sensitive entrepreneurs” to help them overcome their business-related fears through online courses and in-person sessions. There’s no riding involved during the on-location group retreats or one-on-one sessions, but clients practice meditation and self-reflection in the presence of horses.

Creed believes that when it comes to overcoming professional and personal obstacles, horses have a lot to teach us. “I call them ‘gentle warriors,’” she says. “They’re peaceful and non-violent. They’re actually prey animals. Their sensitivity is their superpower. That’s how they stay alive.”

The concept of horse therapy dates back to ancient Greece. Some contemporary forms of EAL – including Creed’s – take place on the ground and focus on emotional benefits, while others involve riding horses as a form of physical therapy. EAL is used for a variety of conditions, including post-traumatic stress disorder (PTSD), autism and cerebral palsy.

The benefits of animal-assisted therapy (AAT) have been widely studied, commonly through programs where therapy dogs visit universities during exam periods, hospitals and retirement homes. The interactions between humans and animals have been shown to decrease loneliness and anxiety, while improving mood and cognitive function.

Horses are unique therapy animals due to their size and hypersensitivity, says Creed, adding that they encourage self-discovery in the participant.

Creed formerly ran her own photography and professional photo album businesses, working seven days a week with her husband. “That’s the old way of thinking,” she says. “You sacrifice everything, and then maybe later you can enjoy a little bit when you're older. It doesn’t work – we need community, collaboration and connection.”

To grow her business beyond its rural roots, Creed has created a website that includes a free guide called  “The Sensitive Soul’s Guide to Impact” – and various social media accounts to showcase her photography and videography. A podcast is also in the works.

Creed set a goal earlier this year to have 100 meaningful conversations by the end of 2019. “We’re online so much and we're connected, but we're not really,” she says. So she began reaching out to family, friends and acquaintances, inviting them to a video chat. She then asks them to have a meaningful conversation with someone else and connect her with someone new who might be interested in participating.

“It’s been so amazing and profound.”

Creed says her arts degree helped her develop the flexibility and creativity to be successful as an entrepreneur. “It prepared me for the beauty of the unknown. To be an entrepreneur, you have to embrace the unknown,” she says, adding that her degree encouraged her to ask questions and think critically. “What do I want? What's this calling? And then how do I create that? Let me ask questions and really pave my own path.”

Creed describes herself as intuitive, empathetic and emotional – traits she believes are often viewed as negative. Creed, however, sees them as unique assets in the business world.

“I thought that to be an entrepreneur, I’d have to be loud and aggressive,” she says. “What I've learned is that gentle power is the superpower for people who are more introverted and sensitive. Gentle is in fact quite powerful. We can achieve amazing success.”