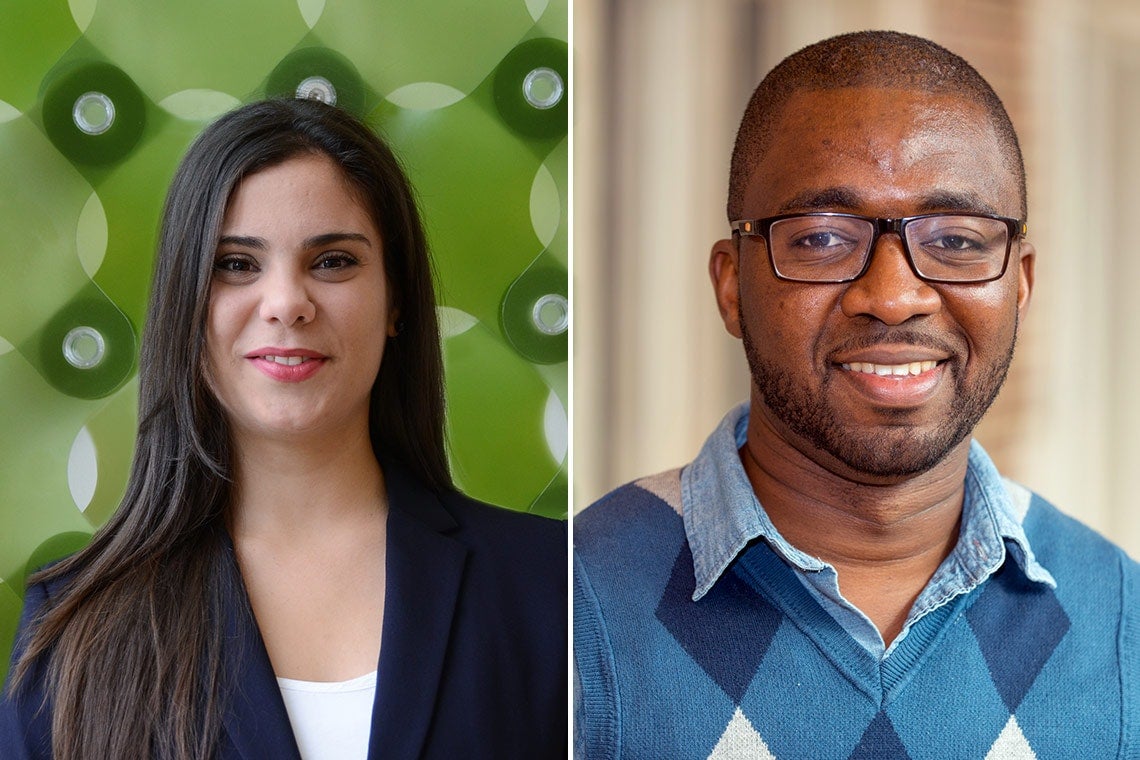 Areti Angeliki Veroniki is a statistician and scientist at St. Michael's Hospital and Ismael Mourifié is an assistant professor in U of T's department of economics (photos courtesy of Council of Ontario Universities)

Areti Angeliki Veroniki is a studier of studies.

A scientist at the Li Ka Shing Knowledge Institute at St. Michael’s Hospital, Veroniki’s post-doctoral research at the University of Toronto is focused on pulling new insights from the hundreds of medical studies done on a particular illness – right down to the level of individual patients.

Working under the supervision of Dr. Sharon Straus, a professor in U of T’s Faculty of Medicine and a Canada research chair in knowledge translation and quality of care, Veroniki is performing what’s known as an individual patient data network meta-analysis on studies pertaining to Type 1 diabetes and Alzheimer’s dementia.

Put simply, it’s a statistical analysis of the many studies done on a number of clinical treatments related to a specific illness that, unlike more straightforward network meta-analyses, still takes into account individual data from all the studies’ patient participants.

“We’re able to explore potential treatment-by-covariate interactions, which are interactions that may happen between the characteristics of the patients and the treatment effect that we’re not always able to see with aggregated data,” says Veroniki, who did her PhD in epidemiology and biostatistics at the University of Ioannina in Greece.

“We’re able to tailor the results for certain characteristics of patients that, previously, published studies didn’t address. We can then use the data that has been previously collected to explore further treatment effects – usually with greater power.”

Veroniki is one of two researchers at U of T who were honoured with this year’s Polanyi Prize, which was awarded to just five researchers in the province in total. The $20,000 prizes, in honour of U of T University Professor John Charles Polanyi, who received the 1986 Nobel Prize in Chemistry, are given to up to five outstanding researchers in the early stages of their careers who are either pursuing post-doctoral studies or have recently been appointed faculty at an Ontario university.

The other U of T winner is Ismael Mourifié, an assistant professor in U of T’s department of economics in the Faculty of Arts & Science. His current research is focused on understanding why there aren't more women like Veroniki studying STEM subjects and working in related professions.

Read about Mourifié's STEM research in the Globe and Mail

Mourifié says there are essentially two competing theories. The first hinges on the idea that women  in STEM – science, technology, engineering, mathematics – are underpaid relative to their male counterparts and therefore decide to pursue fields with less wage discrimination. The other suggests that women are steered away from STEM subjects at an early age because they’re socialized to think they belong elsewhere.

The problem, Mourifié says, is the policy solutions are very different depending on which theory one ascribes to. If it’s the latter, he says, “even if you mandate equal pay, women won’t come and your policy won’t work.”

Finding a policy solution is further complicated by the fact that what may work for a small group of survey subjects often can’t be reliably scaled up to a larger population. That’s because it’s difficult to completely take into account the myriad attitudes and perspectives – including those held by different cultural or generational groups – that may lead women to shun STEM studies. Mourifié has personal experience with feeling pressured to do things against his wishes.

Though he always wanted to pursue a career in the social sciences, when it came time to apply to university, he instead opted to accept a government scholarship to pursue a bachelor’s degree in math and physics at Sidi Mohamed Ben Abdellah University in Morocco. Why? His home country of Côte d'Ivoire was spiralling into civil war and, given his math skills, he figured it would be the most expedient way to secure a spot studying abroad.

“It was not a decision that was being made based on my preferences,” he says.

Even after arriving in Canada, Mourifié says he sometimes felt like he was being subtly discouraged from trying to complete his PhD in economics at the University of Montreal, including by well-meaning members of his own community. They felt it wasn’t realistic for someone of African heritage to aspire to become an economics professor, he says.

“One thing that’s very important to me is to show new immigrants – the new generation – that being African and coming from a small country is not something that should shape your future in Canada,” Mourifié says. “If you work hard, you should be able to make your path.

“It should be the same thing for women."