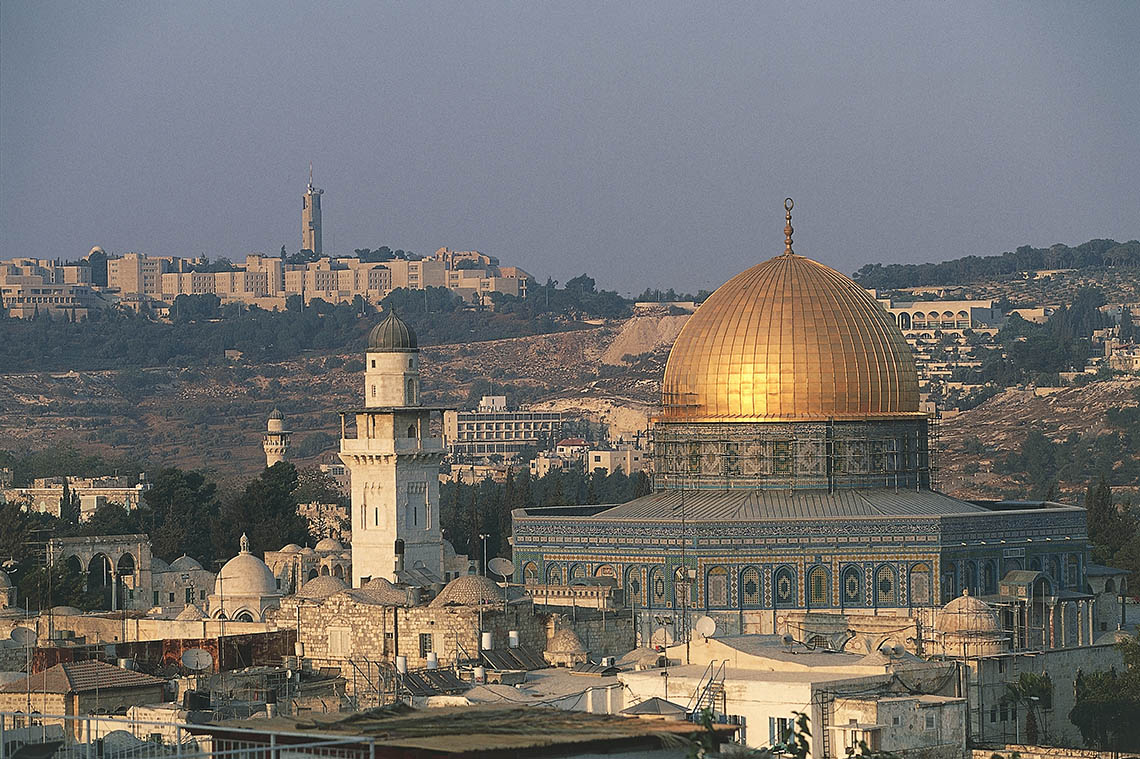 Last week, U.S. President Donald Trump unleashed new upheaval in the Middle East by declaring that the hotly contested city of Jerusalem is Israel's capital and committing to move the U.S. embassy to the Holy City.

The decision, which upended seven decades of U.S. foreign policy, has triggered protests across the world. Israeli Prime Minister Benjamin Netanyahu raised the issue again on Monday during a visit to Brussels, saying he believes eventually European countries will follow Trump's lead. The announcement has been condemned by Palestinian leaders, who see East Jerusalem as the capital of a future Palestinian state.

U of T News spoke with two university experts on Jerusalem's significance as a Holy City for three of the world's major faiths, and its disputed status.

Jens Hanssen is an associate professor of Arab civilization and Middle Eastern history at U of T Mississauga and the department of Near and Middle Eastern civilizations and department of history at the Faculty of Arts & Science. Janice Stein is the Belzberg Professor of Conflict Management in the department of political science at the Faculty of Arts & Science. She was the founding director of the Munk School of Global Affairs.

Can you explain why Jerusalem’s status is so contentious?

Jens Hanssen: Jerusalem’s status is contentious because Israel is flaunting international law, and while no relevant state has recognized its contraventions, the international community has shied away from imposing sanctions on the Israeli state. Trump and his ambassador David Friedman’s coup to recognize Jerusalem as the capital of Israel represents a major break with international consensus and with modern history.

In the 19th century, Ottoman Jerusalem was a well-run city, a magnet for Christian powers to invest in missions and churches, with a municipal council that had regular and fiercely contested elections. This changed when the British created two municipalities and divided the city into a western and eastern administrative unit sometime around 1943. When the 1947 UN resolution recommended the partition of Palestine, it stipulated that the Holy City be “established as a corpus separatum under a special international regime.”

In 1948, Zionist forces conquered western Jerusalem. The UN recognized neither this fait accompli, nor the Jordanian claim to East Jerusalem two years later. Then, in the 1967 war, Israel invaded and occupied East Jerusalem too. A PhD student of mine has recently written a dissertation on how the Arab municipality was dissolved and the Israeli mayor created a regime of de-Arabization and economic underdevelopment for East Jerusalem during his almost 30-year reign. In 1967, the UN Security Council demanded that all Palestinian, Syrian and Egyptian territories that Israel conquered during this war should be returned – including Jerusalem. Instead, the Knesset passed a law in 1980 claiming “Jerusalem, complete and united, [a]s the capital of Israel.” Again, the UN refused to sanction this and insisted that East Jerusalem was an integral part of the Palestinian territories under Israeli occupation.

Since then, Israel and its West Bank settlers have laid siege to Arab Jerusalem, encircling it with ever growing settlements, Israeli-only highways, checkpoints, etc. East Jerusalemites are stateless people who risk their residency by living outside the city. They can hardly buy property and are hamstrung by Israel’s bureaucratic red tape. Over 14,000 Jerusalemites have had their residency revoked this way and been expelled since 1967. Last summer, I visited East Jerusalem for the first time since 1993. I was shocked at the choking atmosphere everywhere, not least the spatial encroachment of the Hebrew University on Issawiyya, a Palestinian village which is a suburb of East Jerusalem. Even inside the old city, radical American Jewish settlers have started forcibly occupying buildings, unfurling enormous Israeli flags on the façades and throwing garbage on their neighbours, like in Hebron.

Janice Stein: Jerusalem is the site of historical memory for Jews for some 3,000 years and for Arabs who have lived there for thousands of years. Both Jews and Muslims attach religious meaning to Jerusalem: For Jews, it is their holiest site, and for Muslims, it is their third holiest site after Mecca and Medina.

Both religious, historical and national narratives are intertwined in a tiny geographical space that competing religions and nationalisms have never been able to share precisely because it is such a significant marker of identity and meaning.

Why did Trump declare Jerusalem the capital of Israel? Did Israel ask for this?

Janice Stein: Israel’s leaders have asked governments around the world to recognize Jerusalem as their capital for a long time. Trump’s decision is best explained by U.S. domestic politics and his desire to fulfill his promise to his base.

The following is an excerpt from Stein's recent op-ed in the Globe and Mail: Dig a little deeper and the hand of Crown Prince Mohammed bin Salman of Saudi Arabia is not hard to see. Saudi Arabia's conflict with Iran is intensifying. The assassination of the former president of Yemen, Ali Abdullah Saleh, by the Houthis, whom Saudi Arabia sees as the allies of Iran, pushes the prospect of any resolution of this conflict far off into the distance. Saudi Arabia faces a deepening of a quagmire directly on its southern border. The crown prince has been quietly encouraging Israel to act more vigorously against militias in Syria that are supported by Iran. Not that Prime Minister Benjamin Netanyahu needed much encouragement: Syria is on its northern border and Israel's government, like the Saudi government, sees Iran as an overwhelming threat.

Prince Mohammed, or MBS as the Americans call him, apparently had a testy meeting with Mr. Abbas [the Palestinian president, Mahmoud Abbas] last week. Not for the first nor for the last time in Palestinian history, Mr. Abbas was metaphorically told to take what was on offer now because the offer would get no better and, anyway, the Saudis and the Arab world had bigger issues to worry about than the borders of a Palestinian state. Make a deal, he was told, and get out of the way so that we can build the coalition that we need to confront Iran.

Not surprisingly, Mr. Abbas was not receptive, and so the conflict goes on, as it has for the past 100 years. Leaders flirt with history, manipulate symbols, tell stories, respond to domestic political interests, but the conflict goes on. That has not changed.

Read more of Stein's op-ed in The Globe & Mail

Jens Hanssen: Back in 1995, a Republican Congress passed a law recognizing Jerusalem as Israel’s capital and demanding the government move the U.S. embassy there. Since then, every president had to sign a waiver every six months to postpone the relocation. It is nuts!

And remember, Trump is only coming good on his election promise. In fact, I recall he boasted that previous presidents had merely campaigned on this issue, but only he has come through. Previous presidents were probably dissuaded by wise advisers and international lawyers. But Trump has sacked any knowledgeable staff that he may have had. And he picked his friend and bankruptcy lawyer, David Friedman, as U.S. ambassador to Israel whose only knowledge of Israel comes from heading the American Friends of Bet El organization that is funding the colonization of the West Bank and has worked to derail the two-state solution since the 1990s.

Nevertheless, Trump’s decision is also whimsical and first and foremost a domestic issue, and he seems to have broad support among his base. Internationally, this move may destroy the recently concocted unholy alliance between Prime Minister Benjamin Netanyahu and Saudi Arabia’s Crown Prince Muhammed bin Salman, and it looks like the United Sates’ Arab allies were not considered in the matter. Even Egypt, whose moribund economy so depends on U.S. and Saudi largesse, has rejected this unilateral move. With the crises in Yemen and Syria showing no signs of abating, and Saudi, Israeli and American lust for military action against Iran growing, opening the Jerusalem question is reckless.

Netanyahu may be celebrating this as a victory publicly – he called it, and you cannot make this stuff up, “a great victory for peace.” But, I doubt he’d have wanted Trump’s statement at this time. Better timing for Netanyahu would have been to wait until after the Saudis were engaged militarily with Iran first.

What’s the value in this for America or for Trump?

Jens Hanssen: Judging by past history, Trump needs to lead America to war if he wants to win a second term. Up until now, the candidates for war were Iran and North Korea. Given how bankrupt the U.S. treasury is, Trump will need reckless allies to do the heavy lifting and then rally the American public opinion behind the cause without the military and human costs of the Iraq and Afghanistan invasions. Israel today is so right wing and reckless that it might be a willing instrument in such a scheme. I see no value in Trump’s venture for America, particularly Americans abroad.

Janice Stein: There is no foreign policy upside, only downside, only benefit to his domestic base.

Anyone who knows anything about Mideast politics would know that this would trigger unrest and violence in the region and kill the peace process. Was Trump not aware of this, or has he written off the peace process?

Janice Stein: It is not clear at all that he has written off the peace process.

His words were circumscribed although his tone was not. In fact, his speech was tone deaf to the concerns of Palestinians. It is possible that he may be planning to ask Israel’s government for a concession that is of the same order of magnitude of the gift he gave, once the rage dies down.

Jens Hanssen: The so-called peace process has been killed so many times that perhaps now the general public might finally stop pretending otherwise. The last semblance of a viable peace initiative was launched by the Saudi government in 2002. It was endorsed by 21 Arab states in 2007 and offered Israel recognition of its right to exist and a normalization of diplomatic ties in exchange for acceptance of the establishment of a sovereign independent Palestinian state, with East Jerusalem as its capital. Radical Palestinian factions, Syria and the Israeli government rejected the deal.

Today, the American and Israeli governments have dropped the façade of the peace process and are set to impose, with or without Saudi help, a series of gradual administrative and ad hoc military measures to push the remaining 400,000 Palestinians out of East Jerusalem and establish a fait accompli with the settlements in the West Bank and the Syrian Golan Heights.

With Trump's totally gratuitous statement on Jerusalem and the total disregard for Palestinian life and property, the legitimacy of Palestinian resistance will only grow.

Reflecting on all this terrible news, I cannot shake off the image of Trump as a Nero figure taking down not just his own country in the space of four, maybe eight years, but also the whole Middle East with it.