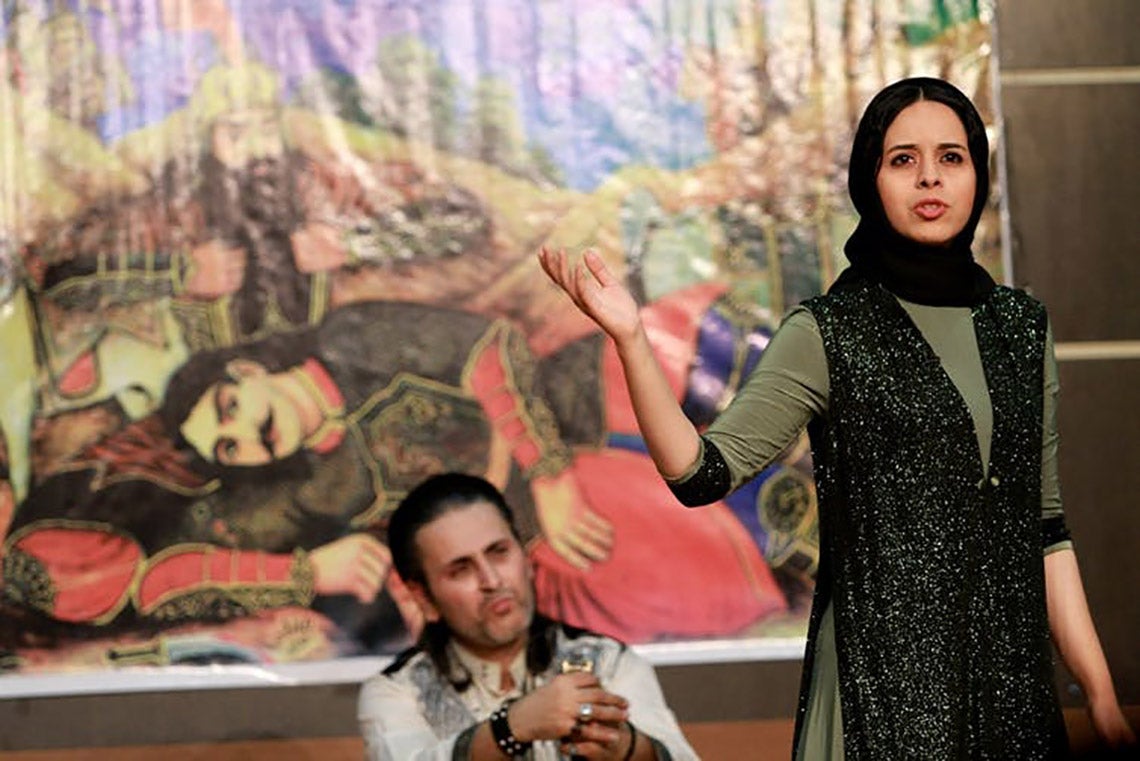 In the summer of 2015, I conducted fieldwork in Tehran and Qom, Iran, with a small team of colleagues from Iran and Australia.

During that summer I got to know Bahareh Jahandoost, a performing artist and educator trained in traditional Persian storytelling. Jahandoost works with Mehdi Khosravi, a journalist and social activist employed at the Iranian Medical Council, our team’s co-host organization, along with Tehran University’s Medical Ethics Center.

During my stay, we discovered the three of us share an interest in political borders and countering the harshness and violence that state borders impose. As artists and writers, we also share similar approaches when confronting these issues.

In my scholarly work and installation art practice, I look at how migrants and people with illness and disability experience social and material disadvantage and harms systemically over time.

Khosravi and Jahandoost bring literature, performing arts and new media together to express Iranian society, with all its complexities. One of the key things about all of our practices is that we produce narratives – alternative to the mainstream – about the people and places we know.

For the past three years, we have been collaborating on a project, We Beyond Borders, that debuted in Tehran in May.

We Beyond Borders explores answers to questions of universal concern: What is it like and what does it mean to be human in the 21st century? What does life feel like every day for people who walk in different shoes?

The idea seems simple, but it is subversive, too, since the project puts people’s everyday experiences at the centre. These experiences include people’s (our) effort and hard work navigating and resisting the physical and emotional discomfort that borders make us endure.

We intend to spark a soft-edged revolution through storytelling and performance, while connecting the ancient and contemporary.

At the project’s launch, Jahandoost assumed centre stage as a Naqqal, Persian for storyteller.

Jahandoost has been involved in theatre since she was seven years old, and she trained with the renowned Iranian Naqqal, Morshed Vali-Allah Torabi. Using the traditional form of narrating stories through Naqqali theatre, she has performed in China, France, Hungary, India, Italy, Russia and Turkey.

She says: “I perform publicly by narrating epic stories sourced in classical literature and folk texts. These are popular and widely known and appreciated throughout Iran…The most fabulous and famous piece of Persian literature is Shahnameh…It is an immensely rich source of seemingly countless tales – both of love (Manijeh) and tragedy (Tahmineh). I interpret stories using my body: gesticulating and moving, theatrically. What I do educates, entertains and enlivens peoples’ imaginations and spirits…I experience profound joy seeing people moved by stories I perform.”

As a Naqqal, Jahandoost regularly appears on the radio, and she is also the star of a television program for young people that airs across Iran. “Something delightful is that more and more young people are interested in traditional storytelling.”

Telling stories has the potential to cultivate and craft a future where we can imagine people relating to each other with empathy. “The world over, people can be and are inspired by stories,” says Jahandoost.

With We Beyond Borders, we aim both to spark new and support existing interest among people who want to know how to connect the ancient with the present, and to learn from these continuities. As Jahandoost says, “Nature and ancient and old wisdom are within us, or can be reclaimed. The want to be transported beyond what we know, into other realms, is a shared human impulse. The religious person may seek to be heaved toward Heaven. The spiritual person may seek to be inspired by the sensual.”

In the past decade, state media in Iran have given Naqqali a high profile by investing in opportunities for it to be broadcast on television and heard on the radio. Part of the reason is that Naqqali is listed in UNESCO’s repertory of endangered cultural resources in Iran.

Although Khosravi believes this is a positive trend, he says “the best and necessary place for this genre is live, in theatre form, done in front of, for, and among living and breathing people. Its promise and transformative capability are realized when experienced in person.”

Yet, Khosravi still believes Naqqali can co-exist in two forms: performing for an audience and performing for a lens or microphone. The forms do not have to compete, he says.

Jahandoost, as a television and radio personality, understands this issue as well because it presents an interesting dilemma for her work. She agrees that we must question and reflect on the “gains and losses through our interactions with technology and our relations to each other.”

Thanks to new media, people everywhere have access to her work, she says. This new access means that people globally can learn about others “in defiance to national borders that hem them, as their and our way of talking back to borders.”

We Beyond Borders plans to perform to Canadian audiences soon, and is looking for venues to do so. In juxtaposition to ancient and historic audiences who were the first to experience performances of The Shahnameh (the story of kings), big swaths of Iran’s resident population today are highly literate and highly educated. This includes the country’s sizeable diaspora arts communities throughout the world.

Since our global borders and bordering practices are troubled and troubling, and no more so than for mobile, migrant and immobile people whose struggles lie at the heart of We Beyond Borders, we endeavour to inspire and transform.

We begin where we stand: Among our students and interested members of the general public in Iran, Canada and places in between and beyond.

In particular, audiences of young women, for until recently, Naqqali was performed and seen by men in streets and coffee houses in Iran. Today, however, the possibility of being a Naqqal is open to everyone in Iranian society, and so there are women narrators such as Jahandoost, who says, “I am very aware of how gender shapes my work, and I am also aware that I am a role model to younger women who might, after seeing me perform, feel inspired by the simple fact of seeing me in a lead role…When young women encounter a woman telling ancient Persian stories, they might imagine themselves standing in the very same position. This is thrilling!”

Laura Bisaillon is an assistant professor in health studies at the University of Toronto Scarborough.