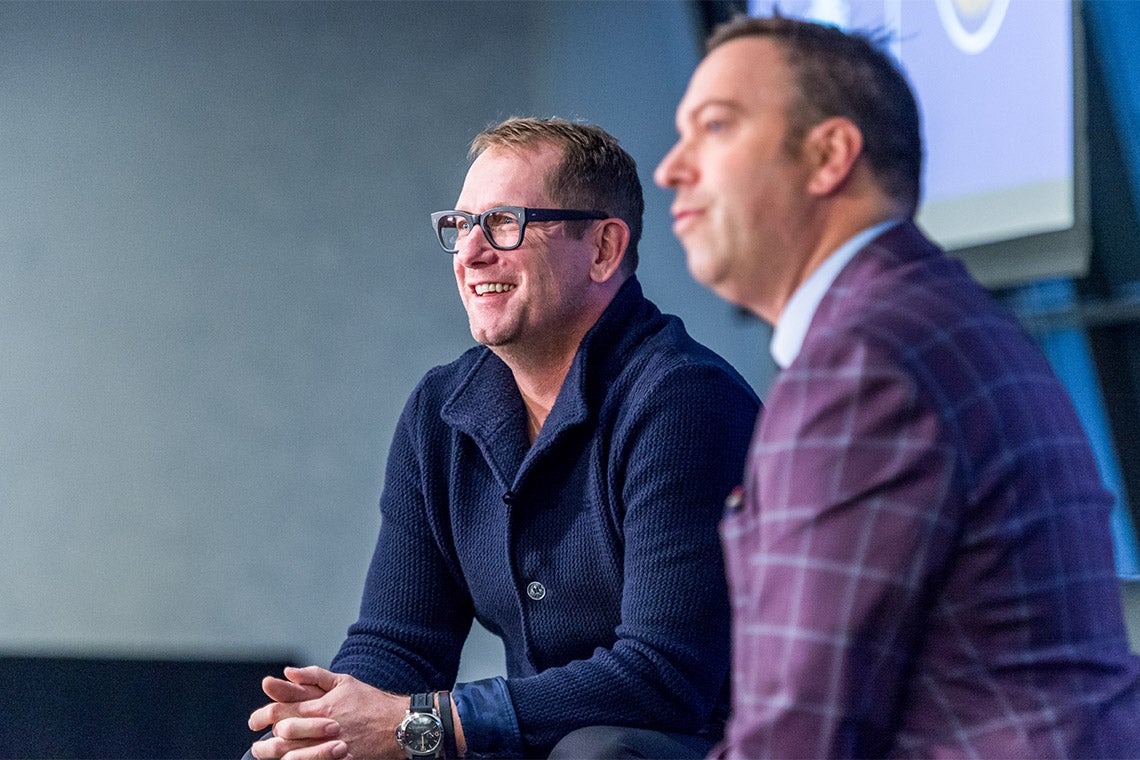 Nick Nurse, head coach of the Toronto Raptors, slipped the team’s diamond-encrusted championship ring off his finger and passed it around a packed room during a University of Toronto fundraising event earlier this week.

Sports journalist and broadcaster Elliotte Friedman, who was moderating the Basketball Excellence Program (BEP) event, asked Nurse what pops into his head when the ring goes on his finger.

Nurse was invited to the inaugural fundraising event, held at the Toronto Region Board of Trade, to discuss his team’s journey to the NBA championship. BEP was initiated as part of U of T’s commitment to athletic and academic excellence, and to further support the social and leadership development of its students.

U of T President Meric Gertler and Dean of the Faculty of Kinesiology & Physical Education Ira Jacobs were on hand to welcome the guest of honour.

“The university’s commitment to excellence is something we share in common with the Raptors. But our connections go deeper,” said President Gertler, noting U of T’s Chancellor Emeritus and former Ontario Premier David Peterson was the founding chairman of the Raptors. As well, many of the team’s supporters – doctors, therapists, dentists and coaches – have ties to U of T, while the university’s venues have hosted Raptors’ practices, tryouts and camps.

“Even the Raptor, the famous mascot for the team, made his debut at U of T during the high school all-star game between Toronto and Michigan – a little known fact,” President Gertler said.

“Perhaps most significantly, the Raptors and U of T are both massive city builders. Whether it’s through our athletics facilities or the knowledge capacities we build, U of T’s nearly 200-year-long relationship with Toronto has literally transformed this city. The Raptors aren’t quite as old as we are, but the team has brought this city together like never before.” 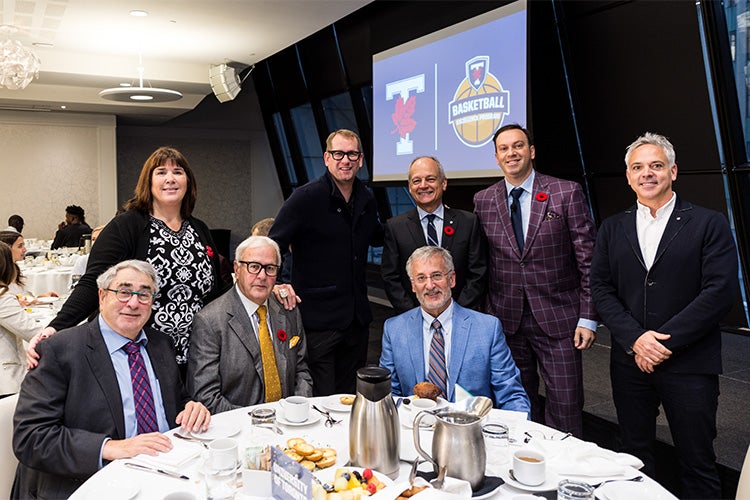 Nurse, for his part, suggested the team also brought the world together. Asked by Friedman about what it meant to be part of a group that brought the championship title to the city, he said it meant a lot to see the jubilation and celebrations across Canada, but what was really unique was seeing the team become “kind of the world’s team.”

“There were a lot of people around the world rooting for us,” said Nurse. “We had a really likeable team, who were playing their hardest, playing together, sharing and playing great defence.” 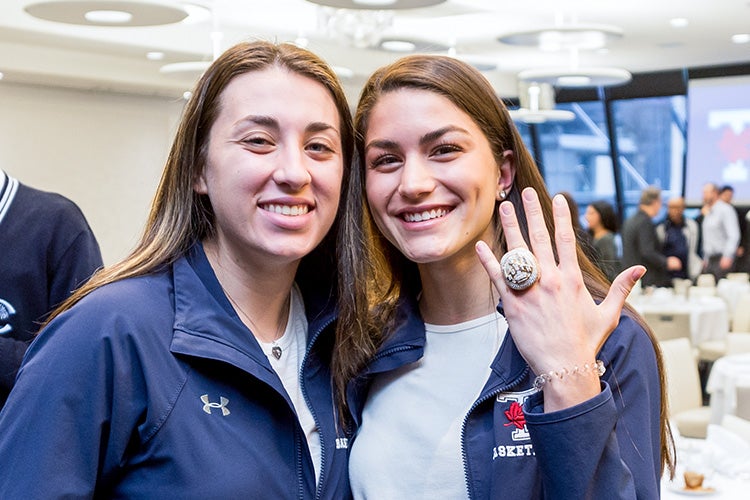 Nurse shared a story from his coaching days with the Birmingham Bullets in the mid-1990s. After a lost game, Nurse overheard someone in the U.K. organization describe it as typical Birmingham Bullets basketball. When Nurse went back to his hotel room that night, he decided he needed to change the organization’s mindset.

“I wrote on a piece of paper ‘expect to win’ followed by two good-size paragraphs about how everybody in the organization – when they come to the arena on game night or when they get on the bus to go for a road game – would need to have their mindset set to ‘we are going to win’. Whatever the circumstances, however many guys are in or out, regardless of whether we’re losing or not, we were going to be going for the win,” said Nurse.

The Bullets went on to win the British Basketball League championship in 1996. On day one of training camp with the Raptors last year, the players all got wristbands that said “expect to win.”

Nurse told the crowd he wasn’t transfixed on becoming an NBA championship coach, but he always knew he loved basketball and winning. So, he was surprised when he took on a coaching position in the NBA D-League (now G League) that he wasn’t winning more, despite having nine championships from Europe under his belt. Nurse and his assistant coach Nate Bjorkgren spent hours every day trying to figure out how to win more games. They decided that they would focus on four things: getting the best players; building offensive and defensive systems that were simple and effective; and preparing for the ends of each game.

“Games in the NBA are really close. A lot of them come down to those last three or four minutes. I put up huge dry erase boards on the walls of my basement and I’d write at the top of one of them: ‘It’s a tie, with 38 seconds left.’ Then we’d jot down ideas – like put my best offensive players out, consider going two for one, run player number four … We’d go through hundreds of scenarios and solutions because we wanted to be totally prepared.” 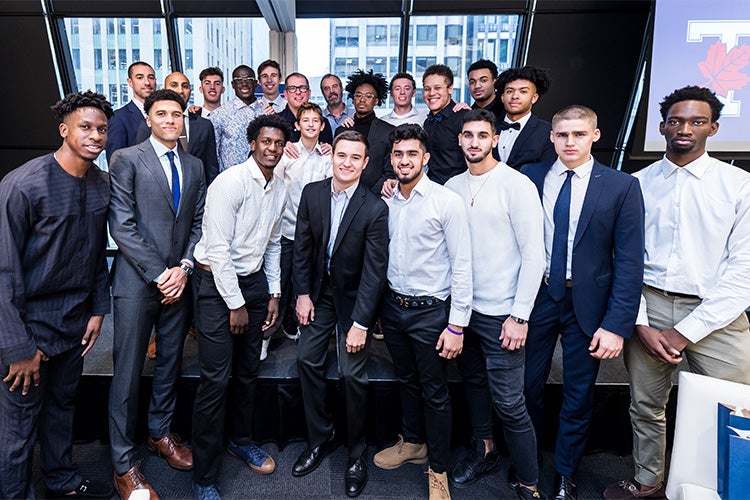 Nurse also shared valuable advice he received from other coaches, singling out a meeting in Montana with 11-time NBA champion Phil Jackson. Jackson picked him up at a coffee shop with his truck and then pulled over by the side of the road to buy a bag of cherries.

Jackson gave Nurse two pieces of advice: He told him never to underestimate the power of the basketball gods and to imagine that he’s got a sword.

“Use the sharp end to push those guys, to prod them, but every once in a while look at the handle. Let it symbolize compassion to help you understand where they’re coming from and what they’re going through,” said Nurse.

Friedman wanted to know who on his team responds well to the tip of the sword and who needs to be dealt with compassion.

“They all need both at different times,” said Nurse. “They all want to be coached. This is their livelihood. They want you to put them in a position to be successful. They want you to give them a game plan. They’re out there playing 25 to 30 minutes, scoring points night after night, talking to the media afterwards – that takes a lot of physical and mental energy. So, for the most part, it’s your vision and how you are running things day-to-day that sets the tone for all of that.”

There are ups and downs in play and confidence, he added. After a less-than-impressive game in Orlando during the playoffs last year, Nurse told Kawhi Leonard, Kyle Lowry and Fred VanVleet that they were the stars of the team and needed to be better.

“They came out in game two and played the best defence ever,” said Nurse.

Friedman wanted to know how the team blows off steam. Do they go bowling?

“I’m not crazy about that idea, but we had an incredible Halloween party,” replied Nurse, disclosing that he dressed up as Elvis Presley. “We have a ton of fun – we’re the first team to have a deejay at practice.” 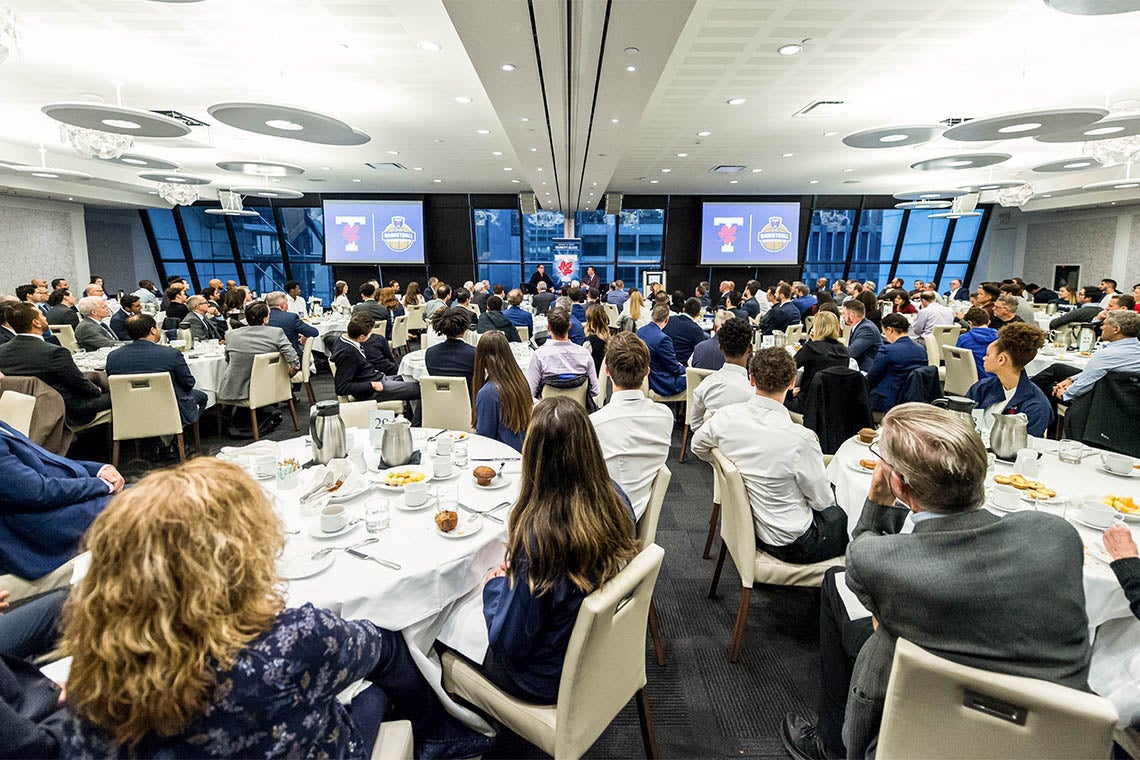 A Varsity Blues basketball player wanted to know what Nurse preaches all the time that gets overlooked by players.

“Shooting. I don’t understand why more players and coaches don’t devour the art of shooting, why they don’t study it and practice it more,” said Nurse. He noted that VanVleet was struggling early on in the playoffs, getting three three-pointers blocked in one early game against Orlando.

“We said, ‘Let’s get you out of the corners, let’s move you five feet behind the arcs,’ and he went to work like crazy.”

Another member of the audience wanted to know how attitudes have changed since Leonard’s departure. Nurse said he hadn’t noticed a difference and that players still love coming to Toronto to play the Raptors.