From Tokyo to Toronto: U of T students exchange knowledge 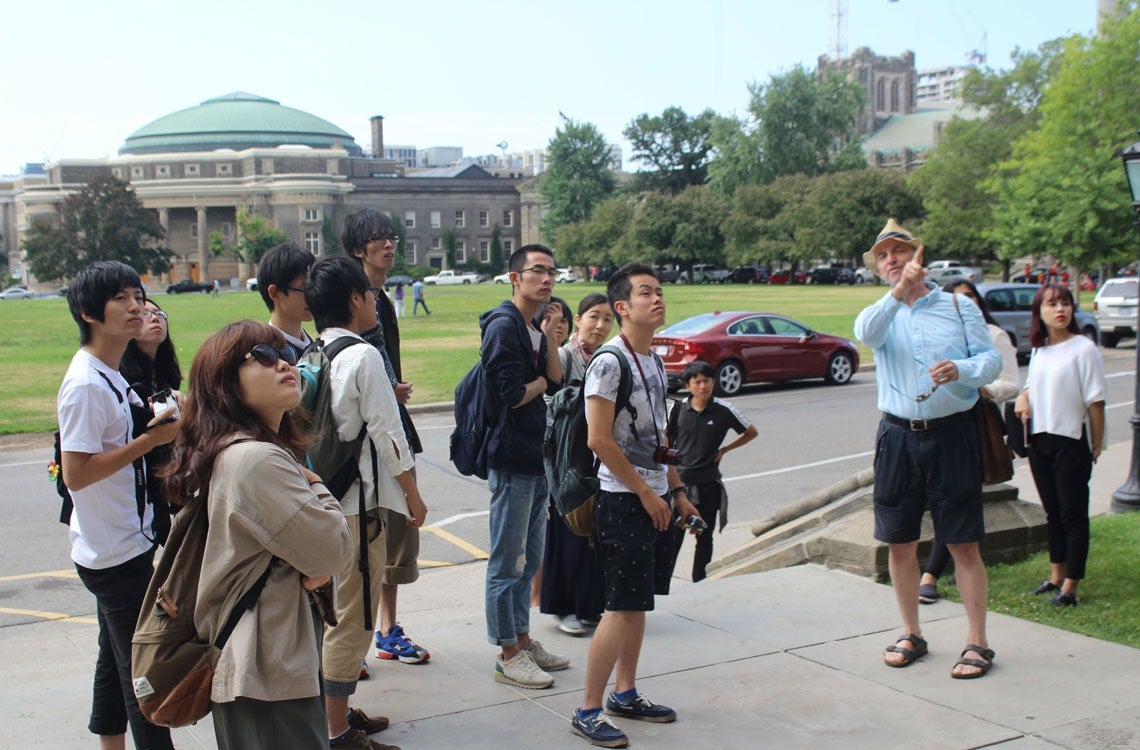 Not even jet lag can stop these future Japanese city planners from enjoying the sites that Toronto has to offer.

Students from the University of Tsukuba’s graduate program in Urban Planning are participating in an exchange with U of T Scarborough City Studies and Human Geography students.

As they walk through the bustling streets of the Spadina area, one Japanese student makes an observation that would seem surprising to a Toronto resident.

“It’s so much more peaceful here.”

From July 2 to July 9, 10 UTSC students travelled to Tokyo to learn about Japanese planning and the history of the city’s urbanization plans. They went on walking tours and attended seminars about recent planning issues, led by their Japanese counterparts. On July 10, they were accompanied by 13 Japanese students as they returned to Toronto.

Now, it’s the UTSC students’ turn to present workshops on local city planning issues and take their colleagues on tours of the city. The Japanese students will be here until Sunday. For the UTSC students, the trip is part of the course GGRC54H3, taught by Professor Andre Sorensen. He says that this hands-on approach puts all of the things that his students have learned into good use.

“They’re all experts on Toronto. So it’s a valuable project for them to prepare seminars to present the city's urban issues to our guests and think through the differences between Tokyo and Toronto,” Sorensen says.

“Urban planning programs all over the world have different types of curriculum. Even some of the basic principles can be very different. I want my students to understand this and inform their future studies and professional work,” Fujii says.

For student Shohei Ono, getting over the culture shock is an education in itself.

“This is my first time travelling outside of Japan. I’ve never even been on an airplane until now,” says the first year Masters student.

Walking through the grounds at U of T’s St. George campus, Ono wants to learn about how the city preserves its historical sites.

“I was pleasantly surprised by the diversity of the people here. In Japan, we basically only have Japanese culture. Here cultures and peoples from all over the world are represented,” Akiho says.

So far, the Japanese students have gone on tours of Fort York, the Toronto International Film Festival building and Evergreen Brickworks. On a tour of Kensington Market, they heard from Yvonne Bambrick, founder of Cycle Toronto and author of The Urban Cycling Survival Guide to learn about the issues facing Toronto’s roads, motorists and cyclists. From UTSC students, they also learned about projects such as urban intensification in the King-Spadina neighbourhood and the Project under the Gardiner, which was covered by fourth year UTSC student Mahrukh Shabbir.

As she shares some candy she bought in Tokyo with her new friends, she reminisces about her time in Tokyo.

“They are so friendly and polite. When you bump into someone they will be the ones to apologize to you,” Mahrukh says.

She also realized that Toronto has much to learn from the Japanese, in terms of city planning. Particularly, she was impressed by the level of public involvement that the Japanese were able to muster in certain projects, especially those in their suburban neighbourhoods and how they were able to utilize technology to encourage participation.

“They have portals where people can identify and map their issues. Then they offer crowdsource funding and people actually donate, “she says. “For example, if I believe that there should be a stop sign in a certain intersection where there isn’t one I would go to the local community manager. Then they would help me set up a funding page where anyone can donate. Actually, their projects get overfunded in a way because so many people donate.”

This kind of new insight is exactly what Professor Sorensen hopes the students will gain from the exchange. Sorensen says that in the future, students will be able to go on exchanges to other cities such as New York, Chicago or Montreal.

“Working and living in a single city, you have often too much information. It’s hard to see the basic contours of the issues,” he says. “Whereas when you’re comparing different cities you see the big issues more clearly.”