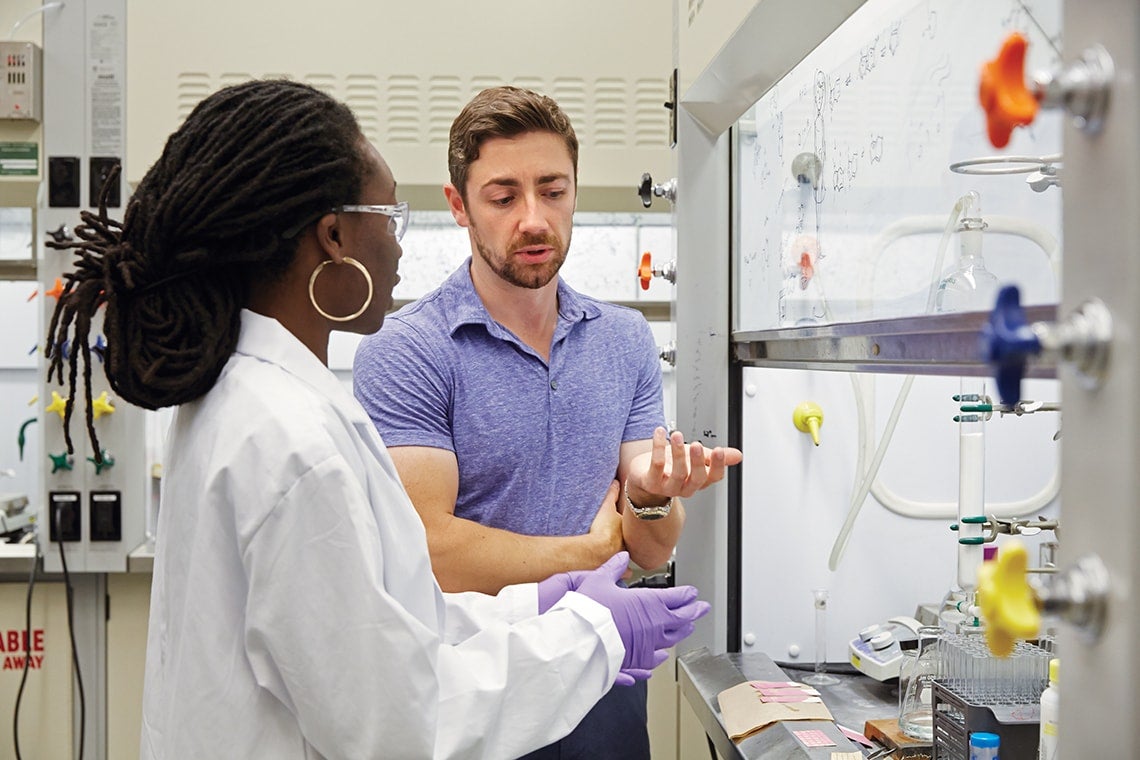 Patrick Gunning, a cancer researcher at U of T Mississauga, at work in the lab (photo by Paul Orenstein)

Three University of Toronto faculty members – all working on critical health research – made Canada’s celebrated Top 40 Under 40 list this year.

“It’s an honour to be named to a list of such distinguished people,” said Gunning of the list, which was started in 1995 by the Toronto-based global executive search firm Caldwell Partners.

“It’s important to me to do science that can help patients and make a positive contribution to health care.”

Gunning and his 35-member team test medicinal compounds that can disrupt protein-protein interactions – hubs of protein activity in the body that contribute to cells becoming cancerous.

Gunning said many researchers shy away from this area of cancer research because of its considerable complexity, but that it’s worth the extra effort because it could yield more effective and less toxic treatments.

“Most acute myeloid leukemia patients can’t tolerate the level of toxicity that comes with high doses of radiation, chemotherapy and bone marrow transplants so they may have to stop treatment, and because of that, the cancer progresses,” Gunning said. “If we can be more targeted in how we go after cancer, we can provide patients with better treatment and cause them less harm.”

Like Gunning, the other U of T faculty landing on the list are making a similarly outsized impact in their respective fields. 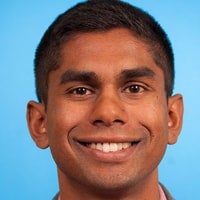 Persaud (left), a staff physician at the department of family and community medicine at St. Michael’s Hospital, made waves earlier this year when research he co-authored led a major medical journal to rethink support for the oft-prescribed morning sickness drug Diclectin.

His research involved revaluating a 40-year-old study that had underpinned the drug’s approval in the U.S. and Canada.

It turned out to be flawed.

“The routine practice was to offer Diclectin to all women who came in seeking treatment for nausea and vomiting during pregnancy,” Persaud told the Toronto Star earlier this year.

“Pregnant women might be disappointed to learn that a study underlying the previous recommendation for this medication was flawed and inaccurate. That has now been confirmed by the journal that published the original guidelines.”

Voineskos, who holds a Canada Research Chair in Neuroimaging of Schizophrenia, uses neuroimaging and genetics techniques to map gene effects in the brain in the hope of identifying “vulnerability pathways” that could lead to severe mental illness.

In addition to his associate professor role at U of T, Voineskos (right) is also the director of the Slaight Family Centre for Youth in Transition and the head of the Kimel Family Translational Imaging-Genetics Laboratory at the Centre for Addiction and Mental Health. 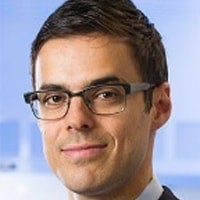 Since studies show that children diagnosed with conditions like autism or ADHD face a higher risk of developing psychosis later on, part of Voineskos’s research involves determining whether there are any markers that could serve as red flags for physicians.

“Early identification makes a big difference in how these people do,” Voineskos told U of T News earlier this year.

“We’re wondering if effective care for young people with those other conditions might in fact reduce the negative effects or eliminate the chance of experiencing symptoms of psychosis altogether.”

Vivek Goel, U of T’s vice-president of research and innovation, said the university was pleased to have the three faculty members appear on this year’s top 40 under 40 list.

“Patrick Gunning, Nav Persaud and Aristotle Voineskos are all doing amazing work that has the potential to radically transform the health of millions of Canadians and people around the world, from cancer treatment to enhancing the ability of primary care to address health inequities and helping young people with emerging mental illness,” Goel said.