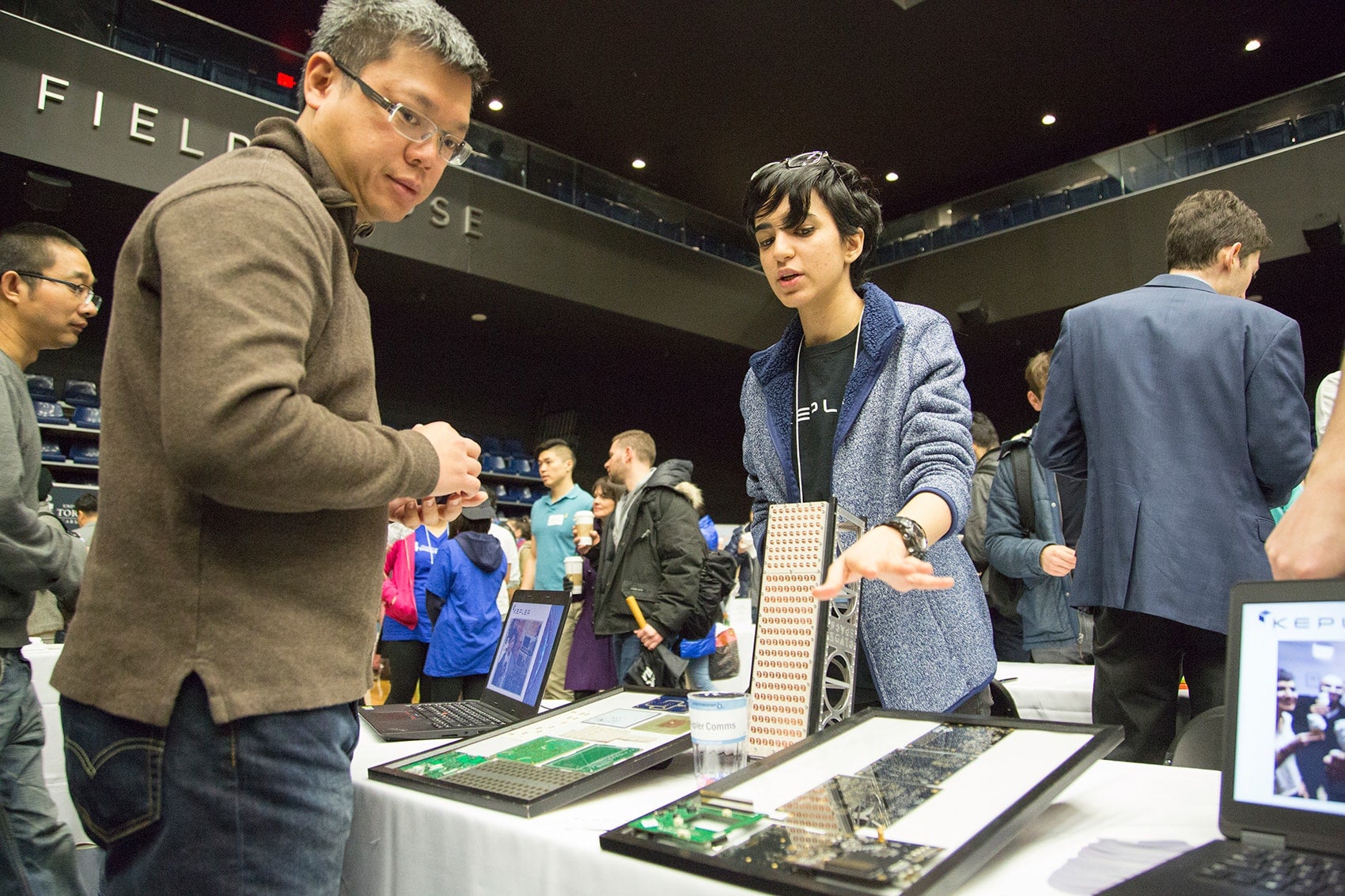 They pitched, they networked, and they demoed – fledgling student entrepreneurs worked the room at the Startup Showcase, the final event in the first-ever Entrepreneurship@UofT Week.

“I haven’t had time to move!” said a grinning Morvarid Sadinejad, a hardware engineering intern with Kepler Communications, who had been manning her booth for seven hours to showcase the company’s nano satellites.

“One of the coolest things is that people seem to be genuinely excited about what we’re doing,” added Kepler systems engineer Michael Jonas.

“We had one guy come by like three or four times . . . He said ‘I just keep coming back because what you guys are doing is just so cool,’” Jonas said. “That was a sentiment shared among a lot of people. It was a fun event for us . . .There’s a lot of talent here and a lot of interesting companies.”

Kepler, which was started by an award-winning team of engineering alumni, was one of more than 60 businesses taking part in the event at U of T's Goldring Centre for High Performance Sport – an impressive showing of the more than 150 new startup companies created at U of T in the last five years from research and innovation taking place across all three campuses.

The diverse array of businesses on display ranged from a financial app targeting millennials to a machine that helps turn restaurant food waste into valuable raw materials using a secret sauce: bacteria.

The highlight was Geoffrey Hinton, a U of T University Professor Emeritus in computer science and chief scientific adviser of the Vector Institute. Organizers added extra seating to accomodate the turnout for his RBC Speaker Series talk on deep learning and its applications.

John Polanyi, Nobel Prize Laureate and University Professor, described the scene as a “rock star festival” as he introduced his colleague and fellow scientific giant – with an audience seated up to the rafters and spilling over into standing room only areas at both sides of the stage.

Read more about the Vector Institute 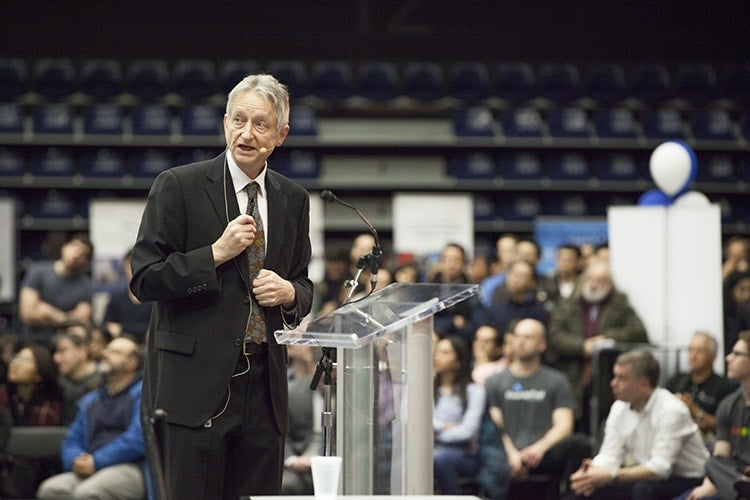 University Professor Emeritus Geoffrey Hinton, who will be chief scientific adviser of the Vector Institute, talks about deep learning at the RBC Speaker Series (photo by Johnny Guatto)

Alexis Morris was among the hundreds eager to hear from the “godfather of deep learning.”

“I came today very excited to learn more about where some of the directions for deep learning are headed in terms of this entrepreneurial space. Dr. Hinton is one of the leaders in this space, and I really wanted to hear some of his perspectives,” said the postdoc researcher in cognitive engineering who has often considered the idea of starting his own startup.

Professor Cynthia Goh, academic director of University of Toronto Entrepreneurship, which put together the event, estimated up to 3,000 people had visited the Startup Showcase by noon.

“People were beating on the door to open at 10 o’clock,” she said. “We hadn’t finished [setting up] yet, and 200 people rushed in as soon as we opened the door.”

“All of the events have been well attended this week,” she said. “Everybody is getting the buzz that there are things happening at U of T. We’ve had many things happening here and there, but this is the first time we’ve put it all together so that our community – our students, our alumni, the outside – can see and be a part of the real excitement [in the entrepreneurship space] that is going on here.”

In the afternoon, 10 finalists participated in a five-minute, pan-university pitch competition. At stake: $50,000 in prize money from the RBC Prize for Innovation & Entrepreneurship to help take their businesses to the next level. 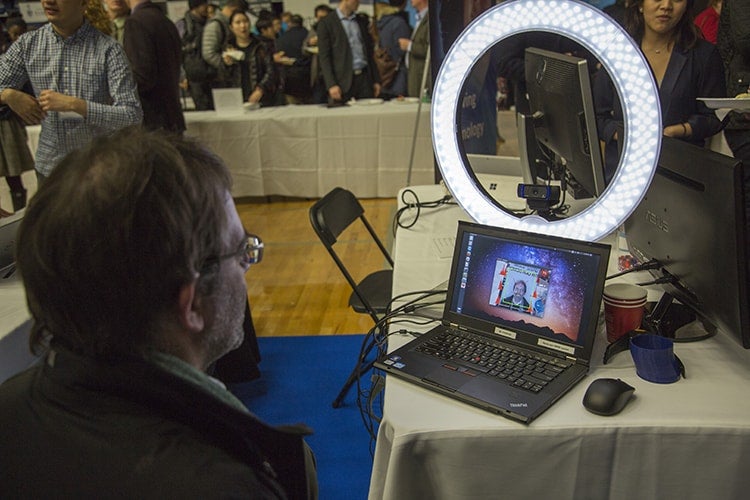 A participant tries out the NuraLogix booth (photo by Johnny Guatto)

“I was impressed by the quality and the sophistication of the pitches by these young entrepreneurs,” said Woo. “RBC is pleased to be playing a role with the University of Toronto in helping them take their amazing ideas and inventions to market.”

The other finalists in the RBC Prize for Innovation & Entrepreneurship included: Dash MD, Polumiros Inc., SHIELD Crypto Systems, Trexo Robotics, ToBe and Vicis Labs. (Read more about how Vicis got its start.)

Everyone who visited the Startup Showcase also had the chance to vote for their favourite startups. Dash MD was named the Investor for a Day, winning $500, and ToBe was named the People’s Choice Award, winning a $1,000 prize.

“You can be an entrepreneur in your backyard, but at U of T it’s different,” Goh explained. “At U of T, research, innovation and entrepreneurship are all connected – that distinguishes [us] from anything else going on.” 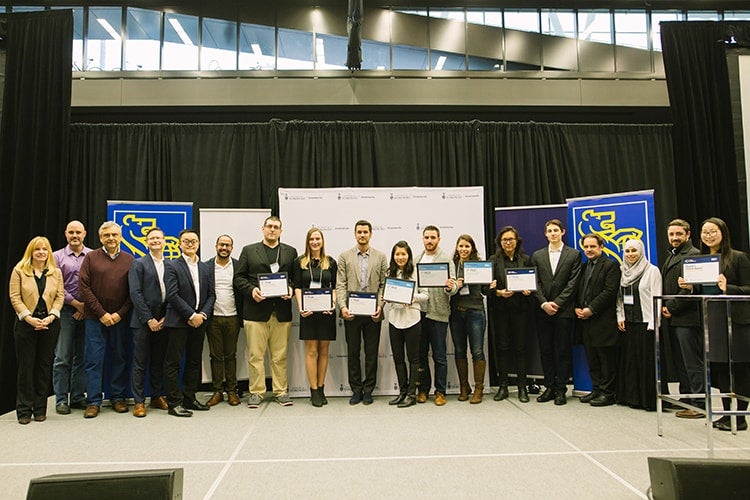