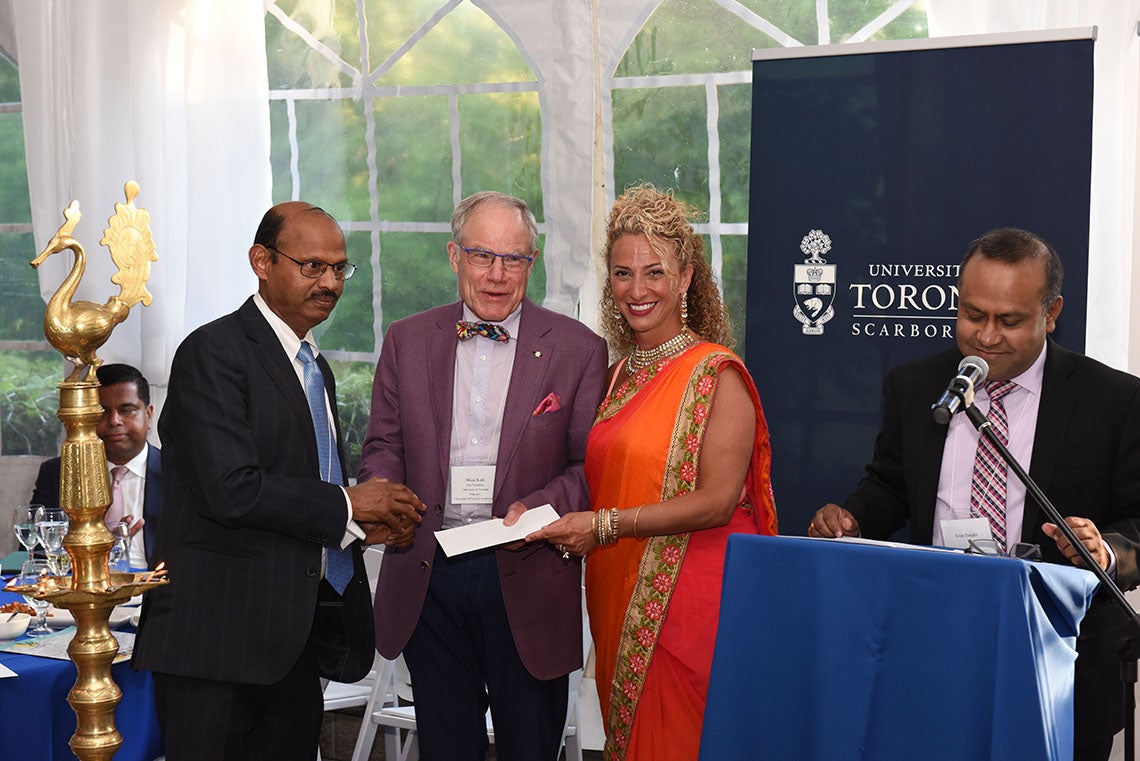 Dr. Vijay Janakiraman (left) is greeted by Bruce Kidd and Georgette Zinaty, executive director of development and alumni relations at U of T Scarborough. Sivan Ilangko is at the podium (photo by Don Campbell)

A group from the Tamil community in Canada and the United States is teaming up to pledge $3-million to create a chair in Tamil studies at the University of Toronto Scarborough.

The pledge, made by Tamil Chair Inc. and the Canadian Tamil Congress, includes raising funds to support an endowment for a full-time chair position that will explore aspects of Tamil language, history and culture through research and scholarship.

“Language is an integral part of Tamil identity," says Sivan Ilangko, vice-president of the Canadian Tamil Congress and a director of Tamil Chair Inc. “This initiative will not only help the academic advancement of the language, it will help open it up and share it with the rest of the world.”

The pledge comes on the heels of two recent gifts made to support Tamil studies at U of T Scarborough. Ravi Gukathasan, a U of T alumnus and Scarborough businessman, donated $2-million in 2017, while earlier this year Brenda Beck, an adjunct professor in anthropology, donated $327,000 to support programming and digital archiving.

“This commitment to establish a chair in Tamil studies is truly inspiring,” says Professor Bruce Kidd, vice-president of U of T and principal of U of T Scarborough.

“The Tamil language, history and culture are such an important part of the human experience and the story of immigration and refugee settlement in Toronto, that we are delighted to be able to strengthen Tamil studies at UTSC in this way.”

Tamil is one of the world’s oldest and longest-surviving languages, and is spoken by more than 80 million people around the world. Tamil poetry and literature has also existed for more than 2,000 years and comprises large volumes of works. But it continues to be neglected in many universities, says Dr. Vijay Janakiraman, president of Tamil Chair Inc., which is the non-profit set up to create and support chairs in Tamil studies at top universities around the world. “Among all the classical languages, Tamil has been largely ignored at the university level outside of Asia,” says Dr. Janakiraman, a cardiologist from Pennsylvania who initiated the Harvard Tamil Chair project.

“Our goal is to change all that. We want to have a chair at all of the top universities around the world because without an endowment fund to support a chair, it’s difficult for consistent research to take place.”

It’s also fitting that U of T Scarborough will be the Canadian location for a chair in Tamil studies. In addition to recent gifts made to the campus for Tamil studies, the Greater Toronto Area is home to the largest Tamil community outside of Asia, and Scarborough is also the location of the largest annual Tamil street festival held outside of the Indian subcontinent, which is hosted by the Canadian Tamil Congress.

“In many aspects of life, Tamils have been successful in Canada, whether in medicine, academics, business or various levels of government,” says Ilangko. “It’s a source of pride for our community to be able to give back in this way.”

The timing of the pledge is ideal given the momentum created by the recent establishment of the Harvard Tamil Chair and the declaration of Tamil Heritage Month in Canada. But he adds there are also important lessons in Tamil literature that resonate today.

“More than 2,000 years ago, the Tamil poet Kaniyan Pungundranar said, ‘To us all towns are one, all persons our kin,’” says Ilangko.

“There is an abundance of ethical wisdom to be found in these ancient Tamil texts waiting to be explored.”