Taking on Islamophobia in higher education 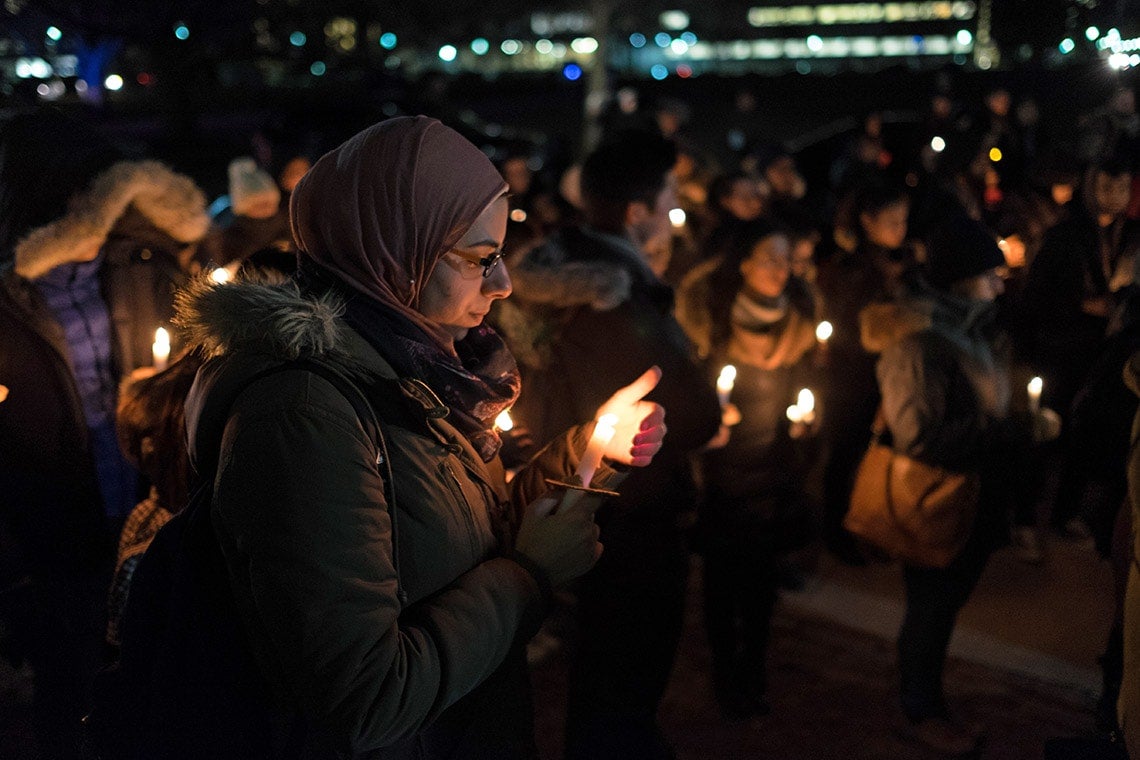 When Dalia Hashim was in her second year of university, she had an encounter she can’t forget.
Walking down St. George Street, listening to music and carrying her textbooks, she crossed paths with a middle-aged couple. “Make way for the curtain,” one of them said, referring to Hashim’s hijab.
The remark hit her like a sucker punch: She was so confused she didn’t know how to process what had happened. It was a hurtful reminder that Islamophobia persists, even at the heart of a university campus, in a city that prides itself on multiculturalism.
Hashim, a former president of the University of Toronto Muslim Students’ Association, says she continued to experience Islamophobia – often in insidious ways, such as seeing stereotypes of her faith in class.
She returned to campus this week, a few months after graduating with a master’s degree in public policy, to moderate a discussion on dismantling Islamophobia in higher education. The event at Hart House was organized by the Anti-Racism and Cultural Diversity Office (ARCDO) with Hart House and the Multi-Faith Centre – an example of how the university is working with student groups to address anti-Muslim sentiment.
Across Canada, many Muslims face hostility. The latest Statistics Canada data, from 2015, shows police-reported hate crimes against Muslims increased by 60 per cent.
U of T is not immune to the swell of anti-Muslim sentiment happening globally, says Sandra Carnegie-Douglas, the university's anti-racism and cultural diversity officer.
The event grew out of ARCDO's conversations with students in its dialogue programs about race and faith. The dialogues are peer-led and held a few times a semester at each of U of T’s three campuses. By having these discussions, ARCDO hopes to shed light on the many ways that student, staff and faculty experience Islamophobia.
ARCDO is one of the university’s equity offices and has a tri-campus mandate. Members of the community can contact the office to report concerns and submit a complaint if they experience harassment or discrimination on campus based on their religion, race, ancestry, place of origin or citizenship.
“Islamophobia impacts the university as a whole,” says Carnegie-Douglas. “If members of our communities are feeling marginalized and excluded, then they’re not able to contribute and reach their full potential.” 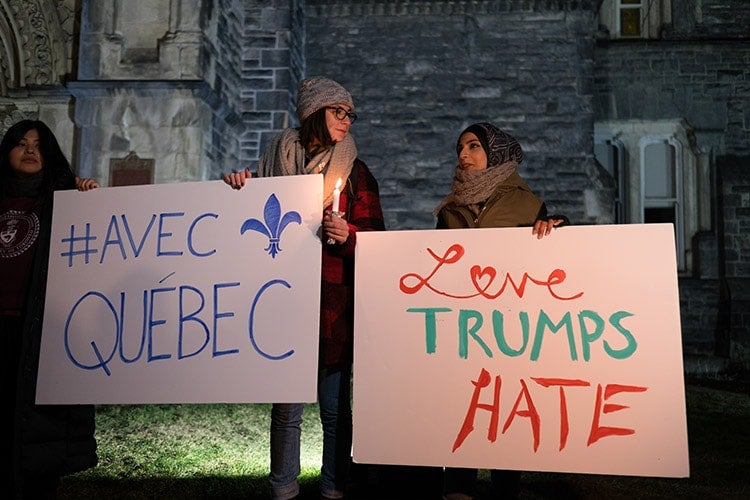 Mourners at the U of T vigil for the victims of a shooting at a Quebec City mosque in January (photo by Geoffrey Vendeville)
Some students have said they faced subtler forms of discrimination, such as being called on in class as the voice of all Muslims, especially in response to Islamophobic comments, says Carnegie-Douglas. Others have experienced more overt acts of bigotry and discrimination.
“The ARCDO's intention is to continue the conversations with students, as we incorporate the voices and experiences of faculty and staff,” with the goal of fostering a more equitable and inclusive university community, Carnegie-Douglas added.
When a community member experiences an Islamophobic incident, Sameena Eidoo, assistant director of education and programs, at the Multi-Faith Centre, is there to listen and provide support. Students, staff and faculty can make an appointment or drop in during regular business hours.
“We strongly encourage reporting Islamophobic incidents that occur on campus,” Eidoo says.
“Muslims and those perceived to be Muslim are vulnerable,” she continued, adding that Islamophobia interlocks with other forms of oppression, including racism, sexism, homophobia and transphobia.
“It has wide-reaching implications for all of us,” she says.
Incidents can also be reported to the Multi-Faith Centre. The National Council of Canadian Muslims, a civil liberties and advocacy organization, keeps a record of hate crimes.
After six Muslim men died and 19 others were wounded in a shooting at a Quebec City mosque in January, the Muslims Students’ Association – the largest student club according to its website – hosted a healing circle at the Multi-Faith Centre.
It was at this painful time that Hashim, then-president of the Muslim Students’ Association, had an experience that stands in sharp contrast to that ugly encounter on St. George Street years earlier. 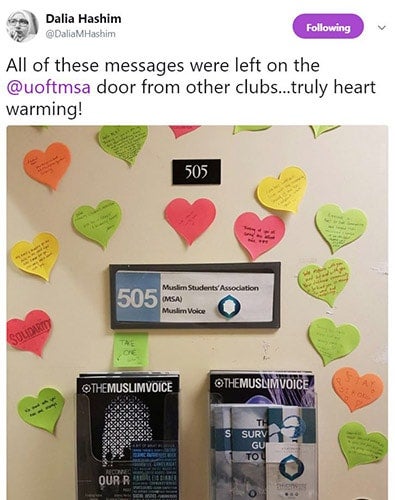 More than a dozen of heart-shaped sticky notes were left on the association’s door with messages like “Stay strong” and “We mourn with you.” Words of support were also left in prayer spaces at Emmanuel College and the Multi-Faith Centre.
“It was very heartwarming at a time when a lot of us were trying to wrap our heads around something that was very senseless and hard to explain,” Hashim recalls.
She hopes the vigil and other events organized after the tragedy made at least one thing clear: “It’s okay if you arrive at U of T not knowing much about Islam or Muslims, but it’s inexcusable to spend four years here and have the same stereotypes.”
Geoffrey Vendeville