Taking the helm: Ulrich Krull installed as U of T Mississauga's ninth principal 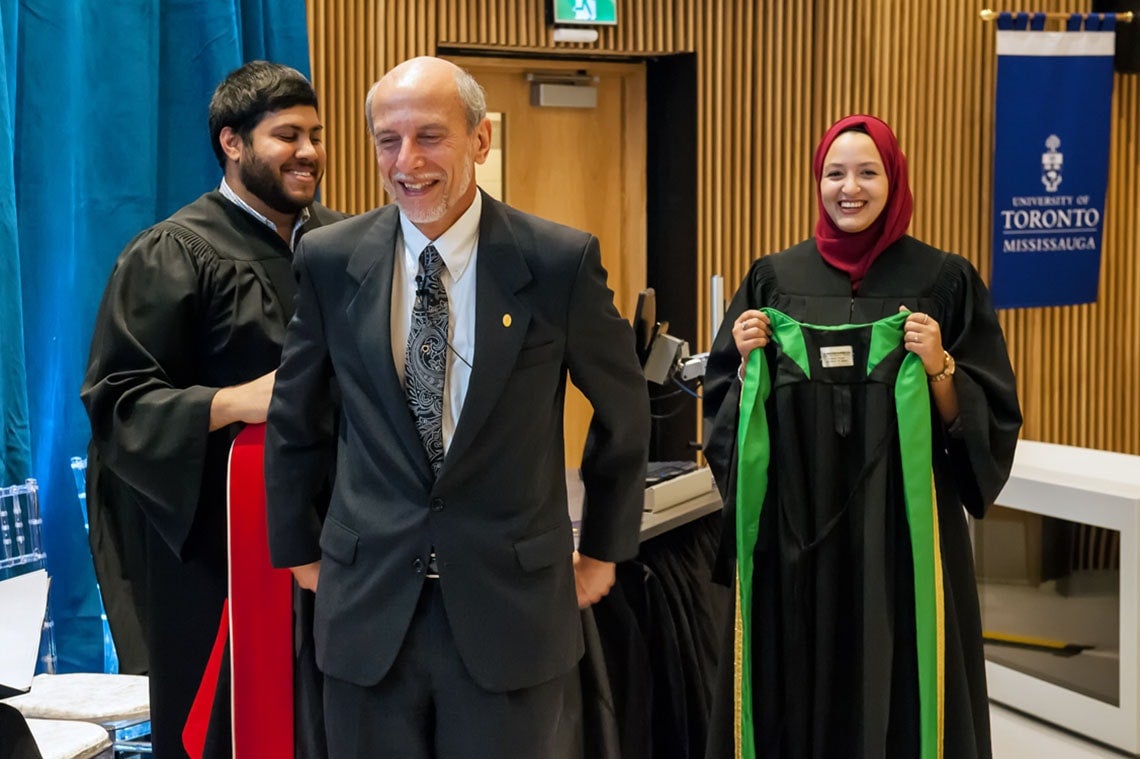 With pomp, ceremony and a colourful exchange of robes, Professor Ulrich Krull was officially installed Thursday as the ninth principal of University of Toronto Mississauga, in a ceremony filled with warmth and laughter.

“I had not imagined myself standing here,” said Krull, thanking U of T President Meric Gertler for making it possible for him to serve as principal while still teaching, performing research and serving the community.

And while he did not perform his signature fingertip pushups while sporting his principal’s robes, several members of the platform party alluded to Krull’s energy, athletic prowess and skill at judo. Krull thanked former Ontario premier William G. Davis, former Mississauga mayor Hazel McCallion, philanthropist Terrence Donnelly, and gave particular thanks to his family, including his mother, Anneliese, and partner, Carol.

A large procession of academics and VIPs, including Mississauga Mayor Bonnie Crombie, were led into the hall by a piper: Professor Emeritus Scott Munro, followed by two gonfaloniers (Andrea Carter and Dale Mullings) and Mark Overton, who carried the gleaming, golden U of T mace. After a traditional Indigenous acknowledgment of the land upon which University of Toronto Mississauga operates by Aboriginal Elder Cat Criger, U of T Provost Cheryl Regehr explained the purpose of an installation and introduced each speaker, beginning with President Gertler. Wearing his ornate blue and silver presidential robe, President Gertler praised Krull’s leadership and commitment to U of T Mississauga, then administered the oath of office and officially invested him as principal, greeted by applause from the audience.

Once the applause subsided, Krull settled back to listen to several speakers congratulate him on his installation, beginning with Crombie, Mississauga's mayor. Wearing her red academic regalia and her municipal chain of office, Crombie quoted Albert Einstein when describing Krull's approach to teaching. “It is the supreme art of the teacher to awaken joy in creative expression and knowledge,” she quoted, and passed on best wishes from city council and staff. “All of Mississauga celebrates with you.”

Associate Professor Andrea Sass-Kortsak brought greetings on behalf of Governing Council, while Professor Amrita Daniere, U of T Mississauga’s vice-principal and dean, gave greetings and congratulations from faculty and staff. Chris Thompson, the president of U of T Mississauga’s Alumni Association, congratulated the campus’s new principal on behalf of its 55,000 alumni.

“This is a very exciting time for UTM and its proud and passionate alumni cohort,” said Thompson. “Professor Krull, I would like to take this opportunity to wish you all the best as you forge a new path for UTM and build on 50 years of success.”

“I am thrilled to welcome such an inspiring leader to this campus,” said Anjeola Salami, representing the student body. “I am sure all undergraduate and graduate students share my feeling that a sense of exciting change and limitless opportunity is in the air.”

U of T Chancellor Michael Wilson closed the ceremony, congratulating Krull for his passion, leadership and vision.

“Clearly, the University of Toronto Mississauga is in very good hands,” said Wilson. “We are delighted to have Professor Ulli Krull as our principal here."