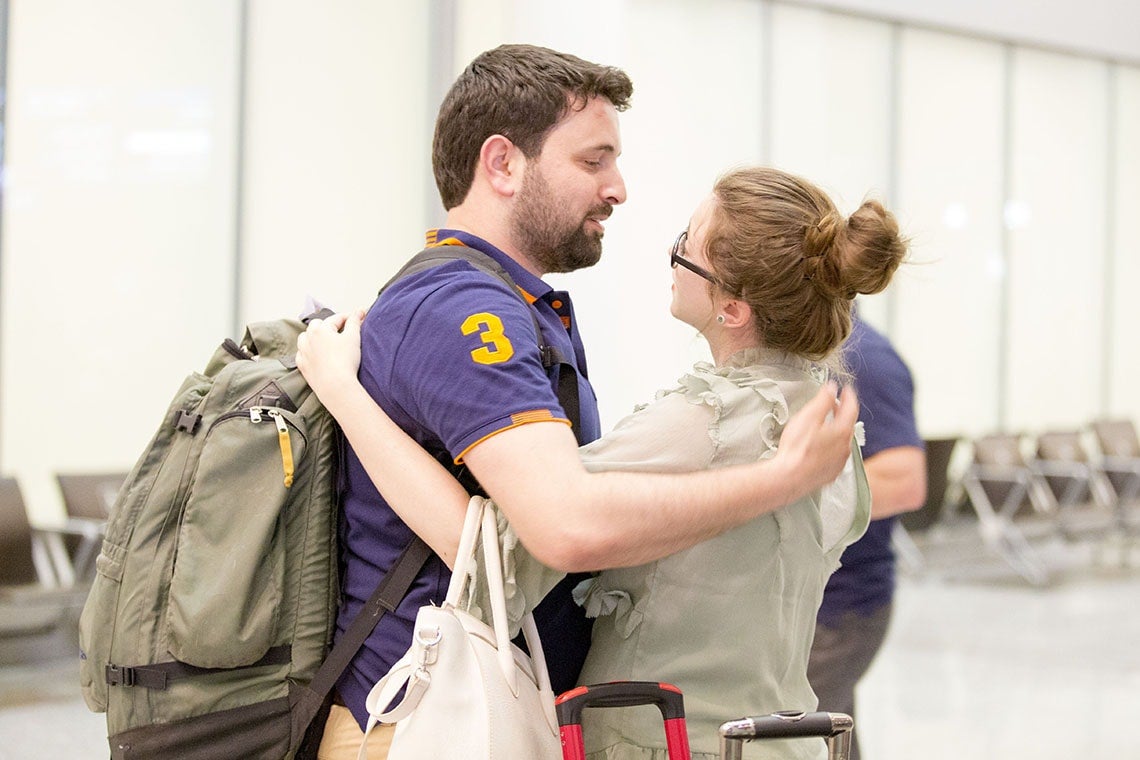 Syrian doctor Khaled Almilaji greets his wife at Pearson Airport following U.S. President Donald Trump's travel ban for Muslims. He was refused re-entry to the U.S. and offered a scholarship to U of T (photo by Carlos Osorio/Toronto Star/Getty Images)

The Brown University graduate student found himself stranded overseas by the Trump administration’s travel ban. With his wife pregnant and unable to return to the U.S., the Syrian physician was offered a scholarship to U of T for the executive master of health informatics program.

The couple were reunited in Toronto in June. As a recognized humanitarian who has worked closely with the World Health Organization and United Nations to co-ordinate the delivery of vaccines to 1.4 million Syrian children and provide health care in Syria during the six-year-long civil war, Dr. Almilaji's tuition is being covered by the university. Dr. Michael Dan and Dr. Amira Dan and other private donors have come forward to support Dr. Almilaji while he is in Toronto.

Dr. Almilaji, who was also featured on CBC's Metro Morning, will be studying at the Institute of Health Policy, Management and Evaluation at the Dalla Lana School of Public Health.

“I know the travel ban is all about politics, not security,” Dr. Almilaji says in the article. “It’s a game. But the people on Trump’s list have been suffering for many years, and the ban only increases that suffering.”

He says he and his wife are looking forward to raising their daughter in Canada. Their baby is due in August.

“We feel safe here,” he says. “In Toronto, the notion that everyone should be accepted and respected, regardless of their nationality or background, is something that’s practised on a daily basis. I saw it on my first day. In the airport, I looked around and saw people with different faces, different skin tones, different ethnicities, but the same spirit. To see a stable, established country like Canada using diversity to make itself richer and stronger has inspired me. This was what we were fighting for in Syria in 2011. That’s what I want for the future of my country.”