Sustainable concrete: U of T alumni recognized for innovation to use waste of one industry to benefit another 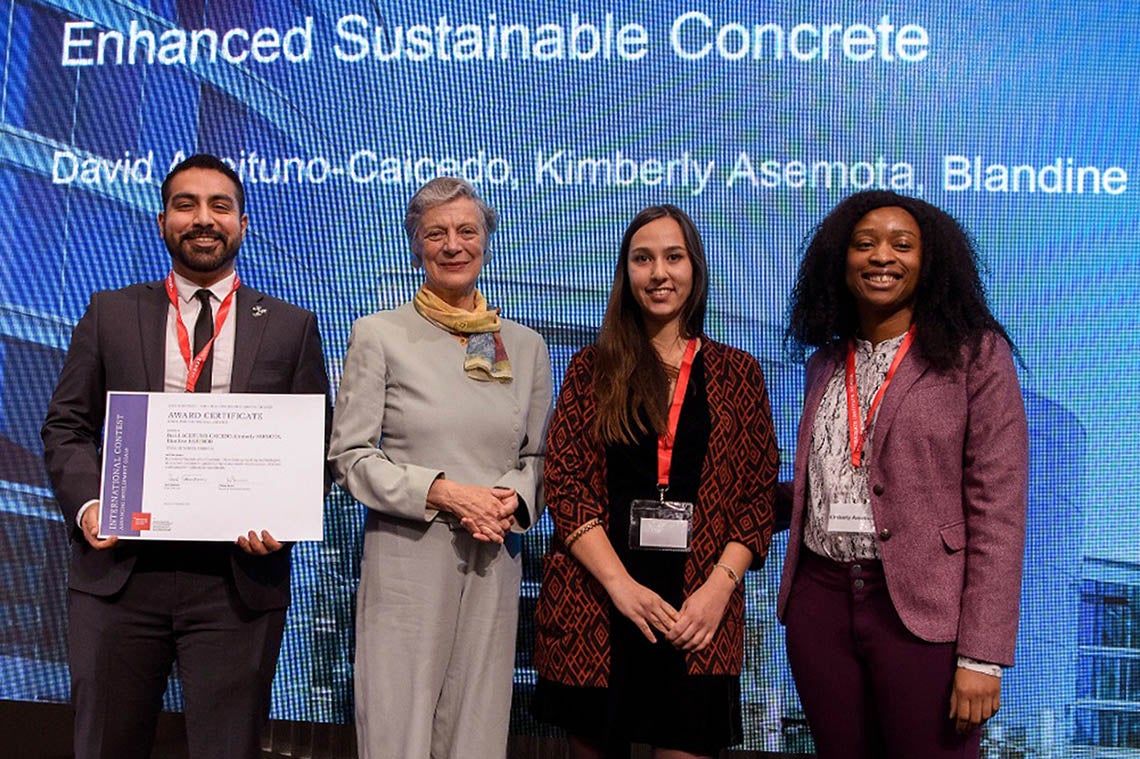 A group of alumni from the University of Toronto has been internationally recognized for its proposal to create more environmentally friendly concrete that would help nations fight climate change, build sustainably and save valuable drinking water in the process.

Concrete is an important material for developing nations, but it has downsides, including using clean water as one of its three ingredients.

“Climate change isn’t just a scientific problem, it’s a problem in almost every discipline that exists – it affects everything directly or indirectly,” says David Aceituno-Caicedo, a recent graduate of U of T Scarborough's Master of Environmental Science program.

While finishing the program, Aceituno-Caicedo and fellow alumna Kimberly Asemota were inspired by two class topics.

In one week, they learned about bioconcrete, an emerging technology for “self-healing” concrete. It’s a mixture that becomes limestone when bacteria and nutrients are exposed to water. In another week, they were introduced to the sustainable use of brine – the highly concentrated salt mixture left over from making saltwater drinkable.

“We thought, ‘Why not just take the brine that has to be managed from the water desalination process and use that to mix bioconcrete?’” says Aceituno-Caicedo. “It’s mixing the two industries together, bridging this sustainability gap and taking the waste of one and using it to benefit the other.”

Through Maria Dittrich, an associate professor in the department of physical and environmental sciences, the students were connected to Blandine Barthod, a Master of Environmental Science student doing a one-year exchange program from the University of Geneva.

Dittrich, who supervised Barthod's master thesis, felt their fields of expertise would complement each other. Aceituno-Caicedo’s background is in microbiology, while Asemota’s is in chemistry and Barthod’s is in international development.

Dittrich also encouraged them to enter the Geneva Challenge, an annual competition for master students to showcase ideas to solve an international development issue. Their proposal was one of the top 15 global semi-finalists. They were awarded the UN Sustainable Development Solutions Network (SDSN) Youth Special Prize.

The trio were invited to Geneva for the award ceremony and to network with other global leaders. Their work will also be published on the Youth Solutions Report platform.

“It was a good learning opportunity with like-minded individuals who have similar goals,” says Asemota.

Their proposal used Cape Town, South Africa as a case study. The city is suffering from drought and is expecting “Day Zero” this year, when its taps will run dry and people have to use communal water stations.

“We are dealing with issues of water scarcity and we are also tackling the issues of sustainable development for infrastructure,” says Asemota. “Our major goal was having more water available to the public in areas that are water-stressed.”

For the proposal, Asemota focused on the possibility of using the new concrete in Cape Town, while Barthod concentrated on broader international development concerns. Aceituno-Caicedo looked at the feasibility of using brine to mix bioconcrete.

Their next steps: Find the best ways to mix the concrete and start working on a pilot project.

“It’s like a domino effect,” says Aceituno-Caicedo. “If you give people the basic necessities for life, like water, that leaves room for them to start developing in other areas."