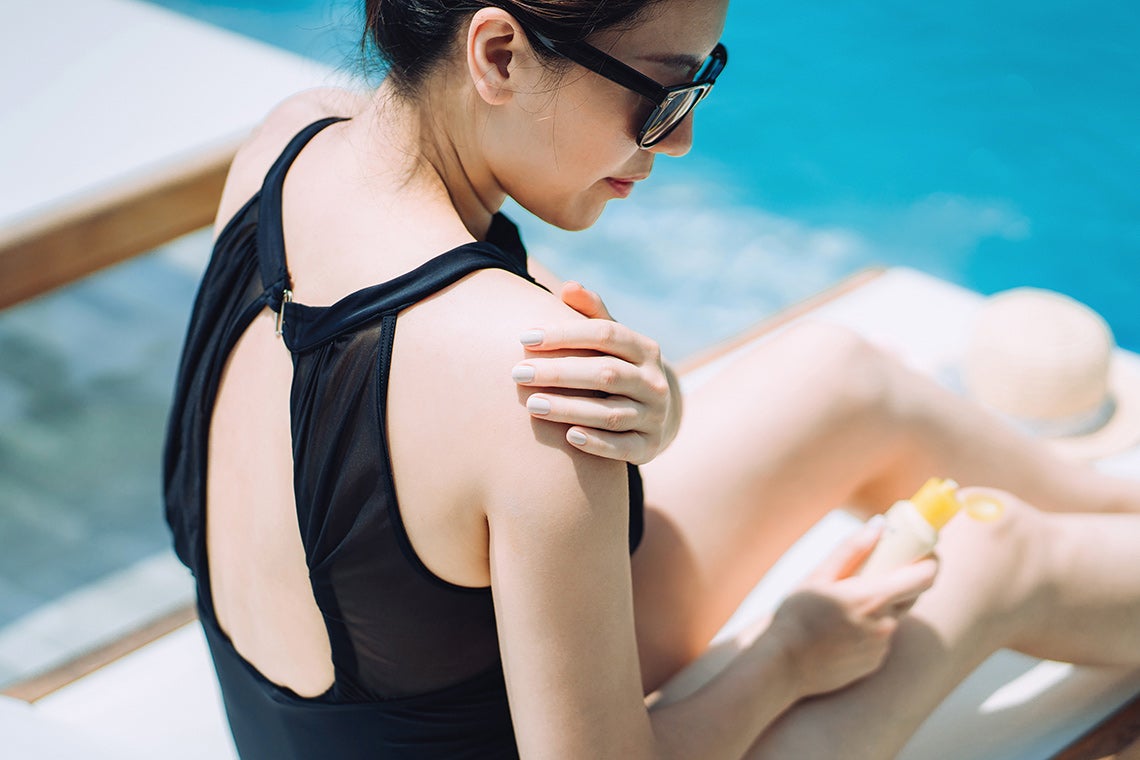 (photo by d3sign via Getty Images)

Dermatologist Cheryl Rosen is so serious about sun protection that she sometimes carries her own shade – a parasol.

Rosen is a professor in the department of medicine in the University of Toronto’s Temerty Faculty of Medicine, and head of the dermatology division at Toronto Western Hospital, Toronto General Hospital and Princess Margaret Hospital. Her research interests include public education for skin cancer prevention.

A spokesperson for skin cancer prevention and part of a group whose advocacy helped introduce a provincial law prohibiting people 18 and under from using tanning beds, Rosen says practising good sun safety is the best way to avoid skin cancers that are caused by sun exposure.

Writer Blake Eligh recently asked Rosen to share her sun safety tips as Canadians take to the outdoors during another pandemic summer, including common sunscreen mistakes and her trick to eliminate the pesky white cast left by mineral sunscreens.

What are the basic steps for staying safe in the sun?

Everyone spends time outside in the summer, but particularly now because of the pandemic and the need for social distancing. As dermatologists, we say go outside and have a wonderful time, but be aware of the sun. Wear sunscreen, seek shade and cover up.

Find a broad spectrum sunscreen with an SPF (sun protection factor) of 50 or higher to protect against both ultraviolet B and ultraviolet A (UVB and UVA) radiation. Put sunscreen right beside your toothpaste to make it an automatic part of your morning routine. Put it on every day in the warmer weather — you never know when you might have the chance to have lunch on an outdoor patio.

There are clothes that offer UV protection, with a UPF label, but you don’t really need them if you choose clothes with tightly woven fabrics. Don’t forget to wear a hat and sunglasses.

Plan your outdoor activities wisely and, if you can, schedule activities like tennis for earlier or later in the day.

Seek shade wherever possible. Look for natural shade from trees and outdoor patios with umbrellas. You may choose to use a parasol or umbrella – carrying your own shade around with you is a good idea.

What is the role of sunscreen in skin protection?

Years ago, we didn’t know about the damage the sun could cause.

There are so many sunscreens on the market. How do we choose the right one?

The best sunscreen is one that you don’t mind putting on, so it’s important to find a product that works for you.

Find a sunscreen with an SPF of 50 or 60. The SPF tells you about protection against UVB radiation.

Look for the words “broad spectrum” on the label. That indicates protection against both UVA radiation and UVB radiation, which play a role in developing skin cancer and in photoaging.

Also look for the symbol of recognition by the CDA, or the letters “UVA” within a circle, which indicates the sunscreen has met the European Union standards for UVA protection.

Are there new developments in sunscreen formulas?

Iron oxide is the next big thing in sunscreen. There’s recent research that shows visible light – daylight, not just ultraviolet radiation – can increase pigmentation in the skin. Iron oxide can help protect our skin from this visible light. Some sunscreens include it as an inactive ingredient, but it hasn’t yet been approved by Health Canada as a sunscreen active ingredient.

What are some common mistakes that people make with sunscreens?

We know people put on way less sunscreen than is actually used in testing, so that’s a great reason to use a sunscreen with a high SPF value. If you’re putting on half as much as the test quantity, you’re actually getting half the SPF.

One common mistake is missing parts of the body during application. People do a poor job of putting it on the first time. There are examples of tests where fluorescent dye is added to the sunscreen. A special light reveals whole areas that people missed in application.

People forget to put sunscreen on their ears or the back of their neck.

If you’re using a spray, you have to rub it in, or you might end up with lines of protected and unprotected skin.

Forgetting to reapply is another issue. The FDA and Health Canada both advise reapplying sunscreen every two hours. Other research shows that the best time to reapply is 20 minutes after the first time to make up for the mistakes and missed spots during the first application.

When should we take extra precautions?

Medical conditions are one reason to take extra precautions. Solid organ transplant patients have a markedly higher rate of skin cancer because they take medication that suppresses the immune system. They should be careful in the sun, as should people with systemic lupus erythematosus, or those who are taking certain drugs that cause photosensitivity to UVA.

People with melasma develop darker patches on the face. These people need to use sunscreen during the day to prevent further darkening of the melasma, and may use a medicated cream at night which can help fade the patches. If you’ve had a facial procedure that’s healing, such as laser therapy, you also should avoid the sun or you’ll be left with darker areas.

How does the sun affect people with darker skin?

For people with skin of colour, the risk of skin cancer caused by the sun is very low because melanin, the pigment that gives skin its colour, is a very good source of protection. What can be an issue is increased pigmentation from the sun, such as patches of darker colour. Sun protection can help with that.

Mineral sunscreens can leave a white cast. One trick I’ve learned is to add a little bit of foundation to your sunscreen and really blend it in, so it’s closer to your skin tone.

Should we be worried about chemicals in sunscreen formulations?

Some studies have reported concerns about particular sunscreen ingredients, such as benzophenone. There are reports of benzophenone being an endocrine disruptor, but another study found that reproductive hormone levels were normal in humans using sunscreen on a regular basis.

Sunscreens have been used for years and have not shown any signal that they cause a problem. As dermatologists, we have to keep looking at the studies reported in the literature.

What tips can you share on coping with a sunburn?

Typically, people don’t come to see me about sunburns. The pain and redness will fade in a few days. There may be some skin damage, such as DNA damage in the skin cells. A cool compress or a moisturizer that’s been in the fridge can be soothing. A non-steroidal anti-inflammatory medication might help ease the pain.

Prescription retinoids, such as tretinoin, may reverse some sun damage. It can be applied as a cream to an area that might eventually show fine lines and wrinkles, or to try to reverse these changes once they have appeared.