Matti Siemiatycki: “We will have enough data to continue to engage with students, to push the conversation” about their transit needs 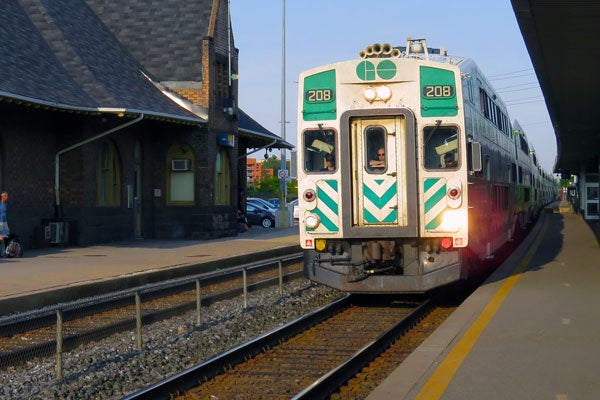 More than 7,000 University of Toronto students have filled out an unprecedented survey about their concerns while travelling to and from school.

The survey was launched on Sept. 30 at Toronto City Hall, with the four universities in Toronto collaborating on the initiative. More than 13,000 post-secondary students responded, including more than 7,000 from U of T.

Matti Siemiatycki, an associate professor of geography and expert on transit and infrastructure, helped design the survey and will be part of a U of T group analyzing the results in January. The survey closes on Dec. 8.

Siemiatycki said in an interview with U of T News the response so far is “good intermediate news. This suggests how interested students are in this issue. We are highly encouraged that they would take the time to do this.”

When the results are analyzed, “we will have enough data to continue to engage with students, to push the conversation” about their transit needs. “We will get a really good picture of what their travel habits are across the (GTA) region.”

Zainab Abbasi filled out the survey. The fourth-year student majoring in urban studies and architectural design commutes to the downtown Toronto campus from Mississauga.

“I was really surprised that so many students filled it out. I thought it would be just students in urban studies who would be interested,” Abbasi said in an interview.

One section of the survey asked the students to essentially keep a diary of their day-to-day travels for one week. “It was very comprehensive and detailed,” Abbasi said.

She takes the GO-Train from the Streetsville Station to get to U of T. “It is not the cheapest way but it is the most dependable. I know some students from Mississauga who can’t afford it and take a bus to the Islington subway station, but it really takes much longer” to get to school.

Bushra Nassab, president of the Association of Political Science Students at U of T, also completed the survey. She too commutes to the downtown Toronto campus from Mississauga.

“My biggest issue regarding travel times is traveling during rush hour. In order to avoid making my one hour commute a one and a half hour one, usually I find myself avoiding travelling during such times. However, my biggest issue with the transportation system in the GTA is not so much the travel time, but how expensive it is.”

Nassab said she studied in Germany and “while I was there, I was given a significant discount on transportation services by virtue of me being a student. I feel that the GTA transportation systems keep raising their fares and are not accommodating towards students. I feel like we can learn a lot from Germany.”

In Germany she purchased a “monthly regional pass (the region being almost the size of the GTA) with unlimited travel on all buses and trains in the region for only 56 Euros, which is approximately $81 Canadian.

“In Canada, I use a Presto Card and I spend approximately $54 per week just commuting from home to U of T and vice versa. I feel that the provincial government should really do much more to help students in this respect and save them some money,” she said.

The survey was created by StudentMoveTO, a partnership between U of T, York University, Ryerson University and OCAD U. The launch at City Hall was attended by President Meric Gertler and representatives of the other universities and transit officials in the GTA.

(Image below: President Gertler at the launch/photo by Johnny Guatto) 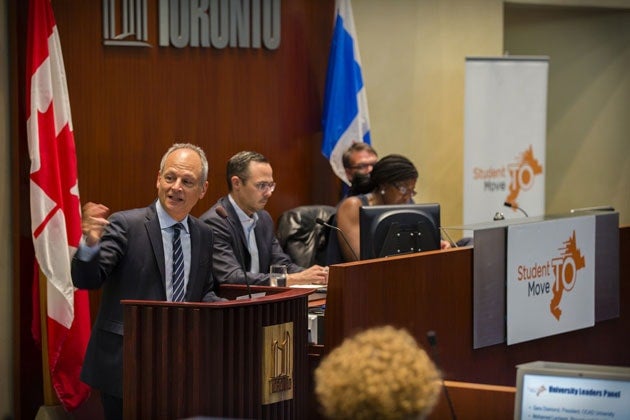 (See the original of the photo used above at Flickr)