Survey results show students at U of T, OCAD, York and Ryerson all affected by long commutes 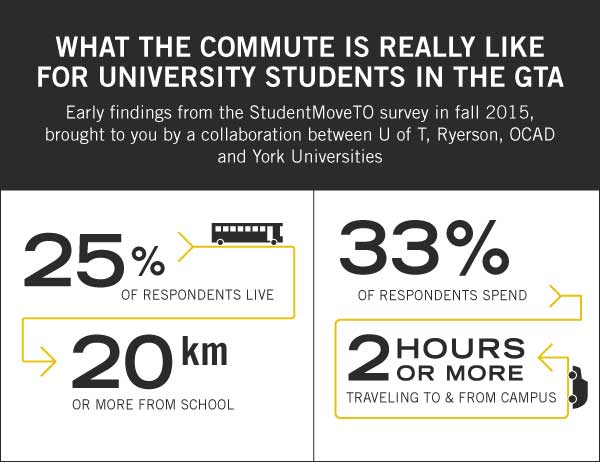 “I think this speaks to equity and access,” says Matti Siemiatycki (graphics by Geoff Agnew)

One-third of university students in the Greater Toronto Area spend two hours or more travelling to and from campus on school days and one-quarter live at least 20 kilometres away from their destination.

These and other revealing results are contained in StudentMoveTO, a report based on 15,226 responses gathered last fall by the University of Toronto, OCAD University, Ryerson University and York University.

“As commutes get longer and students spend more time in transit, that travel has more impact on their lives,” said Matti Siemiatycki, associate professor of geography and planning at U of T and one of the lead researchers of the collaborative survey, thought to be the largest of its type involving multiple universities.

“When they look at their studies, part of their decision-making around which courses to take depends on how they’re scheduled. This is a really important finding.” The survey asked students to document travel for all reasons. Transportation to and from school accounts for 45.6 percent of student travel time spent in transit. Fifty-four per cent of respondents who were asked about employment reported having part-time jobs.

“That’s an eye-opening number,” Siemiatycki said, noting that 27 per cent of these working students log more than 20 hours per week. “Sometimes those jobs are on campus, but often not.

“All this paints a picture of a student body that is spending a lot of time on travel. That affects their university experience and the time they have available for extracurricular activities, which are important.”

Numbers vary between universities. U of T students on the St. George campus reported a one-way average travel time of 36 minutes – not markedly lower than the approximately 38 minutes spent by students at U of T Scarborough and U of T Mississauga.

Average one-way travel times are higher to OCAD and the Glendon and Keele campuses of York. Students at Ryerson spend an average of more than 46 minutes on travel. Ryerson has made provisions for overnight stays. The study also compiled information about housing – “the other side of the transportation coin,” as Siemiatycki puts it.

Cost is the most important determinant of where students live. Almost 21 per cent of respondents said the decision was out of their control – meaning, in most cases, that they live with their parents. About 16 per cent said that the ability to walk or cycle to campus was the decisive factor.

Although there are predictable areas of concentrated lodging near campus, the survey made clear that students are widely distributed in the GTA.

“Our universities are universities within a city, rather than ‘little cities’ within a broader region,” Siemiatycki said. “Students live right across the region.”

For some students distance and daunting commutes result in a decision not to attend all classes.

“I think this speaks to equity and access,” Siemiatycki said. “There are various barriers to access: financial, life stage, family responsibility. Transportation is potentially one of these barriers.”

The research team sent the survey by email to approximately 185,000 students. Not all email addresses were active. The response rate of 8.3 per cent – considered high for this demographic – yielded more than 15,000 replies.

Most respondents, 63 per cent, reported the use of pubic transit to get to school. Twenty-six percent walk or cycle. Driving, solo and shared, accounts for 10 per cent, although this figure, as might be expected, was higher for suburban than central campuses.

Despite the impressive quantities of data gathered, some questions remain open to speculation. Are students with books and smartphones able to use transit time profitably?

“It may not be entirely wasted time, but it is definitely less discretionary time,” he said. “And we know from our students that they are facing a lot of pressure in terms of getting their assignments done and staying on top of things.” Juliana Pandurevic, a second-year double major in political science and French at University College on the downtown Toronto campus, combines transit modes, driving from her family home in Mississauga to the Kipling subway station in Etobicoke. The return trip downtown, four days a week, takes more than three hours. Pandurevic also works 25 hours a week as a receptionist.

“In high school I didn’t know how long the commute would be and I liked the idea of being downtown,” Pandurevic said.

Her commuting time “absolutely” has an influence on her choice of classes. Pandurevic said she has decided against a summer course on ethics running from 6 to 9 p.m. because of its lateness.

While StudentMoveTO is not a policy document, Siemiatycki expects it to stimulate debate and inspire universities and transportation agencies to look more closely at student transit issues.

Other subjects for discussion are campus design that encourages commuting and the deployment of online courses.

“We’re looking at this though a transportation lens,” Siemiatycki said, “but it continues the conversations we are already having about new ways of learning, new ways of delivering courses, new ways of engaging students.”

U of T President Meric Gertler, like Siemiatycki a professor of geography and planning, welcomes StudentMoveTO as a tool to use in broader transportation questions.

"The initial goal was to seek ways to help inform public policy and ultimately to improve the commuting experience for our students,” he writes in U of T Magazine. “But we believe the data will help improve the quality of life for everyone in the Toronto region."