Staging intimacy with consent: U of T Mississauga brings in special director 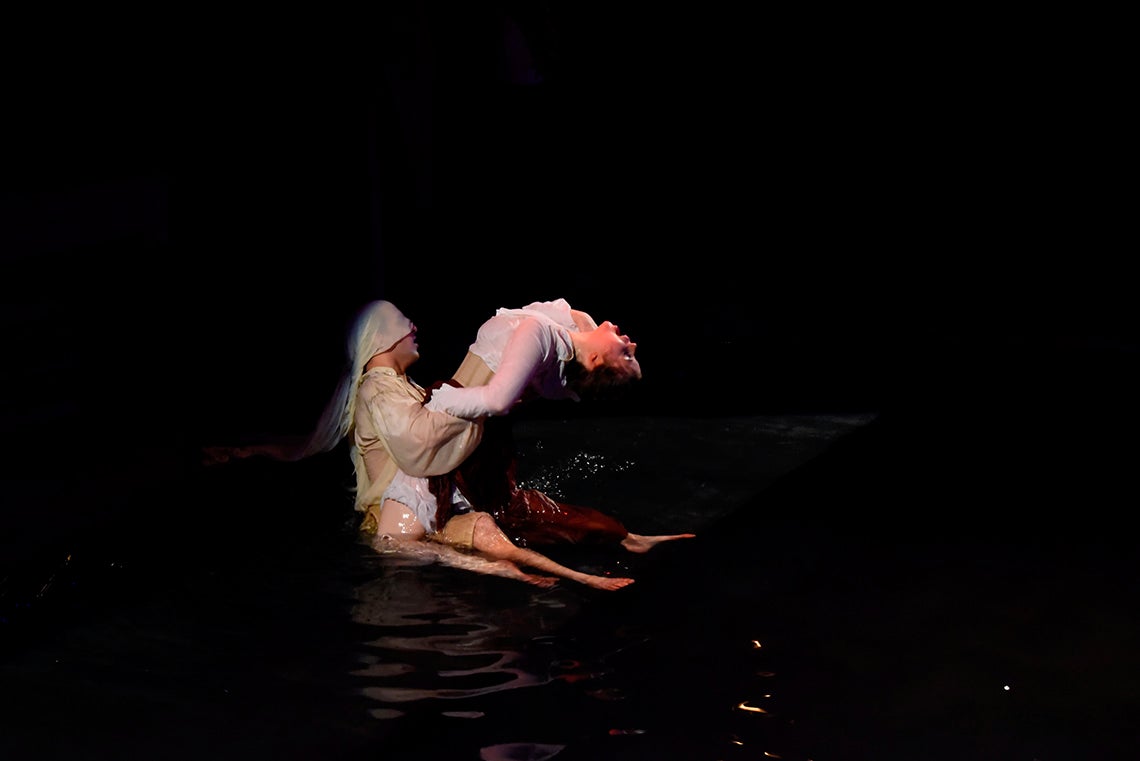 Issues of sexual harassment and male-female power dynamics are dominating the cultural conversation. How do these matters come into play in the world of theatre, where actors must sometimes navigate intimate scenes?

The University of Toronto Mississauga and Sheridan College are working to ensure students in its theatre and drama studies program can practise their craft in a safe and comfortable way. For its season-opening production of Metamorphoses, U of T Mississauga's Theatre Erindale hired an intimacy director to provide guidance on performing in physically intimate scenes in ways that involve respect for personal boundaries. The theatre produced a video on the experience of staging intimacy for the play.

“With some material in this play, we had to take a lot of care in how we approach it,” says David Matheson, co-ordinator of the theatre and drama studies program and director of Metamorphoses. “It was very important that students learn techniques to deal with the material in a respectful manner.”

Last year, Matheson hired intimacy director Siobhan Richardson, co-founder of the not-for-profit organization Intimacy Directors International and of the resource Canadian Intimacy for Stage and Screen. At the time, she assisted with a stage production that involved a sexual assault scene – an experience believed to be the first time a post-secondary school in Canada incorporated this kind of role into a theatre production.

When Richardson joined this year’s production of Metamorphoses, she first led a workshop with the entire company on the essentials of approaching intimate scenes in a sensitive way. She addressed the kind of language to use when discussing such material – they aren’t make-out scenes, but intimacy scenes.

Richardson also introduced the concept of tagging in and out, where actors can give each other high fives as they enter and exit scenes. The purpose is to allow actors to clearly mark the start and end of intimate scenes and analyze them. This approach was useful to actor Gillian Clare, who is involved in a sexually transgressive scene in the play.

“Because my scene is so intense, it’s important to leave it behind,” Clare says. “It allows me to step out of a scene to discuss it and talk about what worked and what didn’t. It separates me the actor from me the person. It’s a safeguard that makes rehearsal more enjoyable.”

Richardson also guided the choreography of the intimate scenes by providing opportunities for the actors to indicate which types of movements and touches were acceptable to them. The process involved teaching the actors to acknowledge and clearly communicate their personal boundaries, practise saying no and understand consent.

“She would say to the actors, ‘Do you feel comfortable touching or being touched here, or there? Let’s be specific about where the hands go, where the feet go, the tempo, the physical way the bodies are connecting, the duration,’” Matheson says. “They learned to have an open conversation with each other about the choreography.”

Matheson plans to include intimacy training in theatre training on a more regular basis. He says creating a psychologically safe rehearsal space is not only an end in itself, but it also helps improve the quality of intimacy scenes.

“Because they know the rules of what they can and can’t do in an intimacy scene, the students can allow themselves to be vulnerable and drop their internalized barriers,” Matheson says. “They don’t have to be inhibited and can fully commit. The rules set them free and let them be more creative.”