Solar eclipse 2017 in Toronto: U of T experts on what you need to know 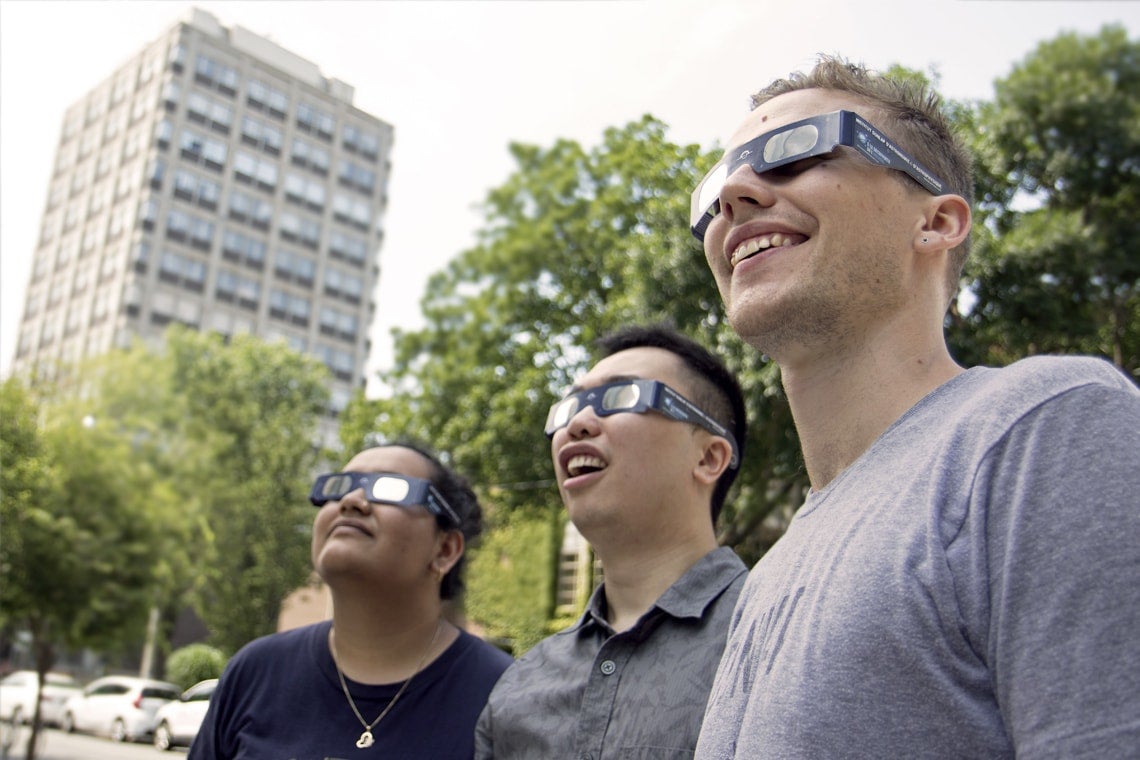 If you haven't heard already, on Aug. 21 people across North America will be able to witness an incredible cosmic phenomenon – the solar eclipse.

While this total eclipse is best seen in the United States, Torontonians are in luck – you’ll be able to see a significant partial eclipse right here in the city.

Head to the CNE where a team of 20 students and faculty from U of T’s Dunlap Institute for Astronomy & Astrophysics in the Faculty of Arts & Science will be on hand with telescopes and free eclipse glasses.

From where to see it to how to watch it safely, here’s what you need to know:

What is a solar eclipse?

An eclipse takes place when one astronomical object passes in front of another one, says Michael Reid, an associate professor, teaching stream at the Dunlap Institute.

He says that during a solar eclipse, “the moon is passing in front of the sun, and through a totally freak cosmic coincidence, the moon and the sun – when viewed from the earth – are almost exactly the same size.”

This total eclipse – when the moon perfectly covers the disc of the sun – can only be seen along what’s called the path of totality.

People along the path will be able to view the outer layer of the sun – the corona – peeking out from behind the moon.

What can we see in Toronto?

Toronto is not on the path of totality this year, but we will still be able to see an impressive partial eclipse with the moon covering about 70 per cent of the sun, says Reid. 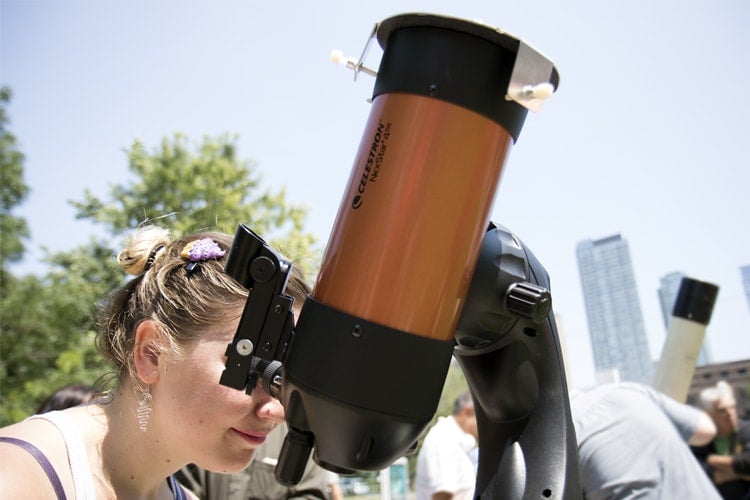 You can look directly at the sun using a telescope with a solar filter at the CNE on Aug. 21 (Photo by Romi Levine)

Where can I view the eclipse?

Stop by the CNE to chat with U of T’s astronomy experts, look through a telescope or pick up a pair of eclipse glasses. They will also be streaming NASA’s coverage of the total eclipse.

“We'll have some eclipse demos to show people exactly what's going on – where the earth and the sun are, why this is happening, and why it doesn't happen more often,” says Reid.

Dunlap regularly hosts public events for amateur astronomers, including last month's Star Party as well as viewing events for the lunar eclipse and the transit of Venus.

If you can’t make it to the CNE, grab a pair of glasses from the Dunlap team on Aug. 20 at the Toronto Chinatown Festival.

Can I see the eclipse without special glasses?

Don't even try! Looking directly at the partial eclipse is very harmful to your eyes.

“One thing to note about looking at the sun is that if you look at the sun, it may feel fine for a second or two, but it doesn't mean you aren't damaging your eyes,” says Reid.

The eclipse glasses block 99 per cent of light from the sun, making it safe to look directly.

If you can’t get your hands on a pair of glasses, there's some helpful safety tips from NASA and instructions on how to make your own projection telescope.

Will Toronto ever be on the path of totality?

While Toronto won’t be on the path any time soon, we’ll be less than an hour’s drive from the path of totality in seven years' time when the total eclipse can be seen from Hamilton.

“Eclipses don't come around very often in a particular location, and to be visible from the exact same location, it happens (approximately) once every 400 years,” says Jennifer West, postdoctoral researcher at Dunlap.

“The next one that's going to pass close to Toronto is April 8, 2024, but there won't be another one after that in North America until 2099.”