My hybrid is greener than yours: how ‛conspicuous conservation’ affects product innovation

Study by U of T, UC Berkeley examines importance of social comparison 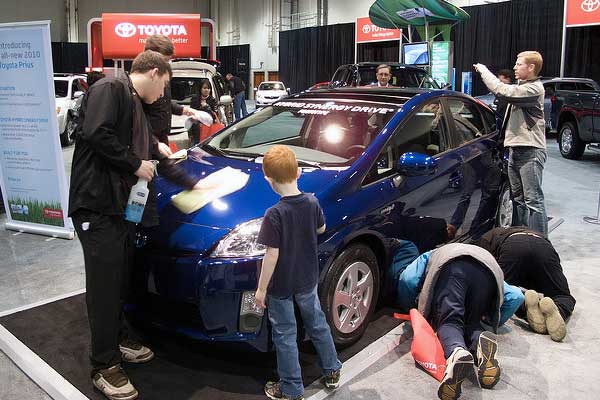 Being seen in public as the driver of a car that's considered socially responsible, such as a Prius, can convey status, researchers say (photo by King Huang via flickr)

Companies may have a bigger incentive to invest in developing socially responsible products – if those who buy those products feel they can stand a little taller than those who don't, new research says.

Consumers don't just listen to their own conscience when making decisions around buying environmentally friendlier cars or sweat-shop-free clothing, says the study from the University of Toronto's Rotman School of Management. They also consider how those choices will make them stack up against other people.

Previous research categorically suggests that more socially responsible products are more valuable. In contrast, this study uses a theoretical model to show that value – and the incentive to spend money on developing those products – is dynamic.

“We're trying to capture this whole issue of social comparison,” says David Soberman, a professor of marketing at the Rotman School who holds the Canadian National Chair of Strategic Marketing.

Soberman said this is especially important for products that are consumed “publicly” – for example, beverages and clothing known as badge products. He co-wrote the paper with Professor Ganesh Iyer of the University of California, Berkeley.

Among their many findings, the researchers found that companies have the greatest incentive to develop a more socially responsible product when the vast majority of potential users are already category users (true of many mature categories). Here, there is heightened interest in the category's social impact. In addition, greater media focus on the impact of palm oil production on deforestation may create an even bigger incentive to develop a palm oil-free soap.

In contrast, development incentives are lower when there is less consumer participation and less social concern attached to a category – think powerboats or single malt whiskey. However there may still be an incentive to innovate even in categories with low consumer participation, so long as the innovation offers a potential status bump for those who do buy it.

Gaining status through purchases of socially responsible products, such as hybrid cars, has been dubbed “conspicuous conservation.”  Previous research has put the social status value of buying a Toyota Prius – a distinctively hybrid car – as high as US$7000 U.S., even leading to tangible social advancement in regions where green consciousness is high.

"The fruits of a firm’s labour to develop socially responsible products are going to pay off the most when you are in a market that is fully covered and when the social comparison effects are strong," says Soberman.

The paper is forthcoming in Marketing Science.