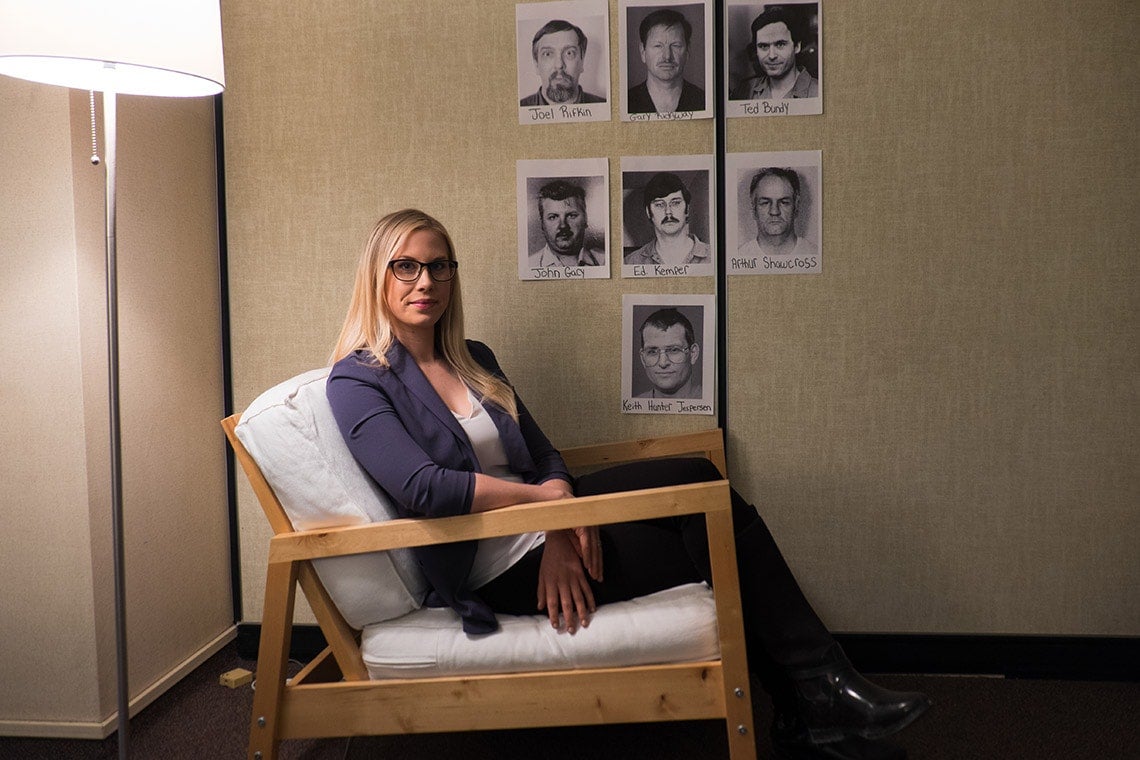 Sasha Reid, a PhD student in applied psychology, has compiled two databases, one of serial killers and another of missing persons and unsolved homicides in Canada (photo by Geoffrey Vendeville)

Sasha Reid thought it was no coincidence that several men had gone missing from Toronto's LGBTQ community in recent years. As early as last summer she believed the disappearances were the work of a serial killer, the subject of her PhD research in applied psychology.

“I've studied serial homicide for so long, 10 years now,” she says in her office, decorated with the mugshots of seven notorious killers including Ted Bundy and John Wayne Gacy. “You might call it a gut feeling, but it was more of a well-educated guess. You just don't see patterns like this often.”

What made Reid so sure were two databases she has spent years compiling – one on serial killers and another on missing persons and unsolved homicides in Canada. She came up with a profile of a suspect based on a statistical comparison of sexually motivated serial killers in her database of more than 4,800 killers and counting.

In the late summer of last year, she says she called Toronto police to volunteer her expertise, and although “they actually did listen,” they didn't take her up on her offer.

In the classes she helped teach last semester, she warned students to be careful if they visited Toronto's Gay Village.

Read more about Reid in the Toronto Star

Read a profile in Maclean's

Then in January, Toronto police arrested and charged Bruce McArthur, a 66-year-old landscaper, with the presumed deaths of two men and said there could be more victims. Police laid three more first-degree murder charges against McArthur last month and are still investigating.

In an email to U of T News, Toronto police said they wouldn't confirm the name of anyone who came forward with information. Investigators had received hundreds of tips and followed up on them, said Meaghan Gray, a police spokesperson. “One of the issues raised was the possibility of a serial killer,” she said. “However, investigators can only work with what the evidence supports at any given time.”

The man police arrested is not a perfect match with the profile Reid had sketched of a suspect months earlier: a man “a little over” 30 years old, a person of colour with a blue-collar job and history of violence.

She based her theory in part on a spreadsheet of serial killers that goes far beyond listing the offenders' birthdates and active years. She and a team of six undergraduate and graduate students sorted serial killers by hundreds of criteria, including medical diagnoses, reasons for their first arrest and the site where they disposed of victims.

The researchers gathered the data through access-to-public-records requests, media reports and information from the Atypical Homicide Research Group, a network of 150 experts in law enforcement, criminology and other fields.

“The aim is to better understand the developmental trajectory of serial killers,” Reid says. “I don't just want to know what happened, but understand how everything came together in a way that led to a life of repeat fatal violence.”

Read about Reid on CTV News

The list of killers starts alphabetically with “Abbott, John Henry,” an American author who fatally stabbed two people, and ends with “Zwanziger, Anna,” a German housekeeper who, according to Murderpedia.org, confessed to poisoning people with arsenic in the early 1800s.

In Reid's view, the Toronto serial killer would be a little older than 30 because many of the homosexual serial killers in her database had started later than heterosexual killers.

He would be a man because only male offenders in her database targeted young, healthy men.

She assumed he was a person of colour because some of his victims were not Caucasian, and offenders “kill people from within a community they're familiar with.”

He would have a blue-collar job because the serial killers she examined had little or no university education. And she thought he would have a history of violence because most of the killers in her database had been responsible for, though not necessarily convicted of, “sexual violence or other interpersonal violence.”

It was by connecting the dots between this database and another she keeps as a side project on missing persons and unsolved homicides in Canada that Reid concluded there was a serial killer in Toronto. The missing-persons database contains over 7,500 names. Reid, who is Métis, says she keeps this record out of concern for missing and murdered Indigenous women, and because she knew a girl who disappeared from her high school in Dryden, Ont.

The day McArthur was arrested was an “emotional moment” for Reid. Though the charges against him have yet to be proven in court, Reid was relieved an arrest had been made and took the news as a sign that her research can be useful. Her sketch of the suspect was off in some respects, but she stressed that profiling serial killers is not an exact science.

She plans to publish her dissertation on sexually motivated serial killers next year.

Her supervisor, Richard Volpe, a professor at U of T's Ontario Institute for Studies in Education, says her findings “point to the dangers of simplistic single-cause explanations” for what drives people to kill. “Although trauma appears to be present in the lives of many of the subjects, it isn’t a sufficient explanation for their deeds,” he says. He added that her work “should have important implications for both life development studies and forensic science.”

Michael Arntfield, a criminologist and associate professor at Western University who isn't involved with Reid's work, says “recent events in Toronto obviously underscore the relevance of this research and how it amounts to applied scholarship that goes well beyond the university and which is very much in the public interest.”

Arntfield, a former police officer, met Reid last fall at a conference at Boston College hosted by Ann Burgess, a pioneer in the assessment of victims of trauma and abuse who worked with the FBI academy to study serial offenders. (She's the inspiration for a character in the Netflix drama series Mindhunter.)

Arntfield says he was impressed with Reid's presentation. It was clear to him that Reid's detailed homicide dataset and behavioural analysis is at “the forefront of the 'new' criminology, which is highly interdisciplinary, publicly relevant, technologically and socially progressive, and fully actionable in the real world.”