​Six spots for a picture-perfect U of T convocation selfie 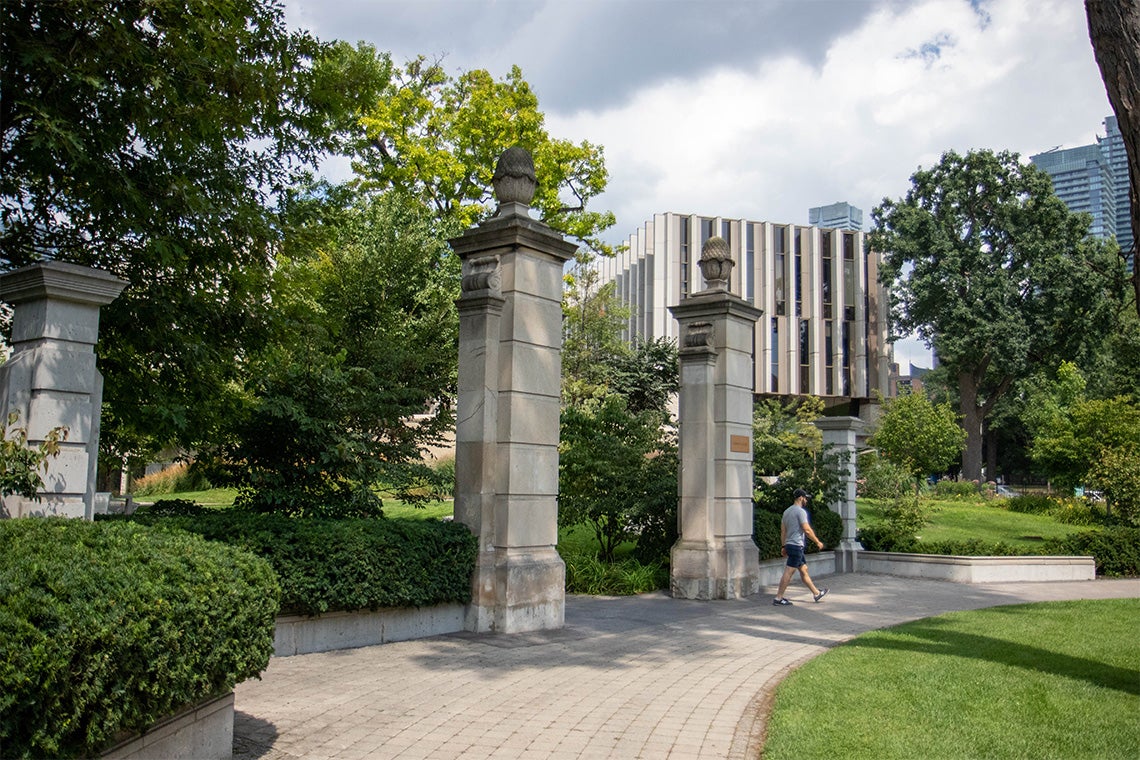 A serene reprieve in the middle of downtown Toronto, Philosopher's Walk offers a variety of backgrounds for a great post-convocation photo, including cobblestone paths, benches, lush lawns and a backdrop of historic masonry (photo by David Lee)

From lush green spaces to quaint quads and eye-catching architecture that ranges from the mid-19th century to the modern day, the University of Toronto’s three campuses are blessed with several picturesque locations in which to take selfies, family portraits and celebratory group photos following this year’s spring convocation ceremonies.

With construction underway on U of T’s transformative Landmark Project, here are a few visually stunning – if slightly off the beaten path – spots (and links to their locations using the university’s map tool) where U of T grads can capture the big day.

The colleges and quads 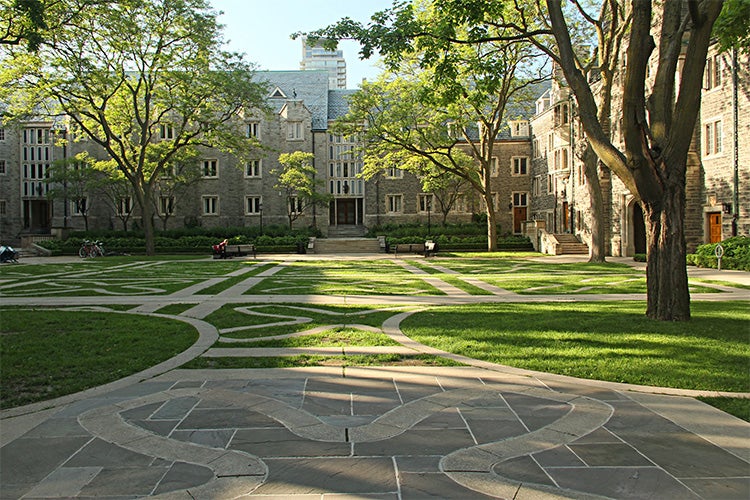 There are several stunning quadrangles on the St. George campus, each with their own unique character – and all roughly within a roughly 10-minute walk from Convocation Hall.

The nearest to Con Hall is the Sir Daniel Wilson Quad, which can be accessed via King’s College Circle. From there, a short walk will take you to Trinity College Quad, which blends modern and medieval design cues to stunning effect.

Crossing Queen’s Park to the eastern edge of campus, you will find Victoria College’s quad, with its stunning views of Burwash Hall; and St. Michael’s College, whose campus includes Odette Hall – constructed in 1856 and U of T’s oldest building in continuous academic use. The Bennett Gates mark the southern end of Philosopher’s Walk, a meandering pathway that traces what was once Taddle Creek (photo by David Lee)

From the Queen Alexandra Gateway in the north to the Bennett Gates in the south, the leafy Philosopher’s Walk is a meandering path that connects bustling Bloor Street to Hoskin Avenue.

A serene reprieve in the middle of downtown Toronto, the walk features wide cobblestone paths dotted with benches and lush lawns set against a backdrop of old masonry – all of which offer a variety of backgrounds for a great post-convocation snapshot.

It’s also a place with historic and cultural significance – the pathway traces what was once Taddle Creek, a gathering place for various Indigenous Peoples such as the Seneca, Huron-Wendat and the Mississaugas of the Credit First Nation. 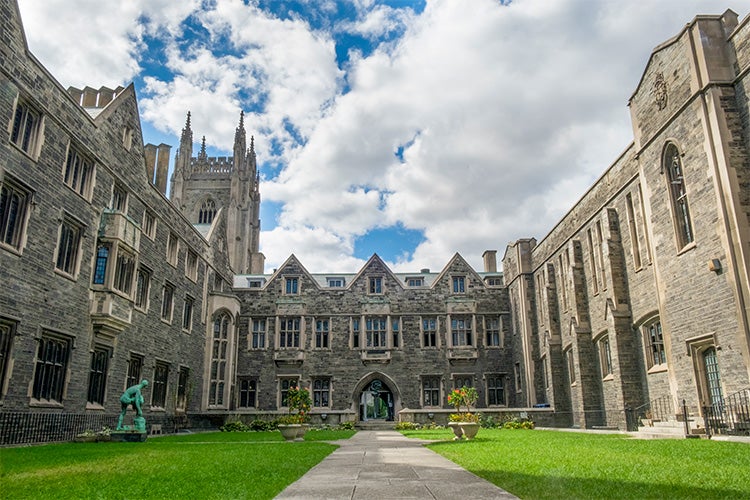 Hart House’s quad is home to large bronze sculptures and offers elegant views of the building’s stonework and windows. The steps in front of Hart House are also a photo favourite – but bear in mind that front of Hart House is currently a construction zone due to U of T’s work on the Landmark Project. 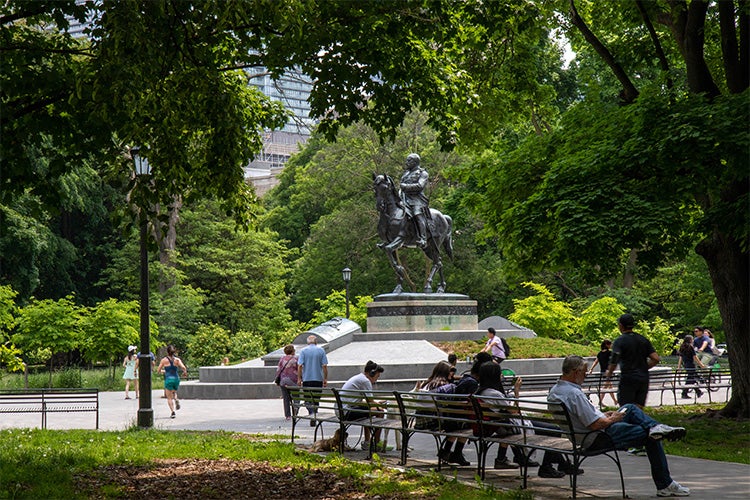 Queen's Park, a giant green space in the midst of the St. George campus, is a popular spot for U of T students throughout the year (photo by David Lee)

Just a short hop over Queen’s Park Crescent will take you to Queen’s Park, with its expansive lawns, towering trees and views of the Legislative Assembly of Ontario.

Watkins Pond (and bridge) at U of T Mississauga 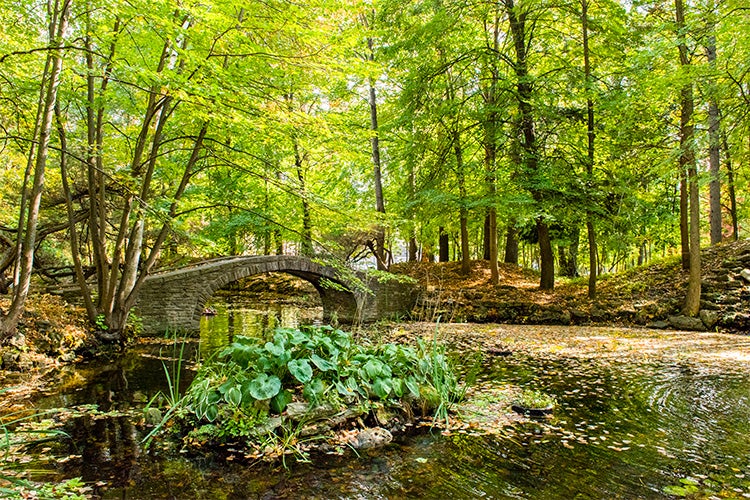 Watkins Pond is a photographer’s dream and it’s located right alongside Principal’s Road at U of T Mississauga. To get there, follow Outer Circle Road from the campus’s north entrance and take the small road to the left, which will lead you down Principal’s Road to the pond and bridge, nestled in a grove of trees.

Valley Land Trail at U of T Scarborough 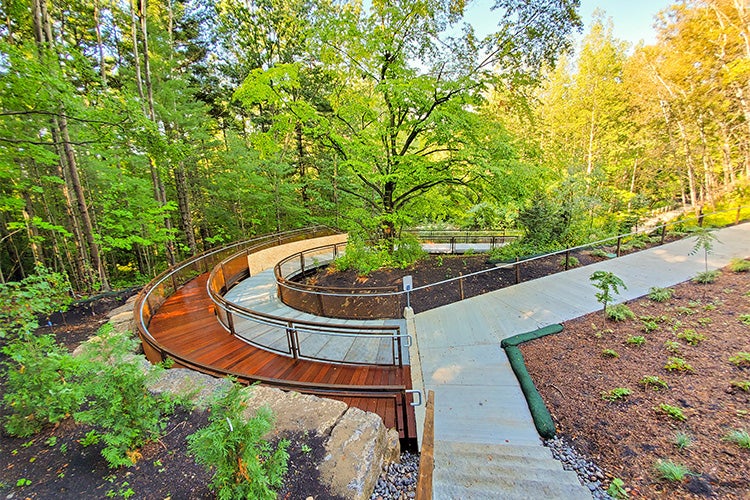 The Valley Land Trail was inaugurated just three years ago and has fast become a favourite destination for nature-lovers and photographers at U of T Scarborough. This 500-metre-trail connects the campus to the Highland Creek Ravine and boasts several lookout points with accessible seating.

The trail overlooks the gorgeous Highland Creek Valley, so don’t be surprised if you’re photobombed by one of the many colourful birds that inhabit the area – and keep an eye out for opportunities to add a pic of a white-tailed deer or red fox to your convocation camera roll.