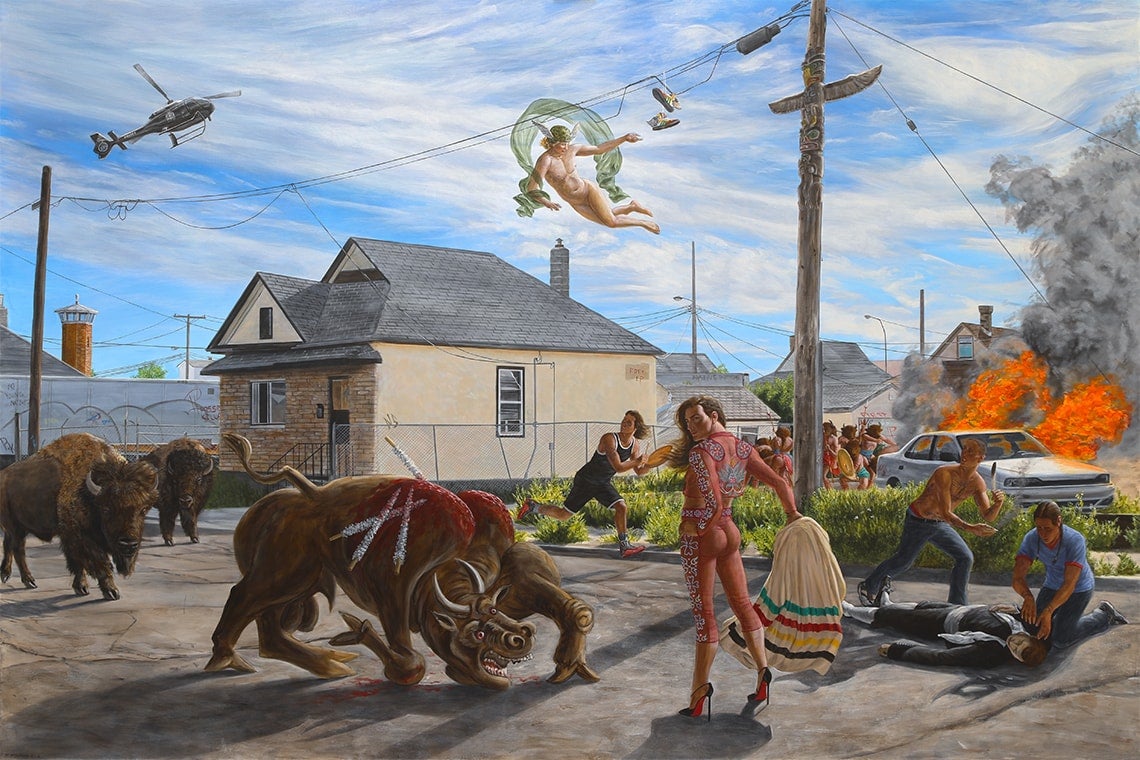 One of the paintings on exhibit will be Kent Monkman's 2014 painting “Seeing Red,” which depicts symbols from Canadian history while acknowledging different eras of art history (photo courtesy of Art Museum)

The Art Museum at the University of Toronto has partnered with artist Kent Monkman for a large-scale show of new works exploring the 150 years before and after Canadian Confederation.

More than two years in the making, the show features macabre and haunting artifacts – from leg irons to empty cradleboards – interspersed with large, dramatic paintings and life-sized installations.

“Shame and Prejudice: A Story of Resilience” debuts on Jan. 26, kicking off a cross-Canada tour for 2017.

The exhibit came about after Barbara Fischer, director of the University of Toronto Art Museum, approached Monkman, who is First Nations Cree, back in 2014, inviting him to put together a large show to commemorate Canada’s 150th anniversary.

It was part of an effort by the Canadian Museums Association to reflect on how museums have framed Canadian history, Fischer says – and she felt Monkman was the right artist for this project.

“I saw an exhibition of his where he brought together artifacts and materials, artworks by other artists and people from across hundreds of years, ” she said. “I was amazed how different history can feel.

“You can see history with new eyes.”

Professor Donald Ainslie, principal of University College, is chair of U of T's sesquicentennial steering committee.

“Monkman’s show exemplifies how the university is responding to the sesquicentennial:  not just with a celebration but with an intellectually informed, critical narrative that asks the hard questions about our nation’s history and where it is headed,” he says. “This is an especially important exhibit for the university as we mark Canada’s 150 years and begin to respond to the federal government’s – and U of T’s own – Truth and Reconciliation Commission (TRC) actions.”

Read the Toronto Star story on the exhibit 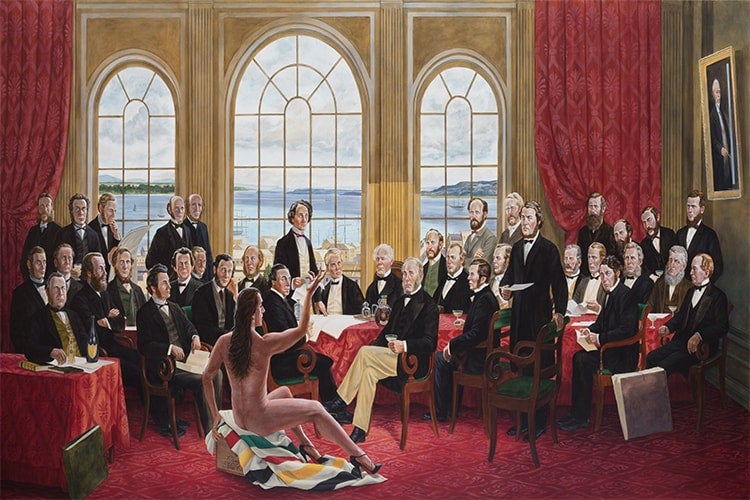 The exhibition is laid out in a linear narrative, a story told by Monkman’s alter ego, a trickster character named Miss Chief Eagle Testickle – a play on the phrase “mischief egotistical.” A series of didactics written in Miss Chief’s voice tells a story playing on Jane Austin’s Pride and Prejudice narrative.

“The idea is that the Bennett girls were trying to marry well and improve their lot in life, so Miss Chief is trying to improve the lot of her own life and that of her family,” explains Monkman, standing in front of his painting of Miss Chief seated on a chair under the looming figure of John A. McDonald, holding a glass of champagne.

“A country wife,” says Monkman looking up at the painting. “A lot of trappers and men who were traders who were going out West would marry Indigenous women,” he said. “Sometimes they stayed with them and sometimes no.”

The exhibit fills the viewer with an uncomfortable mix of horror and humour – an effect Monkman elicits by placing artifacts collected from museums across Canada and in Europe next to his own works that play with the viewer, teasing out the ridiculous in colonial practice.

Copies of journal pages written and painted by Father Nicolas Point, a Jesuit priest, record his travels to Indigenous communities and depict scenes of Christianity and traditional life. Next to them, a life-sized crèche scene depicts an Indigenous version of the Virgin Mary and Joseph looking lovingly down on Miss Chief, laying on a Hudson Bay blanket.

The crèche is not a manger, it’s a rez house with “dilapidated, porous, low living conditions, commodity foods with price tags showing how expensive it is to live in the north, bottled water,” says Monkman.

“In the story that frames this exhibition, Miss Chief talks about the importance of family, she talks about community, and the impact of colonial policies on Indigenous people,” he says.

Monkman points out an absurd feature of the crèche scene.

“Part of my work deals with how museums represent Indigenous people and the medium for that is the diorama,” he explains. “At the Natural History Museum in New York, they use one face to standardize all Indigenous people in North America, male or female.

“So this is my head on mother, father and little baby Miss Chief.”

The multi-room exhibit examines themes of poverty, illness, incarceration and trauma – all symptoms of a history Canada has begun to explore with Truth and Reconciliation. The role museums play in chronicling this history is important, Fischer says.

She explains that the University of Toronto – which has just released its own TRC report – has been revamping its collections to be more inclusive and reflective of the university’s Indigenous community.

“Where the power of this project will really reveal itself will be in how Kent can tell us his bigger story,” says Fischer. “It is a very moving project.”

One of the most devastating installations may be a room with a wall of empty cradle boards, dedicated to Indigenous children, the history of residential schools and the Sixties Scoop.

“I think we can talk about it, but to see it is another level of understanding,” Fischer says. “This exhibition will produce a much more intense sense of empathy and recognition for what happened.”

Monkman gestures to a painting depicting a woman spilling out of a skid row bar on Winnipeg’s main street.

“I went to the Manitoba Museum where I would see these dioramas of Indigenous people kind of frozen in the pre-contact idyllic state,” he recalls, “and then I would walk out and see this literally right outside the museum.

“I could not reconcile the two worlds – what had happened to Indigenous people – I remember classmates looking at me, trying to get an answer, and I didn’t even know how to talk about it.

“In many ways, that shaped this exhibition – and a lot of my work.”

Fischer is encouraging students and faculty from across the university to visit the exhibition and learn more about Canada’s Indigenous history.

The Art Museum welcomes the public to attend the opening reception of “Shame and Prejudice: A Story of Resilience” from 6:30 p.m. to 8:30 p.m. on Jan. 26th.