Seven takeaways from U of T Entrepreneurship Week 2022 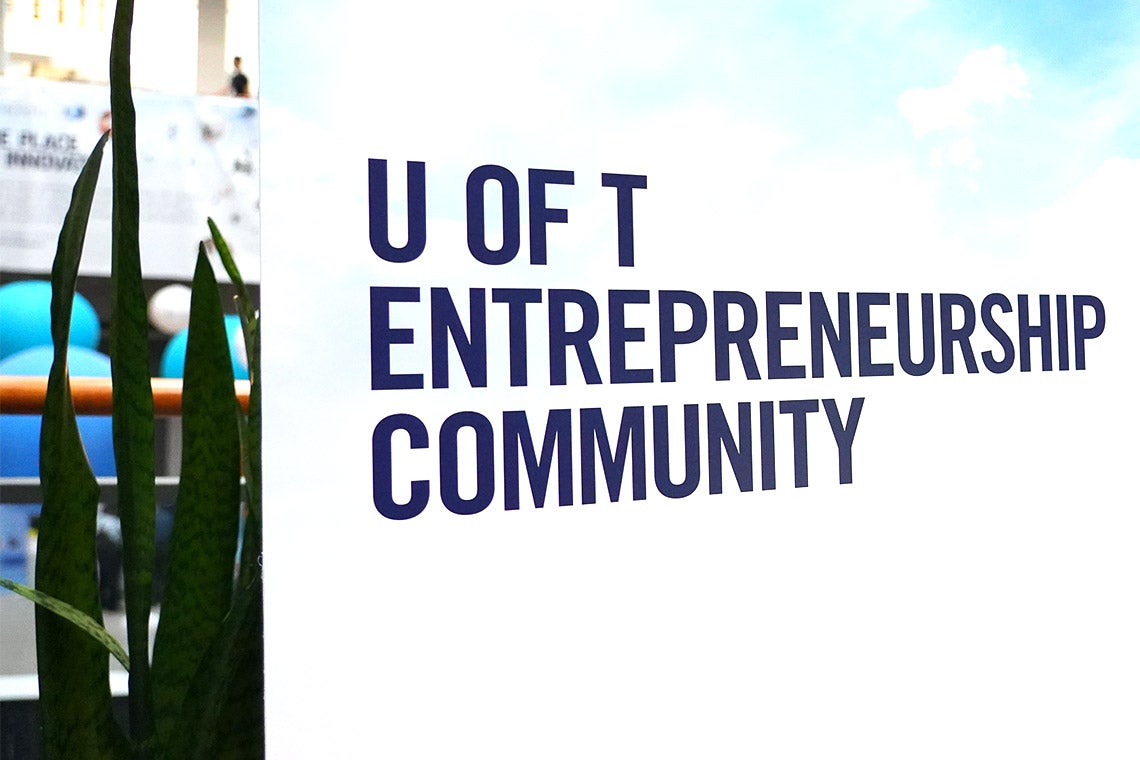 The University of Toronto recently hosted its sixth annual Entrepreneurship Week, a four-day showcase of the university’s vast and vibrant entrepreneurial and startup ecosystem.

Featuring over 15 sessions – startup showcases, pitch competitions, keynote speakers, workshops, panel discussions and more – the event shone a bright light on the breadth and depth of the university’s entrepreneurship community.

Here are some of the top insights for current and prospective entrepreneurs from this year’s U of T Entrepreneurship Week:

Get rich quick? Not likely

In one of the standout moments of the week, sprinting legend and business leader Donovan Bailey shared his insights on the parallels between sport and business.

“I think the greatest misnomer is that you can get rich overnight. You can’t. You also can’t become an Olympic sprinter overnight. The first thing I tell entrepreneurs is the same thing I tell CEOs and young athletes: if you don’t put the work in, you’re not going to get the results.”

Hard work, passion, discipline and focus were among the characteristics that Bailey credits for his success as both an athlete and a businessperson.

In a candid fireside chat with Rita Trichur, a senior business writer for the Globe and Mail, Bailey shared his lessons in overcoming adversity – “win or learn” – and said that failing isn’t a word he likes to use.

Reinforcing the principle of community, Bailey encouraged young entrepreneurs not to be shy and to seek out successful people in their industry to provide mentorship.

“There are such incredible successful people out there who are willing to share the knowledge.”

Toronto is a hotbed for startups

U of T was named the fastest-rising global institution for startup founders in the 2021 PitchBook rankings – jumping six places. And the university remains the number one university in Canada for research-based startups and is among the top 10 university-managed incubators globally.

“I like to think that the U of T and the City of Toronto embody some of Donovan Bailey’s commitment to excellence and, to use a technical term, swagger,” said U of T President Meric Gertler during his introduction of Bailey at the UTE Speaker Series.

In total, entrepreneurs associated with U of T have launched more than 600 venture-backed companies, raised funding in surplus of $2 billion and created more than 9,000 jobs in the last decade.

“The U of T is an anchor of the city’s achievement in creating an innovation ecosystem with 10-plus accelerators and entrepreneurial hubs across the U of T’s three campuses,” said John Tory, Toronto’s mayor, in his opening remarks at the speaker series.

“These talented entrepreneurs are fostering meaningful economic and social impact, and this is one of the reasons why global investors are flocking to Toronto and international conferences like Collision want to be hosted by our inclusive and innovative ecosystem.”

In fact, Toronto-based and U of T-affiliated startups Waabi, Ada, Deep Genomics, Xanadu and Cohere each raised over $100 million in funding from investors last year.

Entrepreneurship is often thought of as a solo journey. But several of last week’s sessions made it clear that community, support systems and networks are the differentiating factor in the success story for many entrepreneurs.

For Jonathon Redbird, entrepreneurship is all about providing solutions that benefit your entire community – not just the bottom line.

Speaking at the session Two-Eyed Seeing in Entrepreneurship, Redbird and Christina Tachtampa of Redbird Circle Inc. focused on how Indigenous Knowledge applies to the fields of entrepreneurship and business education given the Indigenous Peoples’ long history as innovators and entrepreneurs.

Slowing down, adding value to your community and thinking about entrepreneurship in a way that considers the self, community and our connection to the spirit of the land, were some of the key takeaways from this session which provided a refreshing perspective on startup culture.

Community was a topic raised throughout the week – most notably in relation to the two new programs launched to support Black entrepreneurs, the Nobellum Innovator Program and the Black Founders Network (BFN) Accelerate program.

Built by and for the Black community, BFN was launched in the fall of 2021 to support Black founders, create more Black-led business and celebrate Black Excellence.

At the UTE Speaker Series, Efosa Obano, program manager of the Black Founders Network, announced that applications are now open for the first BFN Accelerate cohort, which will accept eight to 10 Black-led startups to participate in its three-month program this summer.

Moving the needle on gender diversity

In recent years, there’s been a perceivable shift in the startup playing field, which has historically been dominated by men. In part, this can be attributed to the greater emphasis placed on creating new opportunities for women-identifying entrepreneurs.

ICUBE at U of T Mississauga and the Health Innovation Hub (H2i) are two U of T’s accelerators dedicating space to women-identifying entrepreneurs with inspiring speaker series such as Fireside at FemSTEM and a stage to showcase ventures at the Pitch with a Twist business competition and FemSTEM Pitch Competition, which is taking place on March 24.

In celebration of International Women’s Day, Pitch with a Twist (part of Entrepreneurship Week), provides a community of strong female founders with a platform to showcase their ventures, network with top companies and win cash prizes.

For, Justine Abigail Yu, the founder of Living Hyphen – taking up space meant creating one.

During the panel discussion at Pitch with a Twist, Yu shared her motivation behind launching her startup. “In 2015, there wasn’t a lot of representation across media including the arts and literature space in Canada,” she said.

Recognizing this, she set out to create a space by and for bi-racialized writers and artists to share their stories and work by launching a magazine and podcast with a mission to “reshape the mainstream.”

In a fireside conversation hosted by H2i, Sandy Skotnicki, a U of T alumna and the founding director of Bay Dermatology Centre, spoke about opportunities to innovate in the field of dermatology and reflected on her successful 20-plus year career advocating for changes to patient care and diagnosis.

Skotnicki’s advice to women entrepreneurs? “If you have something you’re strongly passionate about, think big, start bigger, don’t be afraid to do that.”

Innovation in the arts

Similar to the approach taken by the creators of RedBird Circle, entrepreneurship in the arts is about more than generating revenue and raising venture capital.

U of T artist and researcher Adrian Berry explained the approach as follows: “Recognizing a challenge and figuring out how to respond in an innovative way – but also in a thoughtful way. We try to innovate in a way in which we can improve our lives and thrive and keep making art.”

Berry and Hayley Janes took the stage at Entrepreneurship Week in a new session hosted by the Toronto Music Entrepreneurship Exchange. The research duo spoke to their individual research projects – both of which address the same challenge: precariousness in the arts sector.

“Toronto art workers and art organizations were vulnerable prior to the pandemic, during the pandemic, and after – in this post-pandemic world – due to limited resources, years of sector-wide financial precarity, societal inequalities, the list goes on and on,” Berry said.

The panel discussion was moderated by Ely Lyonblum, strategic research development officer in the Faculty of Music at U of T. In addition to Berry and Janes, the session featured Faculty of Music alumni Adam Fainman and Renee Fajardo, who shared their unique perspectives on entrepreneurship and innovation in art and its role in cultural design.

Fainman, whose innovation in beatboxing technology led to new collaborative opportunities across music genres, and Fajardo, whose project aims to cater opera to a 21st-century audience, exemplify how innovation and an entrepreneurial mindset can make an impact in the arts.

Mental health is health. And entrepreneurs, like everyone, can benefit from prioritizing self-care and mindfulness to cope with the stress of work and life.

Beginning with a guided meditation led by registered psychotherapist Soroosh Vafapoor, H2i hosted a stress management and mental health session to close of Entrepreneurship Week on a more relaxed note.

Moderated by Professor Paul Santerre, director of H2i, the intimate session also provided professional insights on mental health best practices from Vafapoor. Entrepreneur or not, the tips offered by the panelists provided actionable tactics to mitigate stress and make time for mental health.

Wodlinger touted mastering the art of delegation to “spread the stress,” rather than carrying it all on our own.

Creating balance between work and home is also key.

“Make rules for yourself, define barriers and stick to them,” said Wodlinger.

One way to do this: add appointments to your calendar. Whether it’s penciling in time to focus on a project distraction-free or reserving a block of time for daily meditation, scheduling appointments with yourself can help you take back control of your day.

Vafapoor, meanwhile, recommends leaning toward self-compassion and kindness to cope with stress. “Be aware of what narratives arrive at your mental doorstep and challenge their authenticity and reality,” he said.

He also suggested that movement could help to decompress the mind – not necessarily “working out” but moving the body in the ways that feel good, whether that’s dancing, yoga or another form of mindful movement.