‘A sense of belonging’: Third annual Black Graduation event to be held at U of T Mississauga 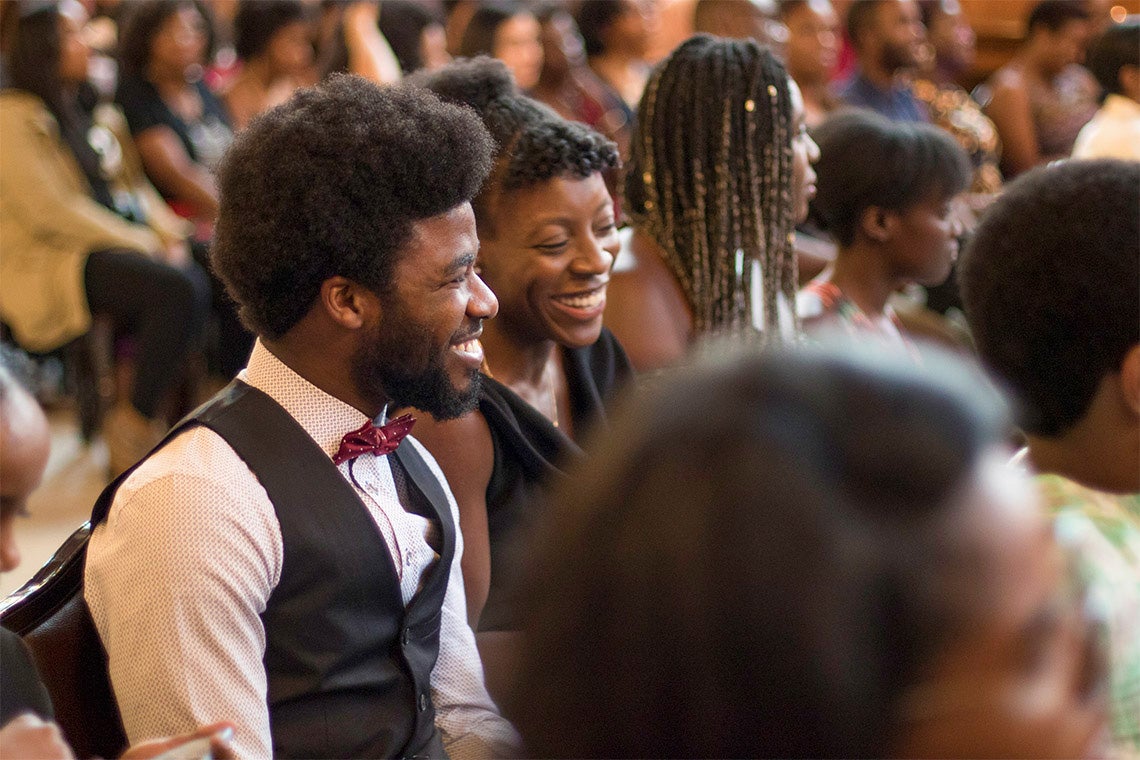 Black Graduation, a student-run event, will take place at U of T Mississauga on June 28 with U of T alumna and Member of Parliament Celina Caesar-Chavannes delivering a keynote presentation (photo by Geoff Vendeville)

With convocation now under way, students at the University of Toronto are putting the finishing touches on the annual Black Graduation event, a student-run celebration that follows the university's official convocation ceremonies.

After two years of being held at Hart House on the downtown Toronto campus, this year's Black Graduation will be held, for the first time ever, at U of T Mississauga on June 28. The keynote speaker is Celina Caesar-Chavannes, a U of T alumna and Member of Parliament for Whitby.

The celebration, similar to Black Graduation events at Harvard University and Columbia University, is an opportunity for students to toast their achievements and  network with staff, faculty and honoured guests. The event also celebrates students who completed U of T's Transitional Year Programme, which helps students acquire the necessary qualifications for university admittance.

Kalkidan Alemayehu, one of the event’s organizers, says the decision was made to relocate Black Graduation to make it more of a tri-campus event.

“We didn’t want it to be happening on just one campus,” she says, adding the event could be held at U of T Scarborough next year.

More information about the Black Graduation event can be found here

In addition to Caesar-Chavannes, attendees will hear from U of T faculty members, staff and alumni. That includes: Kofi Hope, a senior policy advisor at the Wellesley Institute and U of T strategic consultant and visiting scholar; Sandy Hudson, a communications specialist and vice-chair of the Black Legal Action Centre; and Zanana Akande, who was the first Black woman elected to Ontario’s legislature and the first to serve in cabinet.

Hope, Hudson and Akande will also present awards to students during the event that recognize excellence in research, entrepreneurship, outstanding athletic achievement and in STEM (Science, Technology, Engineering and Mathematics) subjects. The winners will all have recieved degrees at either the undergraduate or graduate level.

Black Graduation is a great way to make connections with the larger Black community, says Alemayehu.

“Having Black Grad, it gives people a sense of belonging,” she says, adding that it can make the transition to post-graduation life easier.

“If you see somebody that looks like you, who talks like you, you’d feel more comfortable and you’d feel like you belong, and that [that could] motivate you to do better.” Caesar-Chavannes (pictured right), who earned her MBA from the Rotman School of Management, says that she immediately agreed when asked to speak at the event.

“[Black Grad] is a great experience for Black students to have the opportunity to celebrate together in a space they’ve contributed to,” says Caesar-Chavannes, who was elected in 2015 as a member of the Liberal Party and served as a parliamentary secretary to Prime Minister Justin Trudeau, but now serves as an independent.

Caesar-Chavannes’s keynote speech will explore “hard lessons” she learned as a U of T student – an experience which was, at times, “difficult,” she says.

The first in her family to attend university, she says she spent six years completing her bachelor’s degree, earning a GPA that was lower than she expected. She remembers sitting in a first-year biology lecture at Convocation Hall, feeling overwhelmed.

“It was a hard lesson in life,” says Caesar-Chavannes, who aspired to become a neurosurgeon. “I think that when you’re speaking to individuals, regardless of their backgrounds, they appreciate knowing that there is success after failure.”

Her success came after returning to U of T as a research coordinator. She came under the tutelage of Carol Greenwood, now a professor emeritus in the department of nutritional sciences, who encouraged her research into nutrition and its connection to Alzheimer’s disease. The relationship helped open the door to other opportunities, culminating in an MBA, managing a health care-based research business and, eventually, a life in politics.

“There is a beauty to things being difficult, a beautiful sense of growth, experience and dogged determination that allows you to do what you do and succeed there,” says Caesar-Chavannes, who is thankful for her relationship with Greenwood.

Though feeling nervous about her keynote, Caesar-Chavannes says she’s looking forward to the opportunity to share her stories at Black Grad and to help students make deep connections.

“To whom much is given, much is expected,” she says.

“Within our communities we understand that, and we know that we need to support each other.”