Sea of troubles: Chelsea Rochman explores how plastic is breaking down – and where it’s ending up 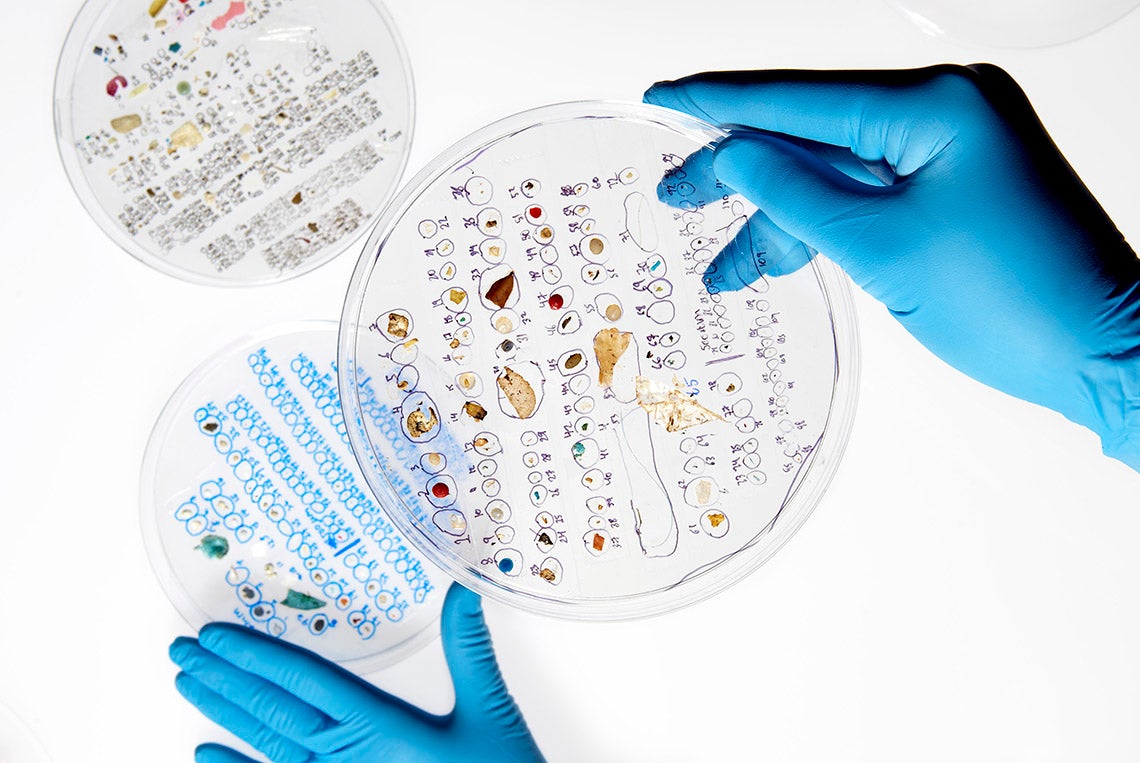 Microplastics, which are less than five millimetres in size, include pellets from industry, microbeads from personal care products and tire particles from urban runoff (photo by Paul Weeks)

When Chelsea Rochman was six years old and a little anxious in the aftermath of her parents’ divorce, she was taken to a child psychologist. The doctor asked: If you could have three wishes, what would they be? One is forgotten, but, 30 years later, Rochman can clearly recall the other two wishes: the ability to see better (she’s had glasses since she was nine months old), and an end to all the trash in the world.

Today Rochman is an assistant professor of ecology and evolutionary biology at the University of Toronto researching microplastics, particles of plastic often barely visible to the naked eye (wish one). More specifically, she’s interested in how they pollute lakes, rivers and oceans (wish two), affecting ecosystems and – ponder this the next time you eat fish – the food chain. The research on microplastics taking place in the Rochman Lab at U of T is rippling out of academia, informing policy change including a recent multi-country ban on microbeads – those non-biodegradable exfoliators that made many of us suspicious of our face wash.

An unusual, zigzagging personal path has taken Rochman from aspiring Hollywood actress to speaking at a United Nations meeting about the need to reduce plastic use. At 37, she’s become a frontline ambassador for a critical environmental issue that almost no one wanted to talk about a decade ago.

Standing in a sun-drenched lab off Spadina Crescent this past January, Rochman holds up a bagel-sized Petri dish dotted with tiny specimens of coloured plastic, some smaller than the pin on a thumbtack. “They’re pretty, huh? I kind of want to take a picture and blow it up,” she says in her super-fast voice, vowels loping in a singsong way.

Several students in lab coats murmur agreement. One sits in front of a microscope using tiny pincers to examine a microfibre found in the stomach of a Lake Ontario fish. Another tells Rochman she’s identified a pre-production pellet from a chemical company that was likely destined to become a bottle until it rolled down the drain and into a harbour.

Since the 1950s, when plastic was heralded as the miracle material of the postwar era, humans have created more than seven billion tonnes of it and only nine per cent has ever been recycled. The rest has been incinerated, landfilled or has broken into fragments that end up in our soil, air and water.

The smallest pieces, at less than five millimetres, are called “microplastics,” and Rochman started thinking about them as a marine ecology undergrad at UC San Diego. During a visit to a largely uninhabited research facility on an island off Australia’s coast in 2006, she noticed metres of trash strewn across the beach. The turtles in the rehabilitation centre were, she says, “pooping plastic.” She had some questions, and Google led her to the Great Pacific Garbage Patch, an 80,000-tonne mass of debris floating between Hawaii and California, largely made up of microplastics created by sun and waves eroding bigger plastics. More questions: What about the chemicals in the plastics? How exactly do they make their way to fish and wildlife like those pooping turtles? Rochman decided to do her graduate work at UC Davis studying how plastic pollution affects ecosystems and food webs.

For one UC Davis study, Rochman went to the supermarket and bought some fish. It turned out that one in four contained microplastics, a number that now seems low: Every fish in the Great Lakes has plastic in it, she says. A newly published Rochman Lab study found more than 100 synthetic microfibres in the stomach of a single fish. Many of the 23 to 36 trillion microfibres that annually end up in Lake Ontario watersheds come from our own clothes, released during laundering. But the study shows that a large percentage of those fibres could be prevented from entering the environment by adding a simple commercial filter, available at hardware stores, to a washing machine.

This is good news because microplastics can harm the growth, feeding and reproductive cycles of fish. Less known is exactly what concentration of plastic in the environment is dangerous for humans – a largely unstudied area. “I’m not working on it yet, but we do work on human exposure to microplastics via seafood and drinking water,” says Rochman. Chelsea Rochman, an assistant professor of ecology and evolutionary biology at U of T, is researching microplastics (photo by Paul Weeks)

“Contaminants are everywhere but we don’t really know yet the answer to the questions, ‘How bad is bad? What’s a tolerable amount?’ We have to figure out how to stop it from reaching a tipping point for human health.”

Microplastics are a terrestrial concern, too. A fridge-like HEPA filter whirrs in a corner of Rochman’s lab in an attempt to keep the room free of dust and particles from clothes and carpets. “I don’t think seafood is our biggest source of plastic. I think it’s drinking water and dust falling on our food,” Rochman says, gesturing at a sunbeam in a window, catching specks. “See that? Microplastics.”

For a native of Tucson, Ariz., dust makes a more sensible preoccupation than marine life. But Rochman’s parents were hippie-ish, and she spent much of her childhood outdoors, hiking and swimming. On Earth Day in high school, she ditched class to gather bags of trash in the desert. Rachel Carson’s seminal environmentalist book Silent Spring inspired Rochman. “I was fascinated with natural disasters. Now I study anthropogenic disasters,” she says.

Rochman initially majored in atmospheric sciences at the University of Arizona, but the program was cancelled during her second year. She’d always acted, so she made a dizzying pivot to performing arts major. After two years, she packed up her car and drove to Hollywood where she did the la-la land thing: waitressing, taking classes and auditioning. Extra work on The West Wing and Curb Your Enthusiasm brought a non-speaking role as a bridesmaid in American Pie 3, the teen sex comedy franchise that was by then a case study in diminishing returns. “A terrible movie. Ten days on set and it turned me off the whole industry. It was icky and my brain was bored.”

Rochman reinvented again, ending up at UC San Diego as a biology major and working at the aquarium down the hill. There, she discovered a love of teaching, revelling in field excursions like driving a tank of sharks to a school and taking children snorkelling and kayaking.

That affection for students has been on display since arriving at U of T three years ago. When we met, 25 lab students had been at her house the night before for a taco party in honour of a seminar speaker. Rochman started the U of T Trash Team in 2017, taking students on garbage-picking excursions off campus for research and to spread waste literacy. Last summer, the team unearthed 31 kilograms of trash at the mouth of the Don River in less than two hours. Now Rochman is working with Ports Toronto to find technology to prevent litter from entering Lake Ontario and to educate the public about waste.

Kennedy Bucci, a second-year PhD student who came to U of T specifically to work with Rochman, helped catalogue the heaps of straws and bottles that hot day. “I’ve learned from Chelsea that if we do science in our bubble, there’s not much point,” she says. “She really believes that what matters is when you bring research to the public and policy-makers.”
To that end, Rochman consulted on the G7 Ocean Plastics Charter, an international agreement to halt marine dumping, spearheaded by Canada. She’s also a science adviser to the non-profit Ocean Conservancy, and frequently finds herself at the table with representatives from Dow and Coca-Cola, trying to explain why reducing production is as important as recycling plastic waste. “It’s still frustrating, but at least they’re listening. They know microplastics are real.” This is a change from the denial phase of a few years ago, when Rochman was regularly mocked on industry blogs.
For a long time, the community of microplastic scientists was, well, micro, but lately, Rochman has noticed a boom in research and academic postings. The interest is nascent, not unlike climate change study a generation ago, and it’s an uphill battle: plastic production is expected to increase by about 40 per cent over the next decade. But Rochman’s voice is now part of a louder chorus advocating for practical responses: proper recycling; less usage; and policy change around production, including taxation.
“I have all these optimistic students around me so I don’t get too jaded,” she says. “They’re hopeful, so I have hope, too.” And surely hope is at least as powerful as a wish.

Chelsea Rochman’s outreach program, the U of T Trash Team, is supported by more than $25,000 in donations from the American Chemistry Council, the Canadian Plastics Industry Association, the Ocean Conservancy and the Alliance for the Great Lakes.