The science of drunk fish: U of T researcher recognized for advances in behavioural neuroscience 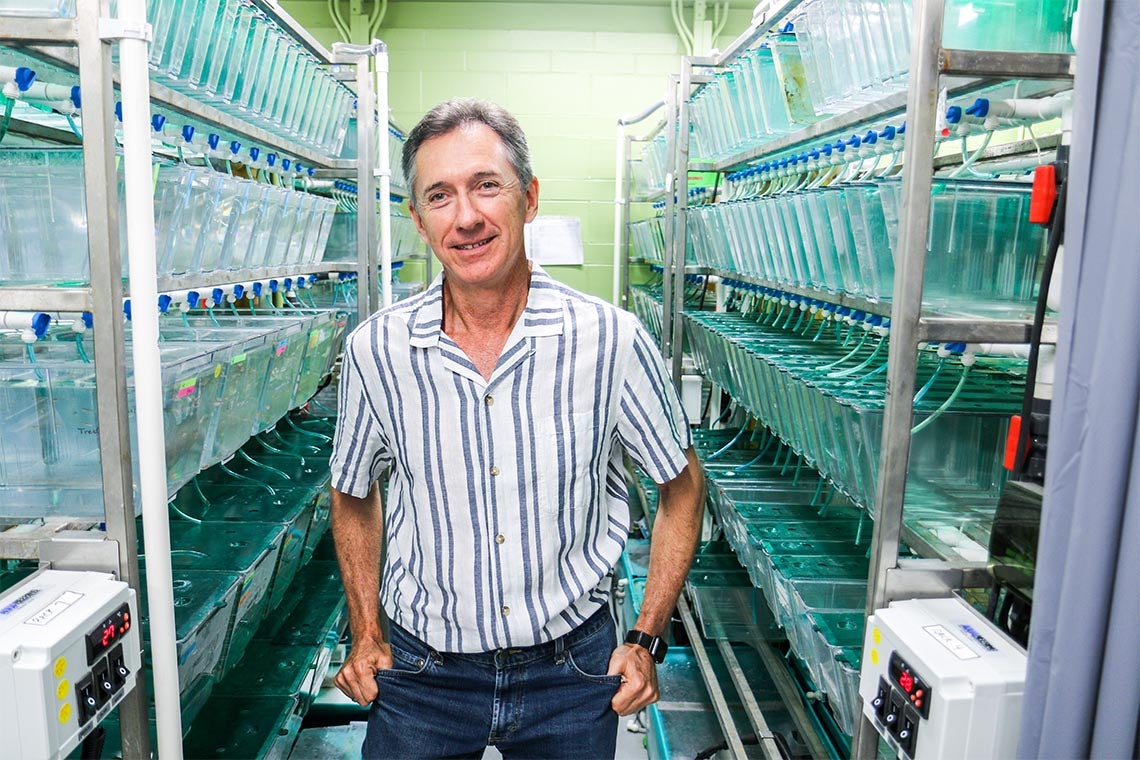 Robert Gerlai, a psychology researcher at U of T Mississauga, is surrounded by tanks used to hold zebrafish, which he uses to study memory, social behaviour and alcohol-induced behavioural changes in humans (photo by Perry King)

Robert Gerlai recalls attending, at the age of six, a Christmas party at his father’s law firm in Hungary. Someone poured champagne – a lot of it – into a fish tank.

The fish ultimately died while everyone was away on holiday, leaving a bad stench in the office and a young Gerlai with the unenviable job of cleaning it up. The episode sparked Gerlai’s curiosity about fish – that their natural habitats could be contained in a tank, that their lives are “a soap opera” with creatures that are so different from humans.

Fast forward to today and Gerlai, now a professor in the department of psychology at the University of Toronto Mississauga, is still thinking about fish – only now he’s using them to better understand humans and how their brains work.

“I wanted to go deeper, to the molecular level, to be more mechanistic – understanding how things work in the brain, how genes influence behaviour, what bio-chemical reactions occur during learning and memory, for example,” he says.

In particular, Gerlai uses zebrafish to study memory, social behaviour and alcohol-induced behavioural changes. The tiny freshwater fish from India and Nepal develop into fully functional, free-swimming fish in mere days and exhibit many cognitive features similar to humans – including learning and memory. Composed of two aquaculture specialists, a post-doctoral researcher, four graduate students, 13 independent project students and thousands of zebrafish – at different stages of growth – Gerlai’s lab has published nearly 300 papers that have been cited at least 12,000 times over the last 15 years. Gerlai says his research represented uncharted territory for the neuroscience field when the lab was first established.

“Not a lot of people focused on the behavioural aspect of brain function,” he says. “It was a gigantic miss by zebrafish researchers … A lot of neuroscientists have been using really complicated techniques to understand how the brain works, but none of that matters if you don’t know what the output of the brain is going to be.”

Gerlai’s body of work, as well as his academic leadership, was recently recognized by the International Behavioral Neuroscience Society (IBNS). The IBNS, which has membership in 34 countries and consists of scientists, clinicians and teachers, awarded Gerlai its Outstanding Achievement Award for his professional achievement and longstanding contributions to the society.

Gerlai formally received the honour at the society’s annual meeting in June, where he gave a lecture that discussed the zebrafish’s spatial abilities and how they could contribute to a better understanding of learning and memory in humans.

Gerlai says he was humbled by the award and praised his students – graduate and undergraduate, past and present – who have helped with the research.

“I’m the one who often discusses what needs to be done – how to design an experiment, how to collect data and what experimental procedures we should choose – but it is really the students [who do the work],” he says.

While his lab seeks to answer fundamental questions about the brain, Gerlai hopes his research will also translate into real-world medical applications. That includes addressing the effects of alcohol on brain function – a line of inquiry that has taken Gerlai full circle from his six-year-old self.

By adding small amounts of alcohol to the fish tanks, the lab looks at the drug’s long-term chronic effects, including in embryonic fish. “We found even a small amount of alcohol could lead to a lifelong alteration in brain function behaviour in these fish,” he says.

Publishing several studies on the subject in the last few years, Gerlai and his lab are continuing to deconstruct the effects of alcohol – a substance he describes as “extremely complicated.”

Medical applications of Gerlai’s work are still years away. But he says he’s nevertheless content with doing basic science that opens doors for others to address more complicated questions.

“I don’t like dreaming – I want to be realistic,” says Gerlai. “I have questions that I know cannot [yet] be answered.”