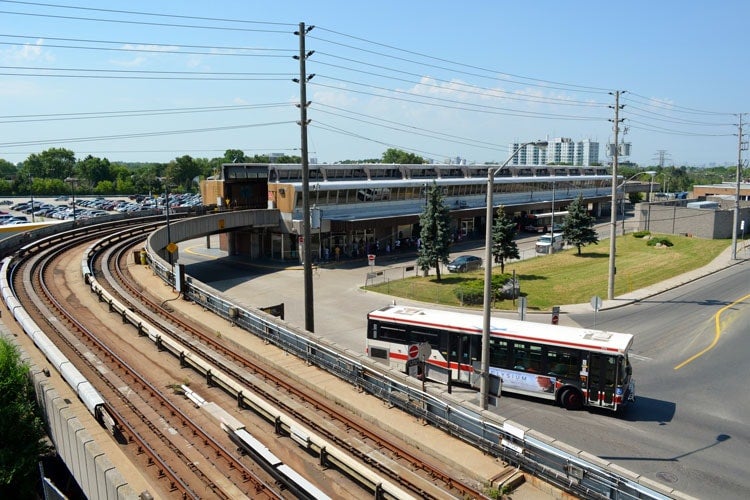 Scarborough community, business and academic leaders have written to Toronto city council with their concerns over transit (Photo by Alex Consiglio/Getty)

Shelley Romoff spoke to U of T Vice President and U of T Scarborough Principal Bruce Kidd about the proposal and about steps taken by community leaders to address the issue.

Five public sector leaders in Scarborough have gotten together and taken the step of writing an open letter to the Mayor and City councillors about transit. What prompted this?

It’s simple. Almost one in every five Torontonians – 24 per cent of the population, over 625,000 people - lives in Scarborough. Yet transit in this area of the city is woefully inadequate, and Scarborough has been repeatedly overlooked when it comes to transit investment. This has negatively impacted development – scaring developers off of some projects and even spoiling the chance others could even be considered. Residents are frustrated. As leaders of the four of the largest public institutions in the east end of Toronto – institutions that serve over a half million people, Robert Biron (The Scarborough Hospital), Ann Buller (Centennial College), Andrée Robichaud (Rouge Valley Health System), and I, as well as Margaret Middleton (Scarborough Business Association) who represents the business community, agree that we have an obligation to speak up. As we say in our letter, the challenge faced by residents, businesses and institutions in this part of the city is urgent.

What does Scarborough need when it comes to mass transit and pubic transit?

First, we need to all understand that the debate – which has been going on for much longer than just the last few years – is divisive as well as time-consuming.  There have been several different plans presented over the past decade. While each has merit, the un-ending discussion is affecting Scarborough’s, and Toronto’s, future.

We need comprehensive transit planning for the future. We need predictability, and results. We need to bring back confidence to planners, developers and to taxpayers.

Connecting Scarborough Town Centre to the subway makes good sense. This will create an express line to help people move to and from the downtown core to what is already an important multi-regional transit hub.

Exending the Eglinton LRT much farther east makes good sense, too. This will enormously benefit those who live in Scarborough and move around the area, and ultimately, reduce vehicular traffic.

What outcome will, in your view, present a way forward?

There is a cost to lost opportunity as well as a cost to implementing plans – it’s just hard or harder to measure. We can’t afford to keep stalling. Even though financial requirements for comprehensive transit plans may exceed what we can afford today, we still need innovative, creative planning or the future that can be implemented over a period of time.

Let’s approve and allocate funds for a comprehensive approach to transit planning for Scarborough, one that includes completing the Transit Project Assessment Process for the subway and the LRT networks.

Let’s move forward. These plans will finally allow both the public and the private sectors to have assurance about how Scarborough will develop, thrive and contribute to a better, modern Toronto.

Kidd also spoke to U of T News reporter Romi Levine. She asked him how UTSC and its students are affected in particular:

How will transit expansion benefit the student population at UTSC?

The leaders of the SCSU (Scarborough Campus Students’ Union) over and over again have stood with us shoulder to shoulder on transit.

In what ways can the campus grow with better transit?

There’s the vision of growth for our campus – we have a campus master plan that looks ahead over the next 20-30 years to build out the precinct of UTSC to fill in the campus between the traditional campus south of Ellesmere and the new buildings on the north of Ellesmere.

Will better transit strengthen ties between UTSC and the Scarborough community?

Will better transit links to UTSC create better connectivity between U of T campuses?

Oh come on, for sure! One of the barriers to bringing people out here, one of the barriers to moving students downtown is inadequate transportation. The SCSU lobbies every day and every week for strengthened transit links to downtown… so this will make that a lot easier, a lot more convenient. It will enable students on both St. George and UTSC to make better use of the richness of both campuses.

Read more about Principal Bruce Kidd’s perspective on transit for Scarborough in Intervals: the Principal’s blog.