Siemiatycki: proposed stop at UTSC “has the potential to really change the way the campus functions” 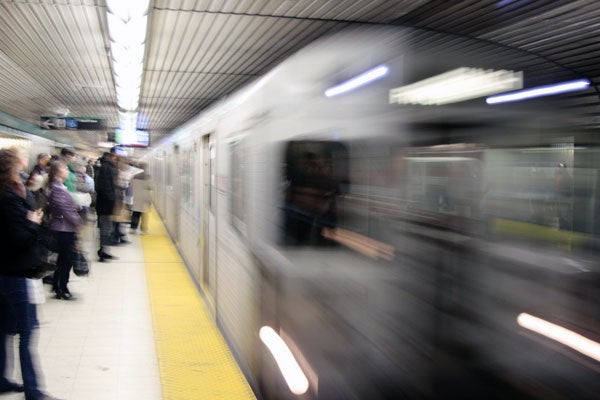 “Students are commuting extremely long distances and we know that their academic experience is shaped by their ability to reach campus,” Siemiatycki says (photo by Jason Krygier-Baum)

The new transit plan that includes a stop at the University of Toronto Scarborough will be a major “boon for future students” Associate Professor Matti Siemiatycki says.

The long commutes today’s students must endure to get to school negatively affect their academic experience, the expert in municipal infrastructure says.

Siemiatycki, who teaches in the department of geography and planning, helped design an unprecedented survey of the transit needs of Toronto university students. The results will be released in a few weeks.

Read more about the StudentMoveTO survey

On Jan. 21 the City of Toronto planning department released a report that proposes a 17-station Eglinton Crosstown LRT which includes the first direct rapid transit connection to UTSC. The plan would also eliminate two of the three stations on the extension of the Bloor-Danforth subway, leaving just one stop at the Scarborough Town Centre. Mayor John Tory and most of his council colleagues approve of the plan.

“I think providing students with rapid transit could have a real, positive impact on the university and the priority neighbourhoods that the LRT line will also serve,” Siemiatrycki said in an interview with U of T News.

The stop at UTSC “has the potential to really change the way the campus functions and the way students use that campus and interact with the university,” he said.

“Students are commuting extremely long distances and we know that their academic experience is shaped by their ability to reach campus. Often their course options are based on their transit options. Transit also has an impact on their extra-curricular activities on campus.”

The challenges students face “show how important transit is to students in the whole region,” Siemiatycki said.  The new stop “could clearly be a boon for future students and could be great for the university as well.”

All the urban planners agreed that the new Scarborough transit proposal is an “evidence-based” plan, something not seen in Toronto in 40 years because all decisions were so politically oriented. President Meric Gertler has described the plan the same way.

In the interview with U of T News, Siemiatycki cautioned that much more evidence needs to be gathered before any final decisions can be made on the Scarborough extensions. Keesmaat gave a ballpark figure of $3.6 billion as the cost of the plan.

City Council had originally voted for a three-stop subway and the new proposal “is still a bit of a political compromise,” Siemiatycki said. “I would like to see three things happen – a ridership study, a real cost estimate and a study on the land-use development.”

For example, Siemiatycki said, he would like to “see a real comparison” between the cost of a subway to the Scarborough Town Centre (which involves tunnelling) and light rail transit. He believes the existing Scarborough LRT, now “practically a rickety, amusement park ride,” could be refurbished at a much lower cost.

There is a lot of potential in refurbishing the LRT, he said, because it could run automatically without drivers which would mean less time to wait between trains. It would modeled after Vancouver’s Skytrain.

During the panel discussion on The Agenda, Palvetzian and Burda were asked which should take priority, the Scarborough plan or a downtown relief line. There was no time left for Siemiatycki to answer.

In the U of T News interview, Siemiatycki said “I would like to see the evidence on that one [the Yonge line]. We are a ways off with regard to the technical planning on that line.”

Both should be examined from a regional perspective, he suggested, pointing out that allocating money for one project could mean less money for others because of the limited resources governments have. That is why it is so important to base decisions on evidence, he said.

“We’ve heard a lot about who deserves public transit and I think Scarborough deserves transit. They deserve transit that will serve that community and make it well connected. And that includes UTSC.”