Recalling the Samsung Galaxy Note 7: U of T expert explains the blow to Korean society 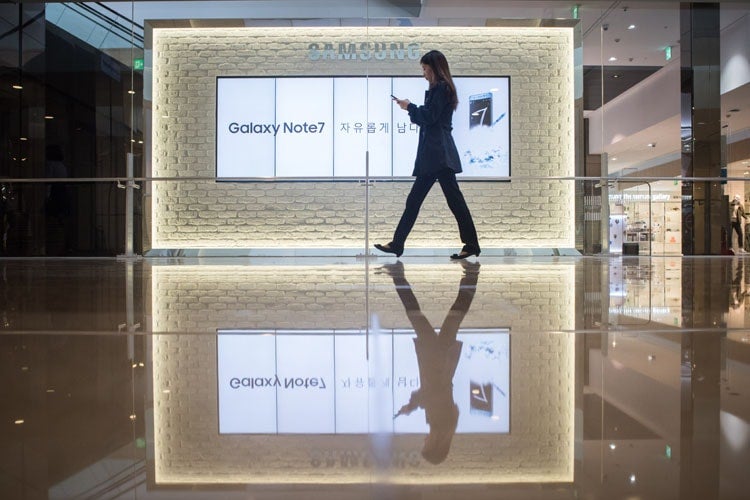 When Samsung announced earlier this month that it was stopping production of its flagship smartphone, the Galaxy Note 7, and recalling all existing phones, the jolt was felt around the world. But in South Korea, where Samsung is the largest conglomerate or “chaebol” in the country, controlling everything from chemicals to electronics, health care and life insurance, there's a lot more at stake.

Tina Park is a PhD candidate in the department of history at the University of Toronto, focusing on the transformation of Canadian-Korean relations & history of globalization.

She spoke to U of T News about Samsung and the role of the chaebols in Korean society.

What is the chaebol system?

The “chaebol” refers to conglomerates that dominate South Korea’s economy. The word “chae” means “wealth” and “bol” means “clan” in Korean. In South Korean culture, the chaebols are like dynasties. Over the years, the descendants of the founders have retained control of the management of these companies, and the families have remained very wealthy. Among the largest chaebols are Samsung, LG, Hyundai, and SK Group, but there are dozens of others. These conglomerates are also very powerful in how much control they exercise in the South Korean economy – in the early 21st century, the chaebols produced roughly two-thirds of South Korea’s total exports and attracted a large part of the country’s foreign capital inflow. Last year, Samsung Group alone accounted for roughly 20 per cent of South Korea’s $527 billion in exports.

The chaebol structure originated in the 1960s. In the aftermath of the Korean War, the South Korean economy was impoverished, with the national GDP per capita at around US$67. When Park seized power in 1961, the South Korean government adopted an export-led industrial policy that favoured and strongly supported chaebols, such as guaranteed loans from the banking sector, protection from competition, and other legal and institutional mechanisms, which enabled them to take big risks, especially in the heavy and chemical industrialization industry in the '70s. In addition to heavy exports, these companies invested very heavily in R&D, recruited the best of South Korea’s brains and quickly emerged as competitive players in the international market. The close collaboration between the state and the chaebol was instrumental for South Korea’s economic miracle. South Korea today has the world’s 13th largest national GDP. From Koreans selling Samsung radios to Canadians in the 1970s, bilateral trade between South Korea and Canada has grown exponentially by about 3,000 times to where we are today.

How influential are companies such as Samsung in the Korean economy?

The chaebols are hugely influential in the South Korean economy because often one company would have subsidiaries in many different areas, such as electronics, food, amusement parks, hotels, semiconductors, etc. It is entirely possible for an average Korean to be born in a Samsung hospital, buy groceries from CJ &Foods, ride a Hyundai car, work for LG electronics and enjoy shopping at Lotte department store. So within South Korea, it is impossible to escape the chaebol influence.

What about their cultural influence?

In addition to their economic dominance, these conglomerates and their brands serve as a source of pride for many Koreans, both domestically and internationally. Purchasing South Korean brands is considered as an act of patriotism by many Koreans in the diaspora community, in addition to whatever economic or technological value they carry. Many young South Korean students dream of working for one of the big chaebol companies and undergo intense preparation, not only because the job market is very competitive and these jobs pay well, but also because of the social status they symbolize. A “Samsung man” for instance would appear more attractive to Korean women looking for a potential husband because it would imply that he is a well-educated and successful man with stable future. The chaebols are heavy spenders in R&D, various educational programs, the entertainment industry, and even the health care and social welfare sectors, so the latest Hallyu (Korean) wave cannot be fully understood without realizing the capital behind it. South Korea is still a very hierarchical society, so the prevalence of chaebol culture perpetuates the best and worst of capitalism. Chaebols now influence how people relate to each other, the latest trends and even the value system.

Do they have an effect on the political system?

Absolutely. Since the 60s, the chaebols have always had strong collaboration with South Korea’s political leaders and with a cult of personality associated with the founders of chaebol like Lee Kun-Hee, the chairman of Samsung Group. Concerns have been raised about corruption and bribery between the chaebol and leading politicians, and public opinion on the chaebols have tended to fluctuate a lot in the recent past. There is a certain sense of resentment at the concentration of so much wealth and political influence in the hands of leading families. Some would also argue that the dominance of chaebol culture creates an unfair playing field for small- and medium-sized enterprises, and women are still not seen very frequently in top leadership positions.

Are there any signs of the chaebol system weakening or changing?

To be sure, the chaebols are often under a lot of fire and are frequently scrutinized, but they have been slow to change for a number of reasons. First, these conglomerates have proven to be very resilient and made significant contributions to the South Korean economy.

The prevalence of the chaebols in South Korea makes it difficult for any quick change. Millions of South Koreans are involved with the chaebols, either as employees, customers or even competitors. The highly educated, extremely productive workforce, coupled with South Korea’s strong social cohesion, have all contributed to the survival of chaebols. Samsung Electronics, for instance, has long been seen as one the most technologically and commercially progressive players in the international market, largely thanks to its human capital. There are generational changes within chaebol families and a growing number of small- and medium-sized enterprises are entering the competition, but I think it will take quite a while for the chaebol system to change in any meaningful way.

Will Samsung’s setback with regard to the Galaxy Note 7 have a long-term effect on the company and its position in Korean society/economy?

The latest crisis with Samsung Galaxy Note 7 has been very unfortunate. In the quest for making things “faster, better and cheaper,” Samsung has jeopardized the safety of its customers and has not been efficient in providing solutions. South Korean customers, who have generally been very loyal to the Galaxy Android phones, are expressing frustrations about the lack of clarity on the return policy and lack of proper compensation. The full consequences of the Note 7 crisis remain to be seen in the coming years in terms of brand credibility, sales of future models and general safety issues surrounding smartphones. Samsung Electronic is the biggest subsidiary of Samsung Group, and the investors have already shaved off roughly $20 billion in Samsung’s market value. The recall will cost at least $5 billion or more and most surely affect Samsung’s market share in the smartphone industry. How quickly Samsung adopts the “lessons learned” from the Note 7 crisis will be the real test for this tech giant.