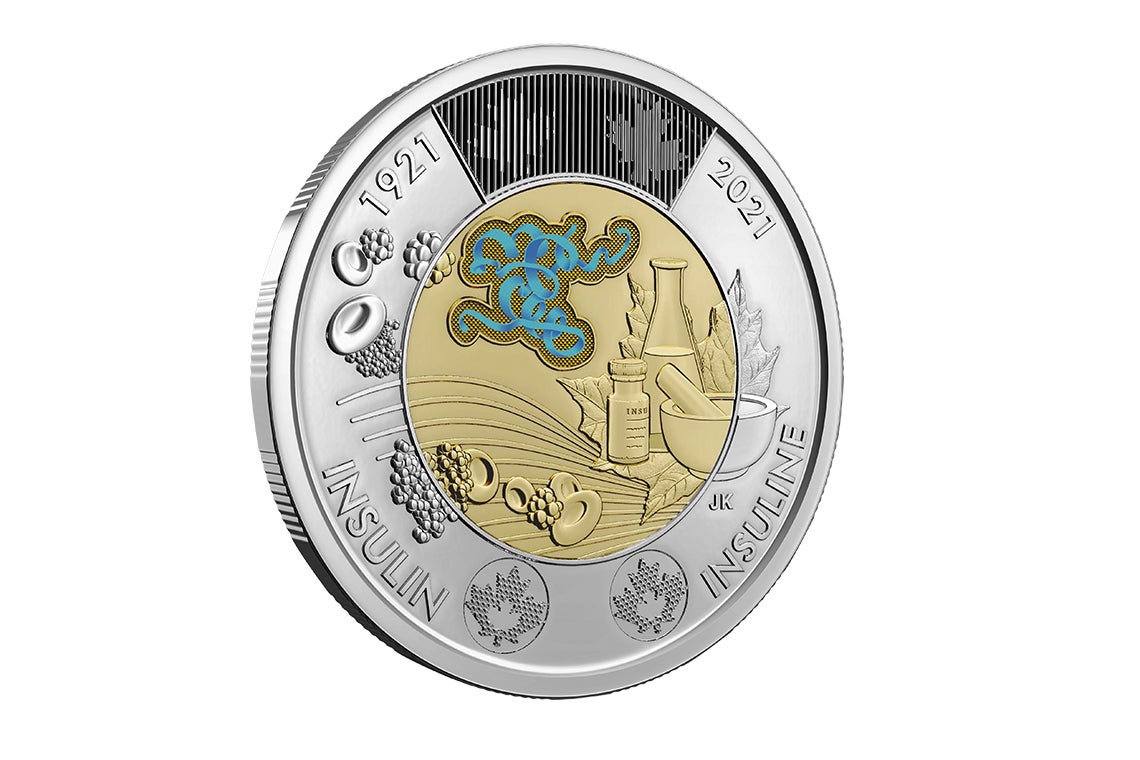 The Royal Canadian Mint has released a new two-dollar coin commemorating the discovery of insulin 100 years ago by scientists at the University of Toronto.

The coin features a monomer, a building block of the insulin molecule, as well as red blood cells, glucose, insulin cells and the scientific instruments – vial, mortar and pestle, Erlenmeyer flask – used in the early formulation of insulin.

“The Nobel Prize-winning Canadian discovery of insulin in 1921 is one of the 20th century’s most celebrated medical discoveries, which has saved millions of lives in Canada and around the world,” Chrystia Freeland, Canada’s deputy prime minister and minister of finance, said in a statement.

Scientists Frederick Banting, Charles Best, J.J.R. Macleod and James Collip worked together to isolate and purify insulin in a U of T laboratory. Isolation of the hormone transformed medical outcomes and dramatically improved the quality of life for diabetes patients, who were previously debilitated by the disease.

U of T is celebrating the 100th anniversary of the discovery this year with a slate of events. The university hosted an Insulin100 Scientific Symposium that brought together the world’s leading diabetes researchers and the Thomas Fisher Rare Book Library mounted an online exhibition that highlights its collection of original documents relating to the history of insulin research.

U of T staff and faculty also contributed to the creation of a commemorative stamp and a Heritage Minute paying tribute to the anniversary.

The Royal Canadian Mint has issued two million coins with the insulin design in colour and another million without colour. The coins were designed by Jesse Koreck, an artist from Waterloo, Ont.

“This commemorative circulation coin is a heartfelt and enduring ‘thank you’ to the talented researchers behind a Canadian breakthrough that has saved millions of lives over the last 100 years, and continues to do so today,” Royal Canadian Mint President and CEO Marie Lemay said in a statement.

Read more about the discovery of insulin at U of T