Robert (Bob) Garrison: For 40 years at U of T, he studied – and explained – the stars 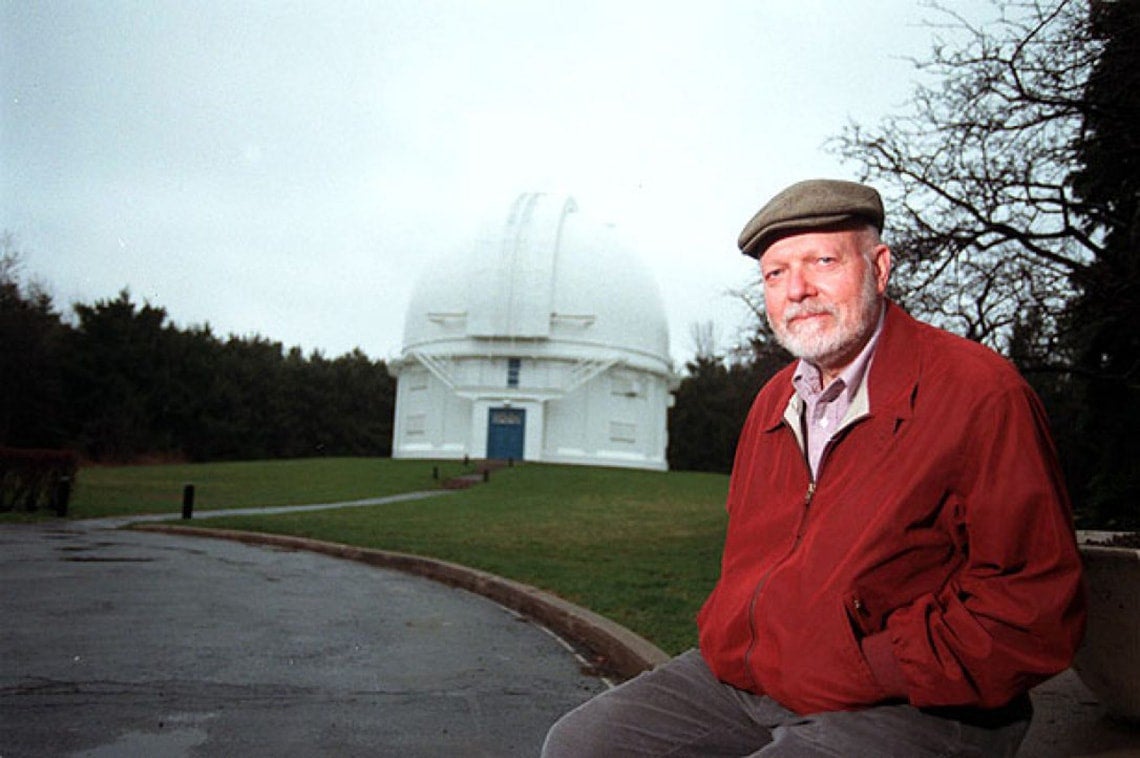 Robert Garrison's work focused on star classification and spectral analysis, with one of his breakthroughs being the discovery of a pure helium star (photos courtesy of U of T's Department of Astronomy & Astrophysics and the Garrison family)

Robert (Bob) Frederick Garrison was a gifted astronomer who was also a masterful spokesman for his discipline, opening up the splendours of the heavens to non-scientists in Canada and abroad. His infectious enthusiasm for the stars was transmitted not just to undergraduates and graduate students, but to the community at large.

Garrison, who died in August of this year, was a long-time professor in the University of Toronto's department of astronomy and astrophysics. His focus was on star classification and spectral analysis, the study of the radiation given off by stars and what characteristics can be gleaned from that data. Among his breakthroughs was the discovery of a pure helium star, and he was the supervisor of astronomer Ian Shelton, who in 1987 detected the brightest supernova observed from Earth in several centuries.

Garrison had a key role as media gatekeeper after Shelton’s discovery of Supernova 1987A generated huge interest worldwide. He arranged public events and answered endless questions from the press. “Bob was soft-spoken but a very good spokesman… and was the perfect liaison for U of T,” Shelton says.

Garrison was comfortable talking to the media about anything to do with astronomy. In 2000, he helped debunk the theory that a cataclysm was pending on May 5. Doomsayers were predicting disaster as Mercury, Venus, Mars and Saturn lined up with the sun, moon and the Earth. "The alignment is a non-event,” he told the Globe and Mail. “The presence of Jupiter doesn't mean a hill of beans. It's happening on the other side of the sun. If it was happening on our side of the sun, it would be beautiful, but it's not.”

Overall, Shelton says, “he made astronomy accessible to the masses without dumbing it down. He did the university a huge service.” Garrison died on Aug. 13 at the age of 81. He leaves his partner Susanna Jacob, children Forest Lee, Alexandra and David Charles, and three grandchildren.

He was born on May 9, 1936, in Aurora, Ill, a western suburb of Chicago. At West Aurora High School he met the woman who would become his first wife, Ada Mighell.

He did a postdoctoral fellowship with the Carnegie Institution in California, working at the historic Mount Wilson and Palomar observatories, before bringing his young family across the continent by car in 1968 to settle in at the University of Toronto, where he would stay for four decades.

Garrison was intent on spreading the joys of astronomy to undergraduates and non-scientists. He enthusiastically taught the popular introductory Astro 101 course for non-science students, where he left them “with a good lasting impression of astronomy and astronomers,” says his long-time departmental colleague John Percy.

In the early 1970s Garrison helped develop and teach an interdisciplinary course called Life on Other Worlds, which examined whether life was possible somewhere else in the universe. “At the time it was kind of New Age-y, but now it is mainstream stuff,” Percy says. The course is still being taught at U of T.

He also explained astronomical issues at public lectures, supported amateur astronomy, and was active in – and served as president of – both the Royal Canadian Institute and the Royal Astronomical Society of Canada.

As a teacher, Garrison guided his graduate students rather than direct them. “He helped us to see things,” says Chris Corbally, an Arizona-based astrophysicist who did a doctorate under Garrison at U of T in the 1970s. “If you needed help he’d give it, otherwise he’d be watching and enjoying you finding things out on your own.”

Garrison generally just gave “pass/fail” grades on graduate courses, rather than specific marks, an unusual practice at the time, Corbally says. “He thought a person should be responsible for the knowledge they gained.”

Garrison’s most gratifying teaching experience, according to his family and colleagues, was the month he spent in 1990 at the Vatican Observatory summer school. About two dozen highly motivated students from around the world attended the annual session at the church-backed facility in Italy. But there was no grading of their work. Garrison was energized by the students’ pure enthusiasm and commitment to astronomy, unencumbered by worries about marks.

Garrison was the driving force behind the construction of a U of T-owned telescope in the mountains of northern Chile. Soon after he joined the university, he led an expedition to the proposed site, then persuaded his department to invest in the project because of its crystal clear view of the skies of the southern hemisphere. He directed the operations there and travelled to Chile frequently. After 26 years of productive research – including the 1987 supernova discovery – the University of Toronto Southern Observatory site closed, but Garrison was determined the telescope would continue its valuable work, so he arranged that it be dismantled and transported to Argentina for use in that country’s astronomical research.

Garrison’s son Lee says his father developed a profound love for Chile during his years running the telescope. “He cared deeply about a country that went through political turmoil while he was there,” Lee says, and was proud to have contributed in a small way to rebuilding its institutions. Lee travelled to Chile with his father both as a teenager and as an adult. “Through his eyes I could definitely appreciate how much he loved it. It was his second home.”

While Garrison was dedicated to his scientific work, he also had many other interests.  He was a keen photographer and used a large format camera to take portraits.  He was an avid canoe tripper, loved the opera, and sang in a choir for years with Susanna.

After being stricken with Parkinson’s disease two decades ago, Garrison offered himself up as a research subject to help expand understanding of the disease. “He wanted to contribute to the scientific knowledge, and he participated in every research study he could get hold of, and engaged the doctors.” Lee says. “He didn’t really rail against the disease, but he figured out how to live with it.”

He also began dancing as part of the therapy. “Dancing was a new thing,” Lee says. “He took that up as both a way to help himself feel better and also as a kind of experiment. He did find after dancing that he always felt a lot better and more stable.”