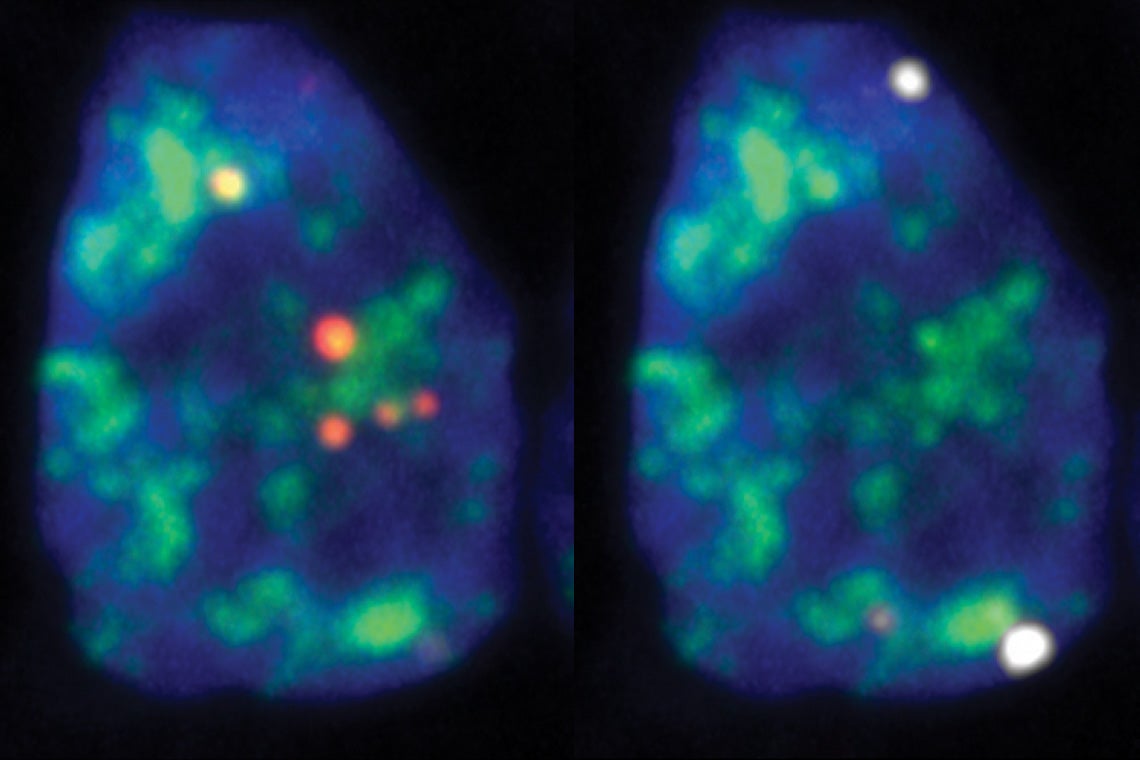 Most people are familiar with the cell nucleus from grade school biology as a storage compartment for DNA. But the nucleus also contains several distinct structures called nuclear bodies or domains – and some of them are brimming with genes’ messages, also known as RNA transcripts.

Scientists are just now beginning to understand these structures, with University of Toronto researchers recently reporting the first large-scale survey of RNA transcripts that are associated with different nuclear bodies in human cells.

The work, published in the journal Molecular Cell, suggests that the structures act as hubs to co-ordinate gene regulation and cell division.

“It was known that some nuclear domains contain RNA, but the composition of that RNA was not systematically probed in previous studies,” said Benjamin Blencowe, senior author on the study and a professor of molecular genetics in the Donnelly Centre for Cellular and Biomolecular Research at the Temerty Faculty of Medicine.

“Our data has shed light not only on the RNA composition of different nuclear domains, but also provides clues as to the functions of some of these domains.”

Until now, the information on nuclear body composition has trickled in piecemeal because there were no methods enabling a systematic survey of RNA localized to these structures. But post-doctoral researcher Rasim Barutcu and graduate student Mingkun Wu realized they could apply a method called APEX-Seq, which had been developed by scientists at Stanford University and the University of California, Berkeley.

APEX is an enzyme that can be fused to any protein of interest and allows labeling of RNAs and other biomolecules in its proximity. The labeled RNAs can then be isolated and identified by sequencing. By fusing APEX to various marker proteins residing in the different nuclear bodies, Barutcu and Wu were able to create RNA maps for each.

The pair collaborated with Ulrich Braunschweig, a senior research associate in Blencowe’s lab, and with the groups of: Anne-Claude Gingras, a senior scientist at the Lunenfeld-Tanenbaum Research Institute, Sinai Health System, and professor of molecular genetics; Philipp Maass, a scientist at The Hospital for Sick Children and assistant professor of molecular genetics; and Robert Weatheritt, a principal investigator at the Garvan Institute of Medical Research in Australia.

The team discovered swaths of novel RNAs – from several hundred to thousands – across the nuclear bodies. Previously, only a handful of transcripts were known to be associated with some of these structures, said Barutcu, whose research was supported by the Banting Postdoctoral Fellowship and a fellowship from the Canadian Institutes of Health Research (CIHR).

One piece of data immediately struck the researchers: The nuclear bodies known as speckles were associated with surprisingly high numbers of RNA transcripts with retained introns – segments that do not code for proteins. When a gene is transcribed into RNA, introns must be spliced out in the nucleus before the transcript can be released into the cell’s interior to serve as a template for making proteins.

The finding led them to realize that speckles are associated with a class of introns with delayed splicing. The nature of the transcripts provided a clue to their function. They were transcribed from genes that control various aspects of gene regulation and the cell division cycle. Genes controlling cell cycle progression must be activated in a timely manner so that their protein products are made only when they are needed. Errors in this process are well known drivers of cancer.

The researchers came up with a model in which the role of the speckles might be to co-ordinate intron removal from transcripts in order to regulate their release from the nucleus, and their subsequent translation into protein factors required for gene regulation and the cell cycle. This mechanism would help ensure a rapid response to cellular signals to make the right kinds of proteins at the right time.

Furthermore, when speckles were disrupted, this altered the splicing of the retained introns, including those located in genes that are directly involved in control of the cell cycle, supporting the idea that the speckles are linked to cell cycle progression.

The model opens up new ways of thinking about cell cycle regulation with implications for cancer research, said Blencowe, who holds a Canada Research Chair in RNA Biology and Genomics and Banbury Chair in Medical Research.

“We’ve uncovered a mechanism involving differential intron retention linked to speckle integrity that could play an important role in not just normal cell division but also how it goes wrong in cancers,” he said, noting that the project was made possible by the now defunct CIHR Foundation grant scheme, which provided long-term research funding.

In addition to the speckles, the team also found large numbers of intron-retained transcripts associated with the nuclear lamina, which forms at the periphery of the nucleus. However, the functional significance of this observation remains unclear.

The researchers said they hope others in the field will take advantage of their datasets and open new avenues of research into nuclear body function where many questions remain.