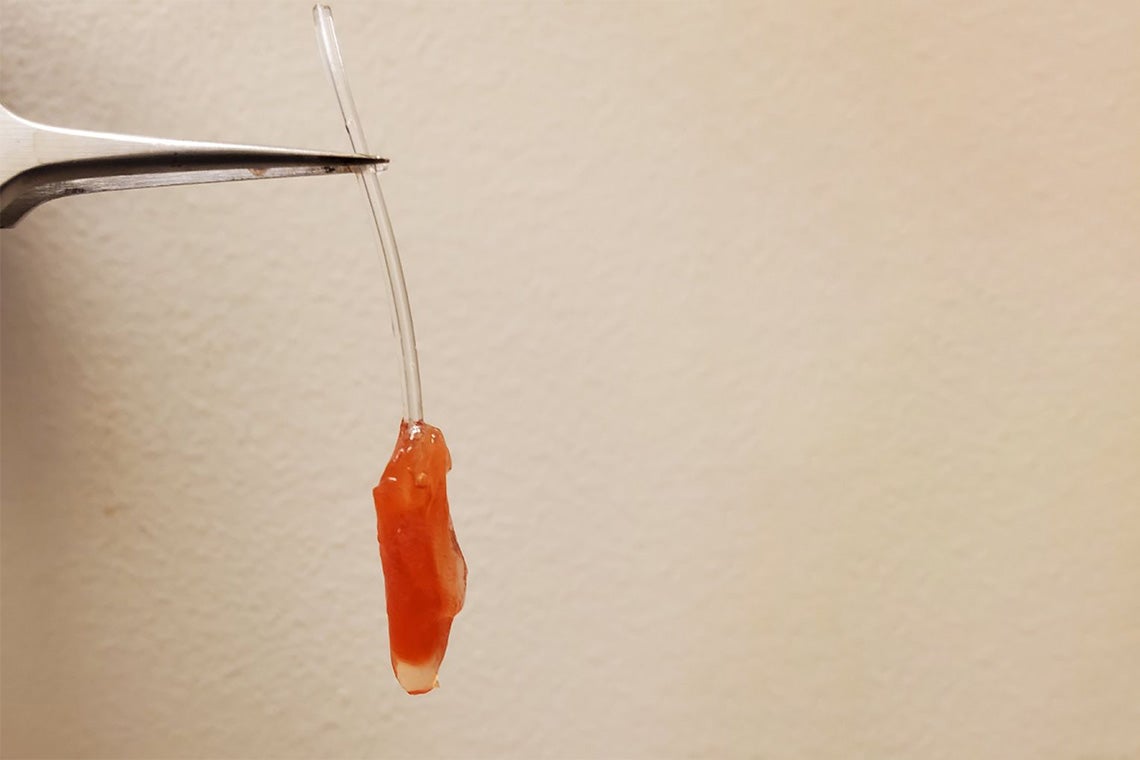 A model heart ventricle, made with real living heart cells and designed at U of T, can be used to study heart disease and test out potential therapies without the need for invasive surgery (photo by Sargol Okhovatian)

University of Toronto researchers in the Faculty of Applied Science & Engineering have grown a small-scale model of a human left heart ventricle in the lab. The bioartificial tissue construct is made with living heart cells and beats strongly enough to pump fluid inside a bioreactor.

In the human heart, the left ventricle is the one that pumps freshly oxygenated blood into the aorta, and from there into the rest of the body. The new lab-grown model could offer researchers a new way to study a wide range of heart diseases and conditions, as well as test potential therapies.

“With our model, we can measure ejection volume – how much fluid gets pushed out each time the ventricle contracts – as well as the pressure of that fluid,” says Sargol Okhovatian, a PhD candidate in the Institute of Biomedical Engineering. “Both of these were nearly impossible to get with previous models.”

Okhovatian and Mohammad Hossein Mohammadi, who graduated from U of T with a master's in chemical and biomedical engineering, are co-lead authors on a new paper in Advanced Biology that describes the model they designed. Their multidisciplinary team was led by Milica Radisic, a professor in the department of chemical engineering and applied chemistry and senior author of the paper.

All three researchers are members of the Centre for Research and Applications in Fluidic Technologies (CRAFT). A unique partnership between Canada’s National Research Council and U of T, CRAFT is home to world-leading experts who design, build and test miniaturized devices to control fluid flow at the micron scale, a field known as microfluidics.

“The unique facilities we have at CRAFT enable us to create sophisticated organ-on-a-chip models like this one,” Radisic says.

“With these models, we can study not only cell function, but tissue function and organ function, all without the need for invasive surgery or animal experimentation. We can also use them to screen large libraries of drug candidate molecules for positive or negative effects.”

Many of the challenges facing tissue engineers relate to geometry: while it’s easy to grow human cells in two dimensions – for example, in a flat petri dish – the results don’t look much like real tissue or organs as they would appear in the human body.

To move into three dimensions, Radisic and her team use tiny scaffolds made from biocompatible polymers. The scaffolds, which are often patterned with grooves or mesh-like structures, are seeded with heart muscle cells and left to grow in a liquid medium.

Over time, the living cells grow together, forming a tissue. The underlying shape or pattern of the scaffold encourages the growing cells to align or stretch in a particular direction. Electrical pulses can even be used to control how fast they beat – a kind of training gym for the heart tissue.

For the bioartificial left ventricle, Okhovatian and Mohammadi created a scaffold shaped like a flat sheet of three mesh-like panels. After seeding the scaffold with cells and allowing them to grow for about a week, the researchers rolled the sheet around a hollow polymer shaft, which they call a mandrel.

The result: a tube composed of three overlapping layers of heart cells that beat in unison, pumping fluid out of the hole at the end. The inner diameter of the tube is 0.5 millimetres and its height is about 1 millimetre, making it the size of the ventricle in a human fetus at about the 19th week of gestation.

“Until now, there have only been a handful of attempts to create a truly 3-D model of a ventricle, as opposed to flat sheets of heart tissue,” says Radisic.

“Virtually all of those have been made with a single layer of cells. But a real heart has many layers, and the cells in each layer are oriented at different angles. When the heart beats, these layers not only contract, they also twist, a bit like how you twist a towel to wring water out of it. This enables the heart to pump more blood than it otherwise would.”

The team was able to replicate this twisting arrangement by patterning each of their three panels with grooves at different angles to each other.

In collaboration with the lab led by Ren-Ke Li, a professor in the Temerty Faculty of Medicine and senior scientist at the Toronto General Research Institute in the University Health Network, they measured the ejection volume and pressure using a conductance catheter, the same tool used to assess these parameters in living patients.

At the moment, the model can only produce a small fraction – less than five per cent – of the ejection pressure that a real heart could, but Okhovatian says that this is to be expected given the scale of the model.

“Our model has three layers, but a real heart would have eleven,” she says.

“We can add more layers, but that makes it hard for oxygen to diffuse through, so the cells in the middle layers start to die. Real hearts have vasculature, or blood vessels, to solve this problem, so we need to find a way to replicate that.”

Okhovatian says that in addition to the vasculature issue, future work will focus on increasing the density of cells in order to increase the ejection volume and pressure. She also wants to find a way to shrink or eventually remove the scaffold, which a real heart wouldn’t have.

Though the proof-of-concept model represents significant progress, there is still a long way to go before fully functional artificial organs are possible.

“We have to remember that it took us millions of years to evolve a structure as complex as the human heart,” Radisic says.

“We’re not going to be able reverse engineer the whole thing in just a few years, but with each incremental improvement, these models become more useful to researchers and clinicians around the world.”

“The dream of every tissue engineer is to grow organs that are fully ready to be transplanted into the human body,” Okhovatian says.

“We are still many years away from that, but I feel like this bioartificial ventricle is an important stepping-stone.”