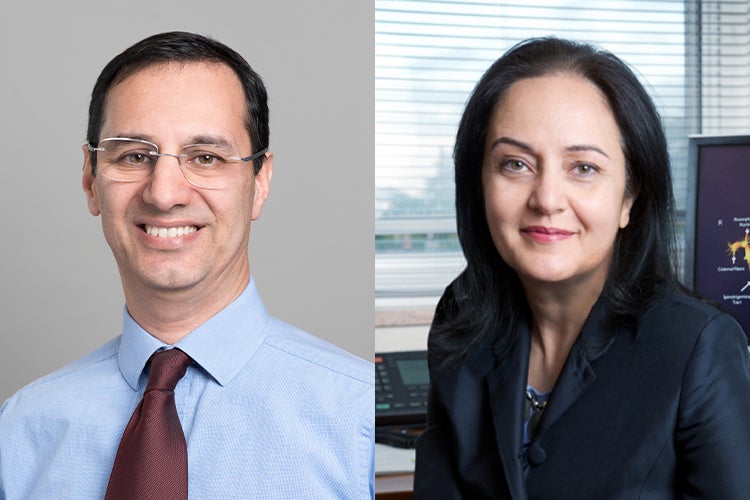 Researchers at the University of Toronto have helped reduce the preparation time needed for Gamma Knife radiosurgery – a process that typically takes hours – to around one minute by using a quantum-inspired technology called the Digital Annealer.

The DA technology was developed through a collaboration between U of T researchers and Fujitsu Laboratories Ltd. It was applied to the Gamma Knife treatment plan by a team led by Ali Sheikholeslami, a professor in the Edward S. Rogers Sr. department of electrical and computer engineering in the Faculty of Applied Science & Engineering, and Mojgan Hodaie, a professor in the department of surgery in the Temerty Faculty of Medicine.

“We were able to translate the treatment planning into a combinatorial optimization problem,” says Sheikholeslami. “By changing the types of variables under certain constraints, by breaking it down into smaller pieces, it could be handled by the DA solver. Before delivery of the dose, the DA treatment plan can be imported into clinical software for verification.”

He says that the plans developed by the Digital Annealer method have proven to be as accurate as those produced through conventional methods.

Gamma Knife radiosurgery, which requires no incision and can be performed without general anesthetic, delivers beams or “blades” of radiation doses aggregated from 192 gamma sources that are aimed at different targets in the patient’s brain. As a stereotactic surgical procedure, it uses medical imaging to locate the positions in advance in order to maximize the area for dosing and minimize damage to surrounding healthy tissue.

Determining the size and shape of the target areas is a labour-intensive procedure. Doctors and radiologists must evaluate the vast number of possible plans by manually inputting parameters and recording the results, using experience as a guide.

This process can take up to several hours, which lengthens a patient’s time in clinical care and limits the number of patients that can be treated in a single day. It also ties up medical personnel that are needed to provide assistance.

Gamma Knife radiosurgery, which delivers beams of radiation doses aimed at different targets in the patient’s brain, requres medical imaging to locate the best positions in advance in order to minimize damage to surrounding healthy tissue – a process that typically takes several hours.

How does the Digital Annealer overcome the hurdle? Its unique architecture emulates quantum behaviour on conventional computer hardware by following a similar process of progressive approximation to arrive at a final result. That, in turn, enables it to make real-time optimization calculations far more quickly than conventional software.

“The Gamma Knife treatment plan is a great example of the DA’s difference-making ability in health care,” says Sheikholeslami. “We envision the DA technology to have a wealth of future applications. As of now, use cases are being pursued in finance, materials discovery, operations research and neural network training.”

Masaya Kibune, director of Fujitsu Consulting (Canada) Inc., says tackling such problems is exactly why the Digital Annealer was developed.

“At present, true quantum computing is still in its infancy,” he says. “There are stability issues, for example, and quantum computers require extreme cold to operate, near zero Kelvin, which demands infrastructure with massive energy costs. The DA takes advantage of similar principles of connectivity and simultaneity at room temperature, and a unit can be easily miniaturized to fit in data centres.”

Fujitsu Laboratories Ltd. launched its collaboration with U of T Engineering in 2018, leading to the establishment of the Fujitsu Co-Creation Research Laboratory at U of T’s Myhal Centre for Engineering Innovation & Entrepreneurship.

Last November, the partnership with Fujitsu was formally extended for three years.

“The Fujitsu Co-Creation Research Lab is a hive of activity for principal investigators, graduate students, postdoctoral fellows and associates,” says Professor Deepa Kundur, chair of the electrical and computer engineering department. “The U of T-Fujitsu collaboration has produced dozens of publications on research topics from memory design to high-speed signaling to optimization. It continues to be a shining example of the benefits of collaboration.”

Sheikholeslami’s connection with Fujitsu goes back to the beginning of his career, when he interned for six weeks at its head office in Kawasaki, Japan.

“For me, it’s been a fruitful relationship for over twenty years now,” he says. “And there’s plenty more to come.”