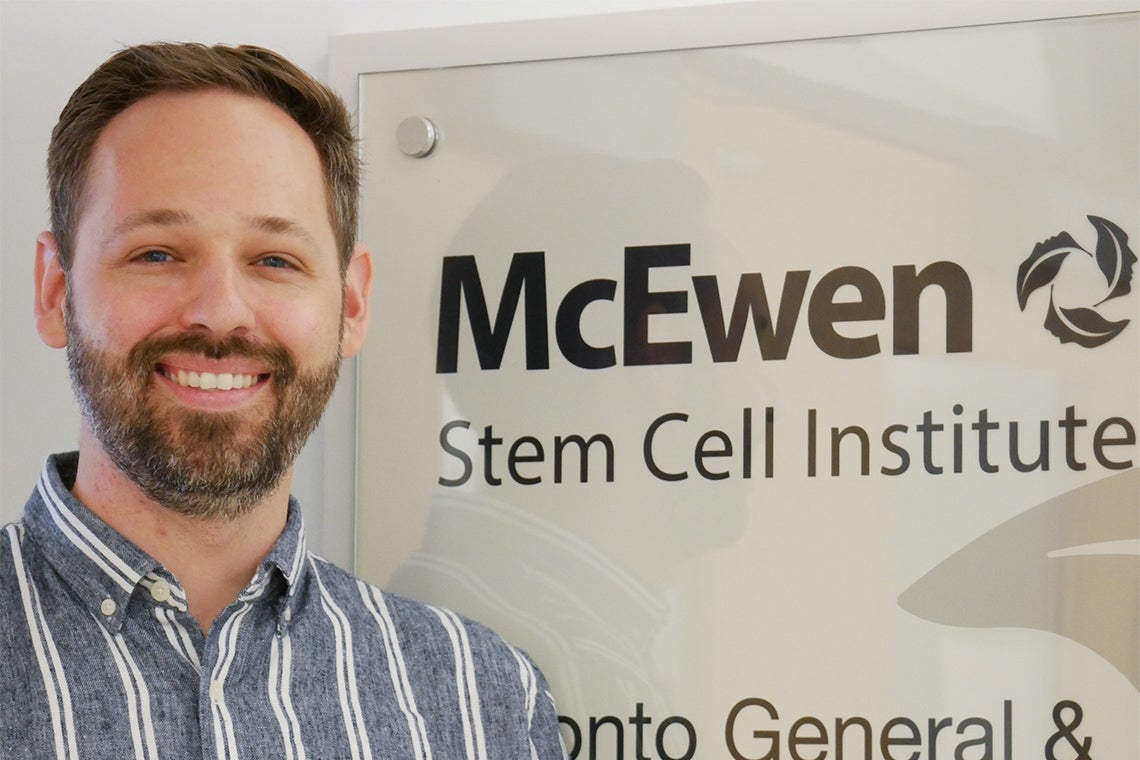 Blair Gage is a post-doctoral researcher at the McEwen Stem Cell Institute at UHN and lead author of the study, which could lead to new therapies to treat hemophilia A (photo courtesy Blair Gage)

An inter-disciplinary team of researchers, funded by the University of Toronto’s Medicine by Design, has generated functional blood vessel cells found in the liver from stem cells – a discovery that offers an opportunity to study the role the cells play in liver development and disease progression, and which could lead to new therapies to treat hemophilia A.

The study, titled “Generation of Functional Liver Sinusoidal Endothelial Cells from Human Pluripotent Stem Cell-Derived Venous Angioblasts,” was published this week in Cell Stem Cell. It represents a collaborative effort between basic and clinical researchers at U of T and the University Health Network (UHN) with expertise in stem cell and computational biology, human liver physiology and function and liver transplantation.

It also draws on previous Medicine by Design-funded research that led to the creation in 2018 of the first single-cell “map” of the human liver.

“By combining insights from developmental biology and liver anatomy with the cell atlas of the human liver, we were able to generate and validate functional human liver vasculature from stem cells,” says Blair Gage, a post-doctoral researcher at the McEwen Stem Cell Institute at UHN and lead author of the study. “Now we can move forward to use these liver endothelial cells to better understand their role in liver function and to develop new therapies to treat disorders such as hemophilia A.”

Researchers in the Keller lab had the goal of generating a functional liver vasculature cell type known as liver sinusoidal cells (LSECs) from human pluripotent stem cells (hPSCs) – cells that can self-renew and have the potential to turn into any other cell type in the human body. LSECs are essential for normal liver function and represent the main source of factor VIII, a blood-clotting protein that is missing or defective in patients with hemophilia A.

However, the team had to demonstrate that the cells they had made in the lab had the same specialized genetic and functional features as those in the human liver. So they turned to the work of MacParland, Bader and McGilvray, who in the first phase of Medicine by Design’s team project funding described a molecular map of the cell types in the adult liver. That research has contributed to the Human Cell Atlas – an international effort to create comprehensive reference maps of all human cells – and last year attracted follow-on funding from the Chan Zuckerberg Initiative.

“This paper uses our human liver map as a guide to know if the cells being generated are the right ones through collaboration with Gary Bader’s group,” says MacParland. “The work really highlights the strength of Medicine by Design in bringing together researchers from multiple institutions to focus on a common goal.”

With Bader and Liu’s help, Keller lab researchers were able to use the MacParland human liver map to show that the hPSC-derived endothelial cells they had generated shared many of the features found in normal liver vasculature. The Keller lab team then brought Innes on board to format the data from the hPSC-derived LSECs for the research community to easily explore the molecular profile of these cells.

This research was supported by Medicine by Design, which receives funding from the federal government’s Canada First Research Excellence Fund and by the Canadian Institutes of Health Research.

The work continues in a current Medicine by Design-funded team project led by Keller that aims to make other key liver cell types and put together the pieces to get functional tissues with the goal of developing new cell-based therapies for liver-related diseases. That project is part of a new $20-million round of team project funding that Medicine by Design announced late last year.

Medicine by Design brings together investigators from different disciplines at U of T and its affiliated hospitals to advance new discoveries in regenerative medicine and accelerate them toward clinical impact. Medicine by Design will host a meeting of the Human Cell Atlas’s Development and Pediatric Atlas in July 2021 in Toronto.