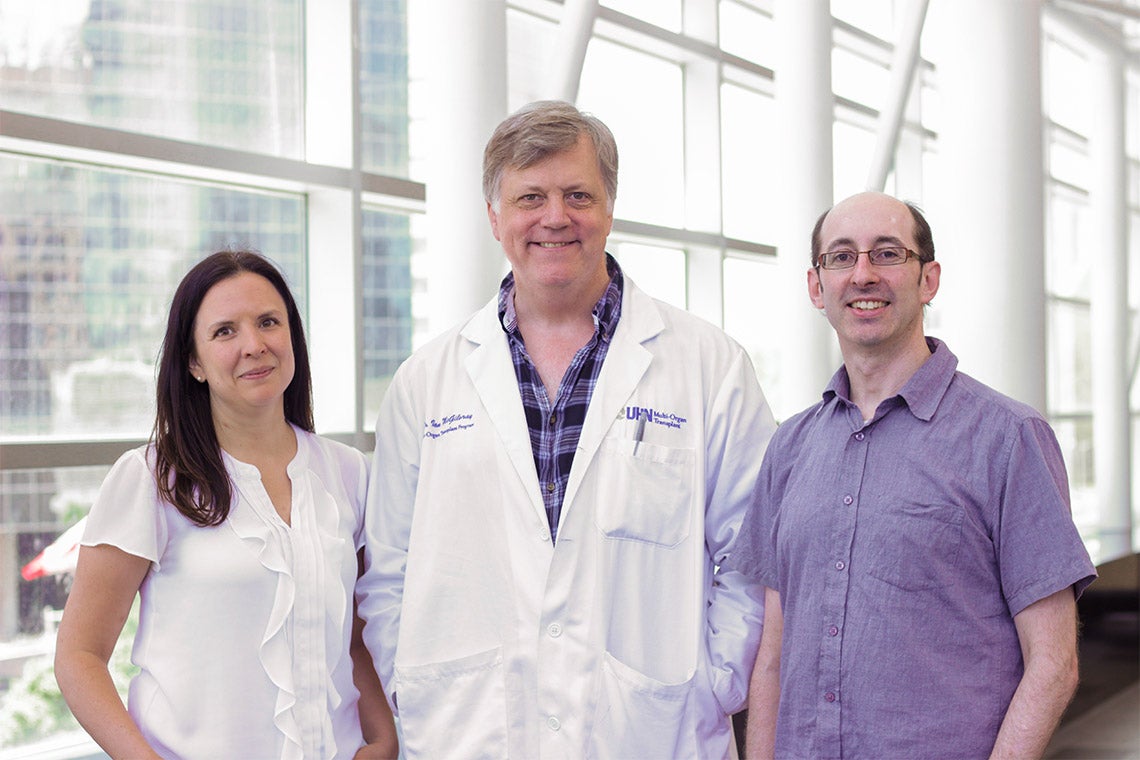 A group of University of Toronto researchers are part of a 19-person international team awarded US$4 million by the Chan Zuckerberg Initiative to advance understanding of the human liver across diverse life stages and genetic backgrounds.

The U of T researchers – all funded through Medicine by Design – published the first single-cell map of the human liver last fall. They are: Gary Bader, a professor and computational biologist at the Donnelly Centre for Cellular and Biomolecular Research; Sonya MacParland, a scientist at the Toronto General Hospital Research Institute (TGHRI) at the University Health Network (UHN) who is also an assistant professor in U of T’s departments of immunology and laboratory medicine and pathobiology; and Ian McGilvray, a senior scientist at TGHRI, a transplant surgeon at UHN and a professor in U of T’s department of surgery.

Part of the Human Cell Atlas, an international effort to map all cells in the human body, the collaboration brings together liver-mapping efforts from around the world to build a more complete picture of the human liver.

“We have been working on building a global team of researchers who are all interested in mapping the human liver in different ways,” said Bader, who is a member of the organizing committee of the Human Cell Atlas.

“This grant from the Chan Zuckerberg Initiative really speeds up the development of the human liver map and allows us to move in novel directions by combining diverse research projects and data into one map.”

The international collaboration, Bader added, is a “direct extension” of the liver mapping work he and his Toronto collaborators have already done with support from Medicine by Design, an interdisciplinary research program at U of T focused on regenerative medicine and cell therapy.

Their project – titled “A Reference Cell Atlas of Human Liver Diversity Over a Lifespan” –  is one of 38 that are sharing US$68 million in funding through the Chan Zuckerberg Initiative’s Seed Networks for the Human Cell Atlas program. Co-founded by Facebook chief executive officer Mark Zuckerberg and pediatrician Priscilla Chan, who is married to Zuckerberg, the Chan Zuckerberg Initiative seeks to harness technology to solve some of the world’s greatest problems and is actively supporting the Human Cell Atlas.

The three-year award is significant because it supports international collaborations that are often ineligible to receive money from country-specific research funders, Bader said. The liver project includes computational biologists, clinicians, engineers and life scientists from Canada, Singapore, Germany, Belgium, the U.K., the U.S. and Israel.

The team will meet in Toronto to kick off the project in late July.

The international nature of the research team means it will have access to samples that better represent the full diversity of human livers, including age, sex and genetics.

“One of the goals of the Human Cell Atlas is to capture human diversity,” Bader said. “We have a specific plan to collect a range of samples to cover a lot of diversity, allowing us to understand the variability in the human liver across the population.”

For the Toronto-led part of the project, Bader, MacParland and McGilvray have joined forces with a new collaborator, Mei Zhen, a senior investigator at the Lunenfeld-Tanenbaum Research Institute at Sinai Health System and a professor in U of T’s department of physiology. Zhen is an expert in volumetric electron microscopy, a technology that captures high-resolution, 3D images by assembling individual images of extremely thin slices of tissue samples. Zhen has been developing this technology for studying neural systems in C. elegans, tiny worms that are part of the nematode family.

This is believed to be the first time the technology will be used to image the liver as part of a tissue map project. Bader said the organ is a good candidate because it is made up of tiny, repeating, hexagonal-shaped structures called lobules.

“Because of the biology of the liver, it is an interesting opportunity to understand the whole organ by studying its individual modules,” Bader said.

The Toronto team plans to link these images with genomics data by applying computational methods and deep learning to analyze the vast amounts of data the project will generate, ultimately creating a unified map.

“Medicine by Design helped catalyze this team, and we are delighted it is taking a leadership role in international efforts to create a next-generation map of the human liver,” said Michael Sefton, the executive director of Medicine by Design, a University Professor at the Institute of Biomaterials and Biomedical Engineering (IBBME) and the Michael E. Charles Professor in the department of chemical engineering and applied chemistry in U of T’s Faculty of Applied Science & Engineering.

“This investment by the Chan Zuckerberg Initiative is an affirmation of the excellence and innovation of their research, and supports the collaborative, interdisciplinary approach that is at the core of Medicine by Design.”

All data, tools and protocols generated from the Chan Zuckerberg Seed Networks for the Human Cell Atlas projects will be freely available to the research community.