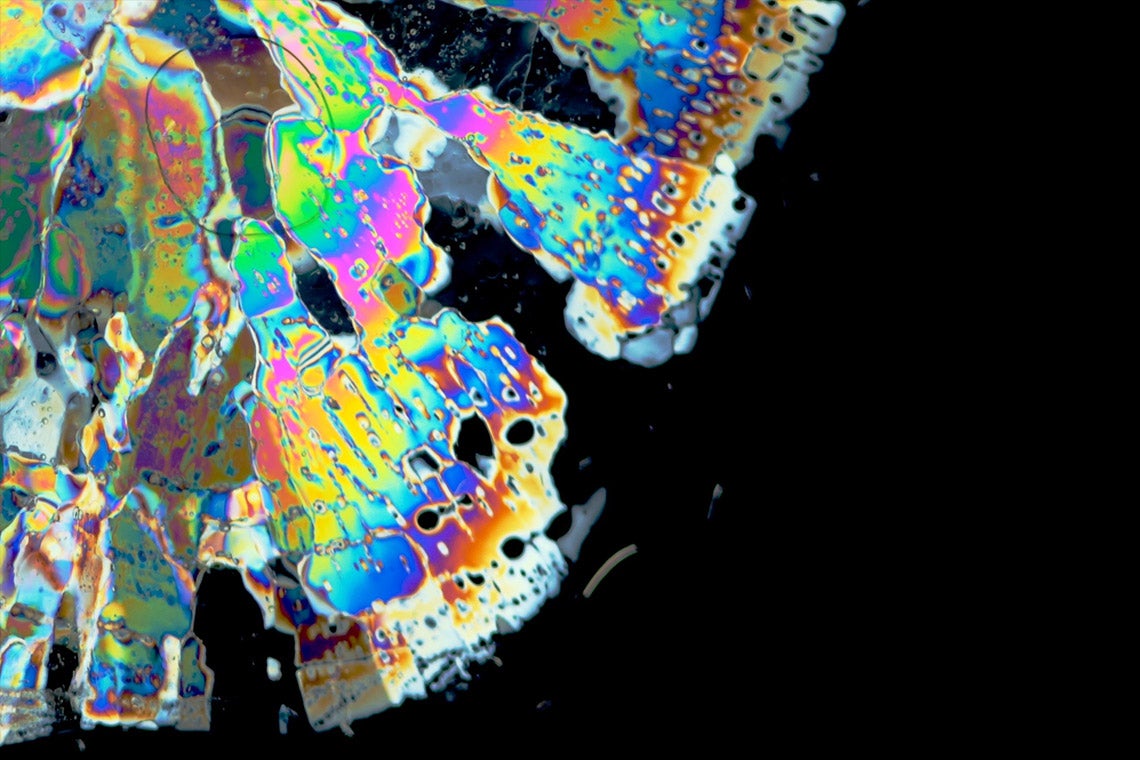 An icicle cross section under polarized light, showing the crystal structure of the ice shot through with dark regions of unfrozen, impure water (all images courtesy of J. Ladan and S. W. Morris)

Experimental physicists at the University of Toronto are closer to understanding why some icicles form with ripples up and down their outsides, while others form with smooth, slick, even surfaces.

By growing icicles from water samples with different contaminants like sodium chloride (salt), dextrose (sugar) and fluorescent dye, the researchers discovered that water impurities become entrapped within icicles as they form and subsequently create chevron patterns that contribute to a ripple effect around their circumferences.

The findings were described in a study published recently in Physical Review E.

A series of icicle cross sections at increasing concentration of salt. In the mid-range, a clear chevron pattern of fogginess is seen that matches up with the surface ripples.

“Previous theories held that the ripples are the result of surface tension effects in the thin film of water that flows over the ice as it forms,” says Stephen Morris, a professor emeritus in the department of physics in the Faculty of Arts & Science and a co-author of the study. “We now see that the ripple formation does not depend on surface tension. It does not even depend only on features external to the ice, but rather is connected to patterns of impurities inside the ice. 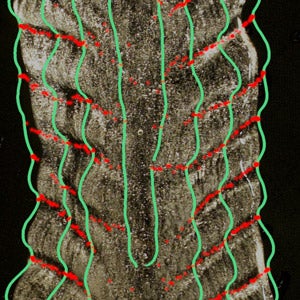 The cross section of an icicle, showing the pattern of internal fogginess, overlaid by edges measured during the growth. The red dots indicate the troughs of ripples.

"The external shape and internal patterns are different aspects of the same – so far unexplained – problem.”

The findings build on an earlier discovery by Morris and his research team that found the presence of salt in water was responsible for the irregular, rippled shapes of icicles grown in the lab. The new results show that it is not the type of impurity that leads to the ripples, but just the fact that there is something foreign in the water.

“We tested various species of impurities and the phenomena are unchanged as long as their concentrations are similar,” says John Ladan, a PhD student working with Morris and lead author of the study. “This is consistent with the idea that only physical, as opposed to chemical, processes are involved.”

While their motivation for unlocking the secret behind the ripples is pure curiosity about natural patterns, the study of ice growth has serious applications, including ice accumulation on airplanes, ships and power lines. However, the results show that existing engineering models of ice accretion on power lines do not account for the entire problem. The researchers note that the findings do not resolve the mechanism of the ripples, but rather just add new aspects to the phenomena to be explained.

“We get a more profound appreciation for the complexity of natural ice formations,” says Morris.

With files from the American Physical Society.