Remembering victims of the Montreal Massacre: U of T commemorates Day of Remembrance & Action on Violence Against Women 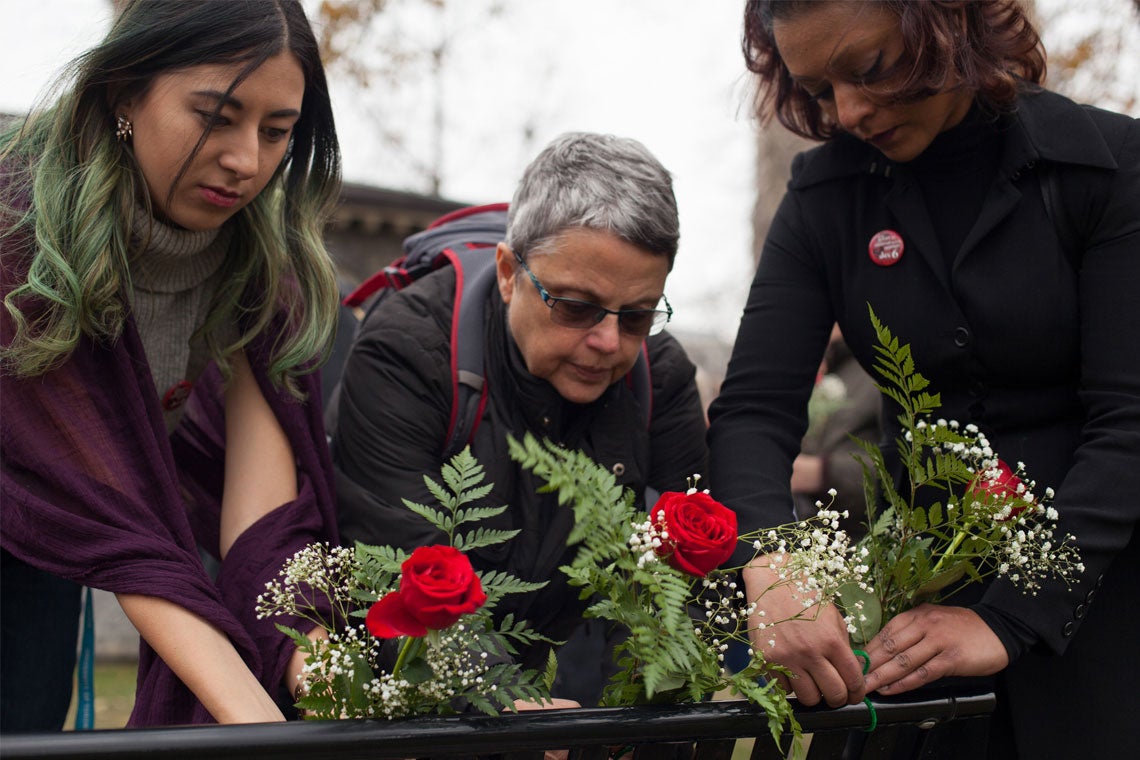 Today, Allen is a professor in the Leslie Dan Faculty of Pharmacy at the University of Toronto. But in 1989 she was a student in her first semester of CEGEP – two academic years between high school and university in Quebec.

Allen had just returned home from school when she heard the news that, in the late afternoon, a man had entered the École Polytechnique in Montreal and proceeded to shoot and kill 14 women and injure 14 more people before turning the gun on himself.

The shooter proclaimed his hatred for feminists, targeting female engineering students for pursuing a career he believed should be occupied exclusively by men.

“The closer you are in terms of your circumstance to something that's going on in someone else's life, the more you feel it,” says Allen. “It was something that stuck with me because I could relate to it at the time.

“They weren't very different in age and circumstance to me.” 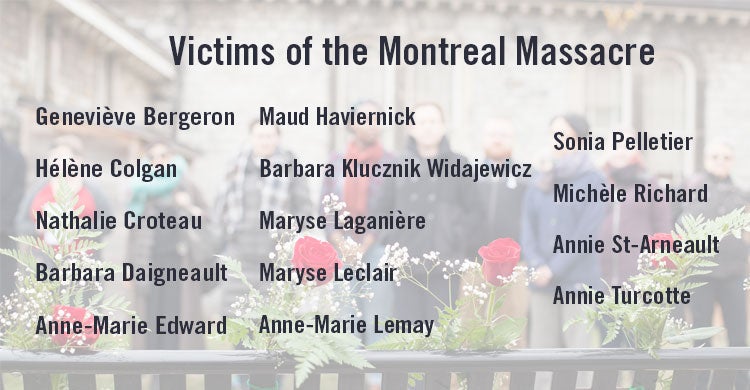 Every year on Dec. 6, people across the country remember the victims of École Polytechnique and raise awareness about gender-based violence.

At U of T, events are taking place across all three campuses for the National Day of Remembrance & Action on Violence Against Women.

Attend an event on your campus

Allen, who was studying science at the time, says the Montreal Massacre, as it came to be known, greatly affected her.

“I felt motivated to pursue the sciences more than anything,” she says.

Allen fights back tears as she explains why it did not make her retreat or give up on her ambitions.

“Here are all these women doing this and it's all gone. We need to go on for them,” she says. “We need to do this now more than ever.

The killer failed to scare women out of the sciences. This year, for example, a record number of female students enrolled in U of T’s Faculty of Applied Science & Engineering.

For the past two years, women have made up 40 per cent of first-year engineers at U of T – the highest proportion in Canada. The number of female engineering faculty members has also doubled in the past decade. 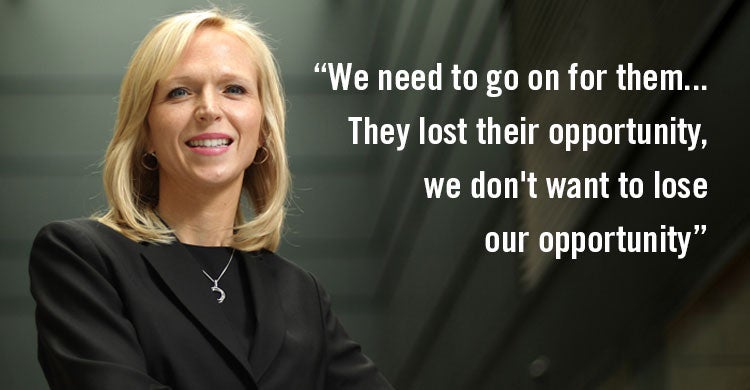 Deepa Kundur, a professor in the department of electrical and computer engineering, says the École Polytechnique shootings drove home the role universities need to play as welcoming and inclusive spaces for everyone.

Kundur was in her first year of engineering at U of T in 1989.

“The university, the educational system is a very special and important place and it’s important to value education, especially in fields like STEM where it provides opportunities for people where diverse backgrounds and opinions are needed very much,” she says.

“For me it became a significant focus and is essentially why I stayed in the university environment.”

While the enrolment numbers indicate a positive direction for women pursuing science disciplines, there are still hurdles for women in the industry. 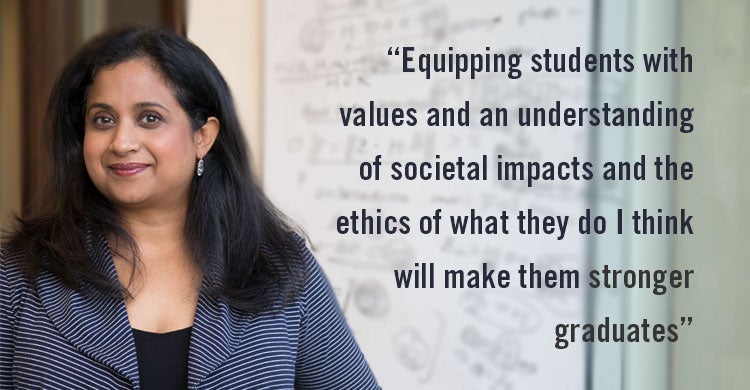 Engineering students Elizabeth White and Julia Filiplic say they are fortunate to have families who encouraged them to pursue a career about which they were passionate.

“I was really lucky in a sense that no one told me I couldn't do it,” says White, who is in her fourth year studying chemical engineering.

But both students say they have female friends and classmates who were discouraged by their families from studying engineering or male-dominated engineering disciplines.

In class, Filiplic says some of her male classmates would dismiss her ideas while White has overheard male students calling a female student “bossy.”

“Some people are afraid of change and are afraid of having new perspectives and being told that their idea of something is maybe a little bit outdated,” says Filiplic, a fourth-year mechanical engineering student. “To be able to go forward and know you're changing things and you have the support of other women and other people – it's exciting and it's better when you know you can do it safely.”

White and a group of engineering students are creating a monument to honour victims of violence against women – this year focusing on missing and murdered Indigenous women. The structure will be on display on King’s College Circle on Dec. 6. 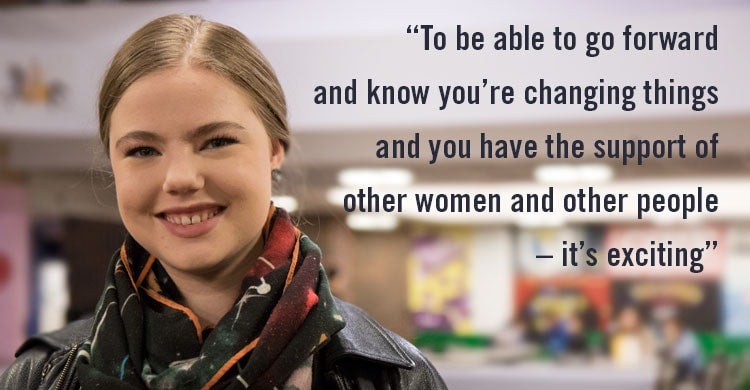 Other events commemorating the Day of Remembrance at U of T include a ceremony at the Great Hall at Hart House on the downtown Toronto campus, a rose vigil at U of T Mississauga and a women’s writing circle at U of T Scarborough.

On Dec. 1, people at U of T Scarborough came together to remember victims of gender-based violence with red roses and with red feathers for missing and murdered Indigenous women. 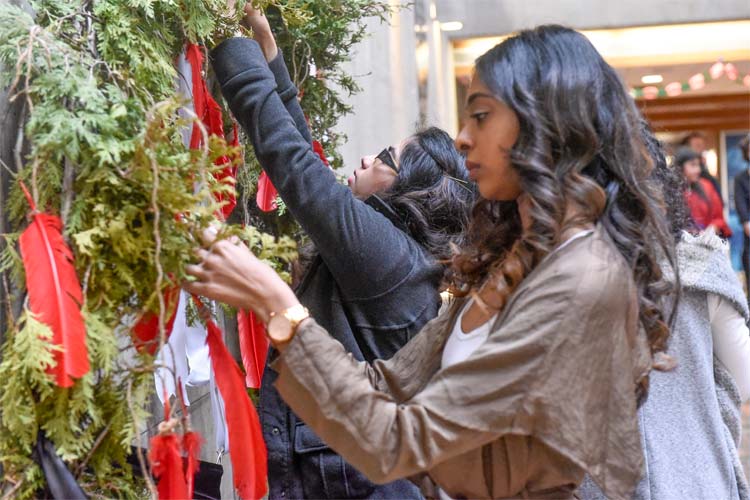 Today, the Rotman School of Management is hosting a discussion about the human rights and economic issues around gender-based violence, with Mary Eberts, the co-founder of the Women’s Legal Education and Action Fund and a former constitutional litigator-in-residence at U of T’s Faculty of Law, and Sarah Kaplan, professor and director of the Institute for Gender and the Economy at Rotman.

Register for the discussion at Rotman

Women not only suffer the trauma of the violence but are also burdened by the financial cost of the abuse, says Kaplan.

“There is the potential loss of work, time out of work, loss of income, and if they have any kind of PTSD, then not just short-term loss of income but loss of ability to earn a living,” she says.

Gender-based violence also takes a toll on the Canadian economy, with some estimates putting the cost at upwards of $20 billion, says Kaplan.

“This is in lost productivity, paying for the health care, the legal system and all those kinds of things.”

The recent spate of sexual harassment and abuse allegations against prominent men in multiple industries from entertainment to politics also highlights the cost to businesses when incidents are swept under the rug, she says.

“We started planning this event nine months ago and we had no idea how much of these kinds of issues would be coming to the surface,” says Kaplan. “People are looking for more ways to think about it, talk about it and to look for solutions and we hope our event on Dec. 5 will be part of that conversation."

Kundur says she’s glad these kinds of discussions are happening and that people are becoming more open and willing to talk about tough issues.

“Equipping students with values and an understanding of societal impacts and the ethics of what they do I think will make them stronger graduates who will have a greater impact, not just technically but in the larger landscape of things,” she says.

If you or someone you know is a victim of gender-based violence, here are resources available to you near your campus

More resources can be found here