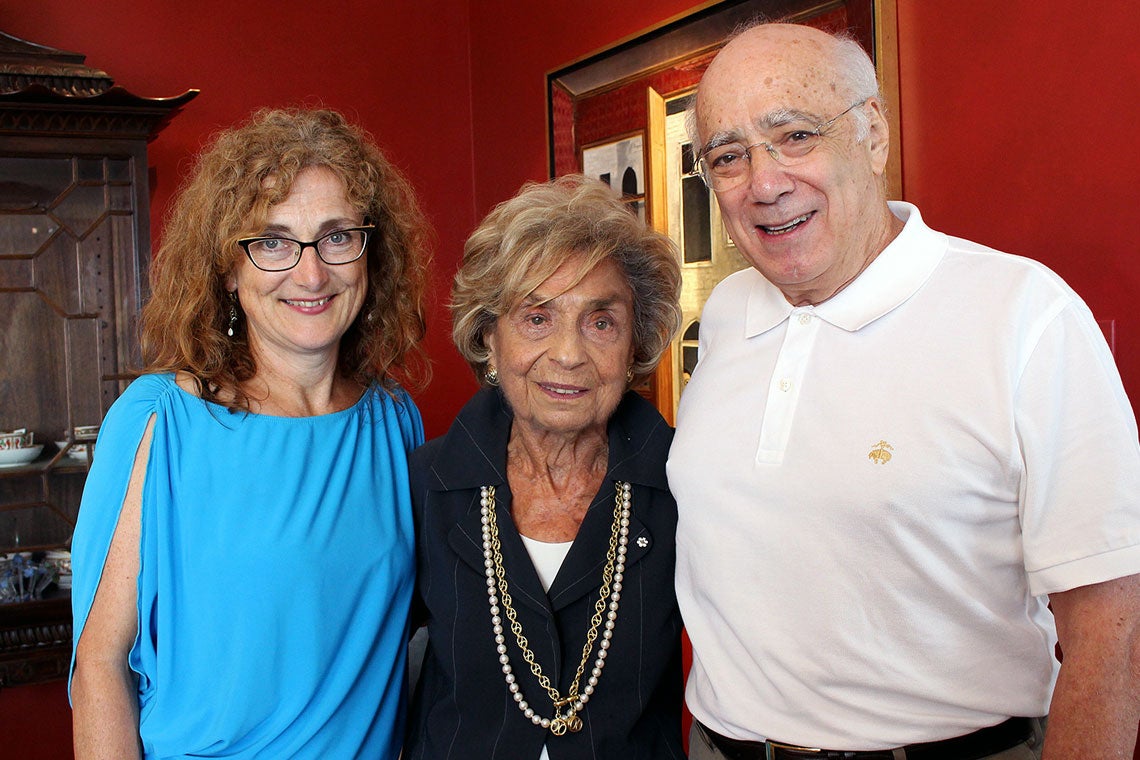 “A beloved champion, a distinguished alumna, and an incredibly warm and generous friend”

University of Toronto Chancellor Emerita Rose Wolfe is being remembered today for her extraordinary leadership, kindness, and her commitment to social justice.

Wolfe, whose contributions to her country were recognized with the Order of Canada, died last week at the age of 100.

“The University of Toronto has lost a beloved champion, a distinguished alumna, and an incredibly warm and generous friend,” President Meric Gertler said. “Through her exemplary service as Chancellor, as a member of our Governing Council, and in an amazing number of volunteer positions, Rose Wolfe has left a magnificent legacy. So many aspects of life at U of T have benefitted from her leadership and dedication, from the experience of commuter students to alumni engagement, from our global academic standing to fundraising and philanthropy.

“She will be greatly missed, but so fondly remembered.”

Funeral services were held on Jan. 2 and the University's flag was lowered to half-mast.

(Below: Wolfe with Avie Bennett and Wendy Cecil) 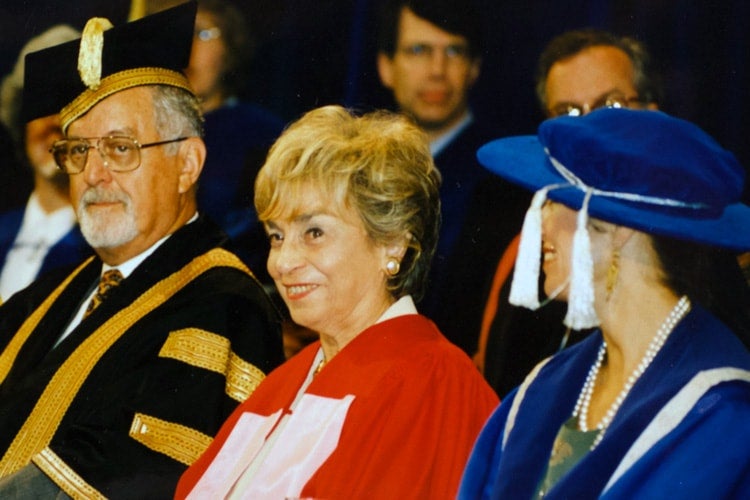 Anna Shternshis, director of the Anne Tanenbaum Centre for Jewish Studies at U of T, told The Toronto Star that Wolfe was a strong advocate for female leadership in academia who was extensively involved in the life of the centre.

“She took a keen interest in our current students, met with them, wanted to know about their concerns and challenges,” Shternshis said. “They trusted her because they sensed her ultimate devotion to their success.”

President Emeritus Rob Prichard, who led the University from 1990 to 2000, described Wolfe, who served as chancellor from 1991 to 1997, as “quite simply the perfect chancellor.”

Wolfe was a “powerful force for good,” Prichard told The Star.

Wolfe was born Rose Senderowitz in Toronto on August 7, 1916. Her parents, Romanian immigrants, were owners of a small bakery in Kensington Market.

Wolfe (BA 1938, Dipl.SW 1939, Hon. LLD 1998) had a long association with U of T, starting as a student in the 1930s, serving on Governing Council in the 1970s and as chancellor in the 1990s. She served on a wide variety of committees and campaigns – including longstanding service on the Factor-Inwentash Faculty of Social Work's Dean Advisory Committee and as Honorary Chair of their Boundless Campaign – attending meetings into the fall of last year. She established the Chancellor Rose and Ray Wolfe Chair in Holocaust Studies, served as a senior fellow and visitor at Massey College and a senior fellow at University College.

In recognition, the University awarded her an honorary degree in 1998, a stained-glass window at Massey College has been named in her honour, and the University of Toronto Alumni Association has established the Rose Wolfe Distinguished Alumni Award.

Wolfe was also known for her work with the Canadian Jewish Congress and the Jewish Family and Child Service – where she helped find homes for Jewish children displaced by World War Two – and with many other organizations.

The 1999 citation for Wolfe's Order of Canada reads:

“She is a defender of social justice, whose extensive and tireless involvement with many boards and committees has made her a dynamic contributor to society.”

(Below: Wolfe with her daughter, Elizabeth Wolfe, and Larry Tanenbaum  at the opening of the Anne Tanenbaum Centre for Jewish Studies) 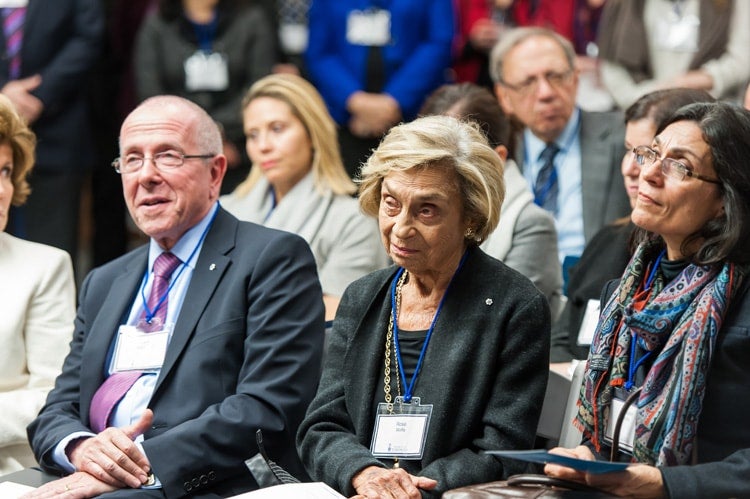 Last summer, U of T News reporter Terry Lavender sat down with Wolfe to talk about her long involvement with the University of Toronto.

When you stepped down as chancellor in 1998, you told The Toronto Star that apart from your family, the University of Toronto was the closest thing to you. Why is U of T so important to you?
The people. I made such friendships over the years in so many different parts of the University, like University College, Massey College, Woodsworth, St. Mike’s College. People like (University College Principal) Donald Ainslie, (Massey College Master) John Fraser, and, of course, Meric Gertler, whom I’ve known for years. It all boils down to the people.

Your parents put you and your three sisters through university in the midst of the Depression. Was that difficult for them?
We never knew how they did it. They had a little bakery and they sold bread for five cents a loaf. Maybe they made half a cent profit on each loaf, so you think of the number of loaves of bread you have to sell to eke out a living. They were both very industrious people. My mother sewed all our clothes. She worked in the bakery, took care of the whole house and took in two of my orphaned cousins. I remember that right in the middle of the Depression, she decided we should move and we ended up in Forest Hill, when Forest Hill had cows in it. We never knew why she decided to move there when most Jewish families moved to Grace Street or Palmerston. It was a mystery.

In the 1970s you joined Governing Council. Was that your first experience with U of T after you graduated in 1938?
Yes. My husband was very close to the Conservative government at the time, and through that connection, I was appointed to Governing Council. Unfortunately, I took on the Governing Council position the same year that I was president of the Canadian Jewish Congress Toronto branch, which was a full-time job. Governing Council kind of got shafted because of that.

How did you come to be appointed chancellor in 1991?
I got a call from Gerry Schwartz (founder and CEO of Onex Corporation). At first I thought he wanted me to be on the committee to choose the next chancellor. I finally got the message that he wanted me to be chancellor. I screamed at the top of my lungs, “No!” I kept saying “No, no, Gerry, just forget it.” But he invited me to breakfast – he had an excellent chef – and when I walked in to his house, there was (U of T President) Rob Prichard, (Governing Council Chair) Bob McGavin and Gerry. They closed the doors. By the time I left Gerry’s place, I had said “yes.” You would have had to be very strong to say no to those men.

(Below: Wolfe with John Black Aird and Pauline McGibbon) 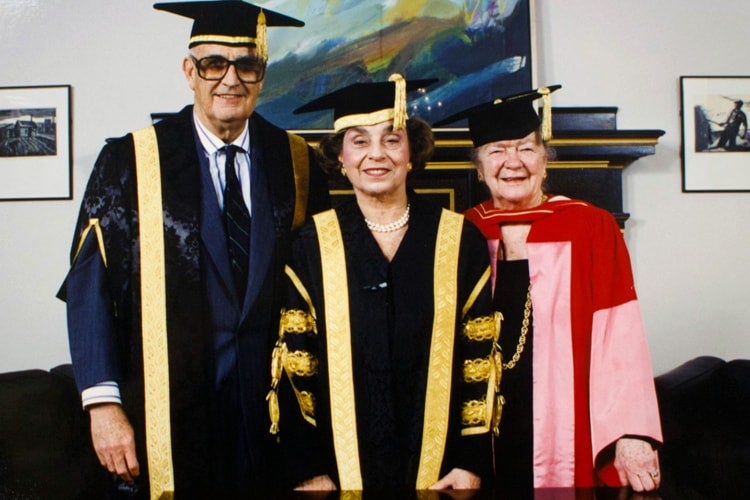 What was it like working with Rob Prichard?
Rob Prichard is the kind of man who throws you into the water and says “swim”. I had a very steep and fast learning curve. Early on, there was the suggestion to establish a Jewish Studies program. I didn’t say anything, but Rob looked at me and said, “Okay, Rose. Do it!”

We already had some Jewish studies courses at U of T, but Rob was looking for something more. I had no idea how to get started, but we were very fortunate and now we have a very thriving Jewish Studies program.

What were some of the issues you dealt with as chancellor?
Just as when I was a student, one of the problems with U of T is how to get commuter students more involved. They go to their lectures, maybe go to the library and then they go home. When I became chancellor, I felt we had to do something to bring these kids into campus life. So I worked on that.

I was also concerned that the University was neglecting non-wealthy alumni. I suggested to the fundraisers that it would be nice if we paid attention to the many people who couldn’t give millions of dollars to the University but could contribute small amounts. And when we did that, we were very successful.

What advice would you give someone going to U of T today?
Stay in residence if you can. It’s a completely different experience. If you’re in residence, you’re involved in everything that’s going on. You’re right there at the heart of things. While you’re at U of T, the university is your life.

To honour Rose Wolfe's memory, the family has requested that charitable donations go to the Factor- Inwentash Faculty of Social Work at the University of Toronto, 246 Bloor Street West, Toronto, M5S 1V4,

Donations can be made by going directly to the central U of T donation website or by contacting the director of  advancement, Judy Scheininger, at  judy.scheininger@utoronto.ca. 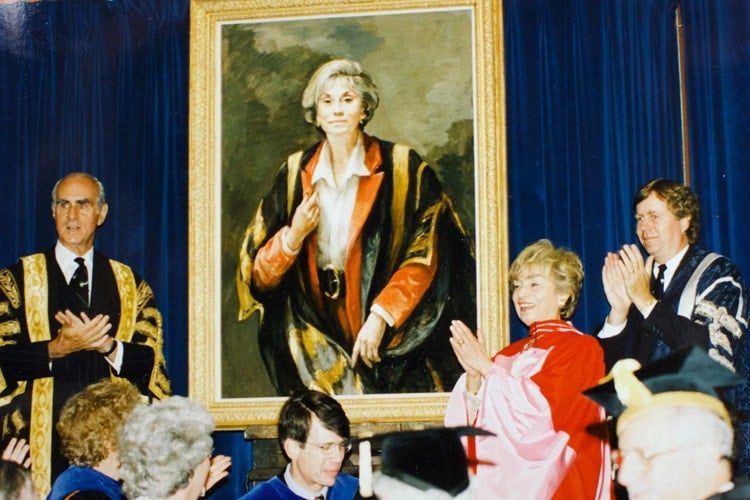