Remember when Zach LaVine decided he didn't even need that double-between-the-legs dunk?

NBA All-Star Game brings everyone to the 6ix: Russell Westbrook, Karl-Anthony Town and that ESPN reporter who didn't like Win Butler's post-celebrity-game insights 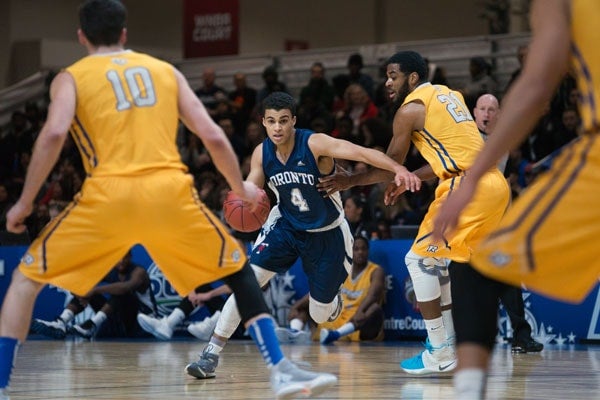 “I think local fans definitely got a boost from the all-star game coming to Toronto,” says Sage Usher (photos by Martin Bazyl )

For a weekend, Toronto went from being a cool city to a really cool city, when an estimated 120 NBA players, to say nothing of celebrities and tourists, descended on the town for the NBA All-Star weekend.

Not wanting to spoil any preconceived notions of the North, Toronto was hit by freezing temperatures, but not even that spoiled the excitement and fun felt throughout the city.

“For any basketball fan the NBA all-star weekend is always a highlight of the year, probably more so from an entertainment value, but this year across Canada we've really felt as though the game has been brought to us and we've had an opportunity to interact with the NBA in a way that is fairly unique,” says John Campbell, head coach of the Varsity Blues men’s basketball program.

Read more about the All-Star Game's impact on Toronto

Coach Campbell's highlights? That would be the University of Toronto's Goldring Centre for High Performance Sport hosting the first and last stop for the Canada wide NBA all-star challenge, and the Varsity Blues going head to head with the Ryerson Rams in the  Ontario University Athletics Showcase at the Enercare Centre.

“There's been a real buzz around Goldring right from its opening last year and now to be able to show it off, not just to the U of T community, but really to the worldwide basketball community, was really special,” says Campbell. “And, it’s been really special for our athletes to have an opportunity to have an increased profile at our events.”

This was the first time the NBA all-star game was held outside the U.S. – and the choice of Toronto for host city is indicative of where Canadian basketball currently stands, Campbell says.

Campbell believes a number of factors contributed to this, including the changing demographics of Canada and the accessibility of the game that allows a large percentage of the population to participate.

“There’s a group of kids coming through right now who experienced the NBA in Canada, both in Vancouver and Toronto, and that's a group that’s had more options from a professional sporting perspective than the group that passed before that,” says Campbell. “Certainly in my day and age Canada was essentially a hockey country.”

Sage Usher and Manvinder (Manny) Sahota both started playing basketball as kids, following in the footsteps of their older siblings and friends in the neighbourhood. Now both studying at U of T, they continue to pursue their love of basketball on the Varsity Blues basketball team. Despite losing to the top ranked Rams on Sunday, both spoke of their team’s excitement at experiencing the once in a life time opportunity of being part of the all-star festivities.

“It is nice to have U of T, the Goldring Centre, and CIS Basketball as a whole be recognized by the NBA, as it may help to bring more awareness to our league. I think the Bell NBA Challenge and the game against Ryerson will help to do this,” says Usher, who is in his 2nd year at the U of T urban studies program.

Seeing the community come together was an added bonus.

“Basketball fans across the city have seemed to be fired up more than the past with the Raptors recent success and the surge of Canadians in the NBA,” says Sahota (pictured below), a fourth-year student of environment science and conservation biology.

“But I think the all-star weekend coming to Toronto is like the icing on the cake.” That icing included what some are describing as the best dunk contest in the history of the NBA, the big man winning the skills competition, an entertaining three-point shootout, a jam-packed celebrity game and sold out rookie game.

And beyond the glitzy courts of Air Canada, fans had the opportunity to participate in numerous activities, skills competitions and programming on more than 40 courts and baskets at the Enercare Centre, including hands-on instructional clinics conducted by current and former NBA players.

“I think local fans definitely got a boost from the all-star game coming to Toronto,” says Usher. “Basketball in Toronto and Canada is currently booming and not only did this provide Toronto basketball fans with something to be excited about, but it focused the rest of the basketball world on our city for the weekend.”

The best city in the world, according to Drake.