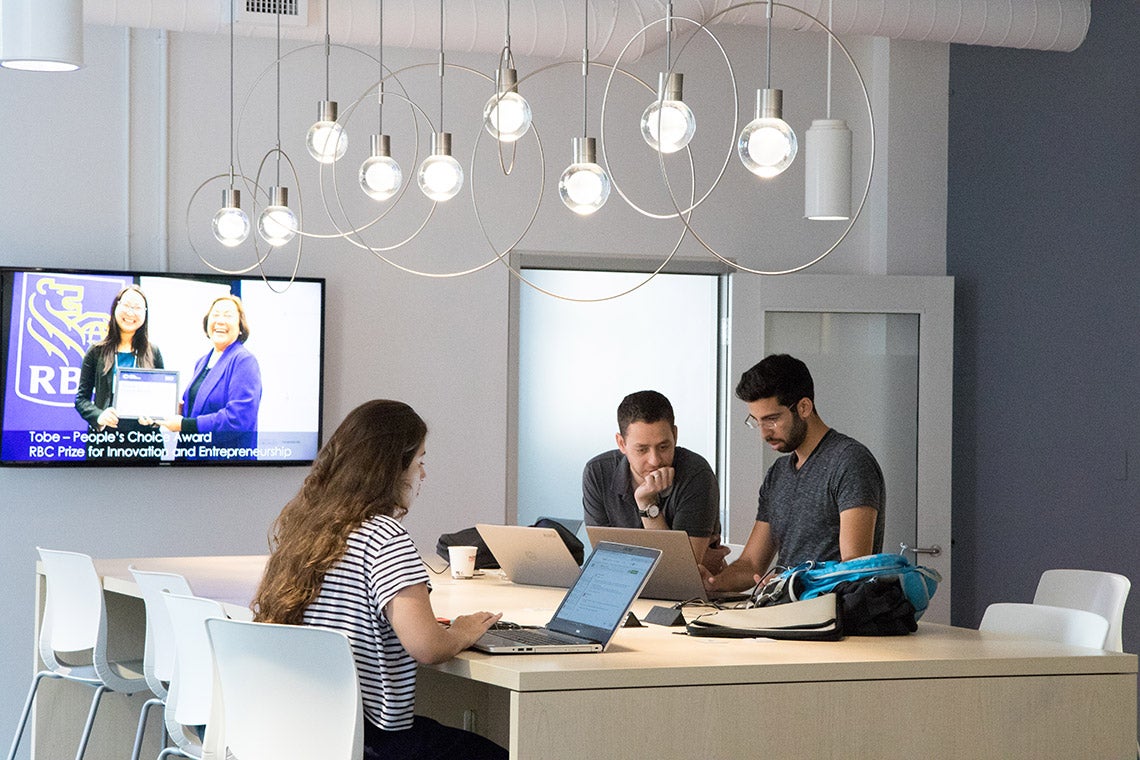 U of T's ONRamp, a co-working and collaboration space, is designed to facilitate connections between researchers, entrepreneurs, investors and other members of the innovation community (photo by Chris Sorensen)

The University of Toronto has enlisted a new post-secondary partner in its effort to help young entrepreneurs build the companies and jobs of the future.

Queen’s University this week became the fourth university in Ontario to join U of T’s ONRamp initiative – a 15,000-square-foot collaboration and co-working space for startups located on U of T’s downtown Toronto campus.

Members of the Queen’s startup community will have access to the facility to work on their ideas, host pitch competitions and networking events and meet with Toronto-based investors and customers.

“We’re thrilled to have Queen’s join the ONRamp entrepreneurship community,” said Derek Newton, U of T’s assistant vice-president of innovation, partnerships and entrepreneurship.

“U of T is committed to supporting Ontario entrepreneurs and their businesses and believes it can have the greatest impact by collaborating with post-secondary partners along the Toronto-Waterloo corridor and beyond.”

Launched by U of T in 2017, ONRamp boasts three floors of flexible, daily-use co-working spaces, meeting rooms, boardrooms and event spaces, including the RBC Innovation Hub. There’s also a kitchen and lounge area.

In addition to U of T, partner universities currently include Hamilton’s McMaster University, London’s Western University and the University of Waterloo.

More than just temporary office space, ONRamp is designed to facilitate connections between researchers, entrepreneurs, investors and other members of the innovation community. It’s a focal point for entrepreneurs working with U of T’s nine on-campus accelerators and is located directly across the street from the MaRS Innovation District, which also houses the JLABS life sciences incubator.

Toronto’s hospital and financial districts, meanwhile, are just a short walk or subway ride away.

“ONRamp provides physical space where Queen’s or Kingston-based entrepreneurs may access resources and connect with a broader network of entrepreneurs in order to grow their businesses,” said Kimberly Woodhouse, the vice-principal of research at Queen’s.

At last count, the ONRamp community boasted 50 startups and 600 active users. Events that have taken place at ONRamp over the past 18 months range from an education session for medical startups to a talk by Israeli tech guru and former Intel Corp. executive Mooly Eden.

Chuang Li, who attended the University of Waterloo, took advantage of his school’s connection to ONRamp last fall when he was looking for a space to demo his startup’s product to Toronto-area customers.

Li’s startup, Mirage VR, makes an immersive, multiplayer virtual reality system that allows up to five people to move freely around a nine-square-metre room and interact with one another inside the game.

“As you can imagine, it’s hard to find a 30-foot-by-30-foot space in downtown Toronto,” said Li, who is affiliated with the University of Waterloo’s Velocity incubator.

“ONRamp was really clutch in helping us find that space and, as a result, we ended up closing two deals.”

He added that ONRamp’s focus on collaboration across the Ontario post-secondary sector sets it apart from other co-working spaces.

“This type of relationship between the schools, because it’s such a tight-knit community, I feel like they are really working in the entrepreneur’s best interest,” he said.

“Having this network and people who were able to make introductions really helped us a lot.”