Pushing the boundaries of micro-robotics, U of T researchers create 'RoboWorm' 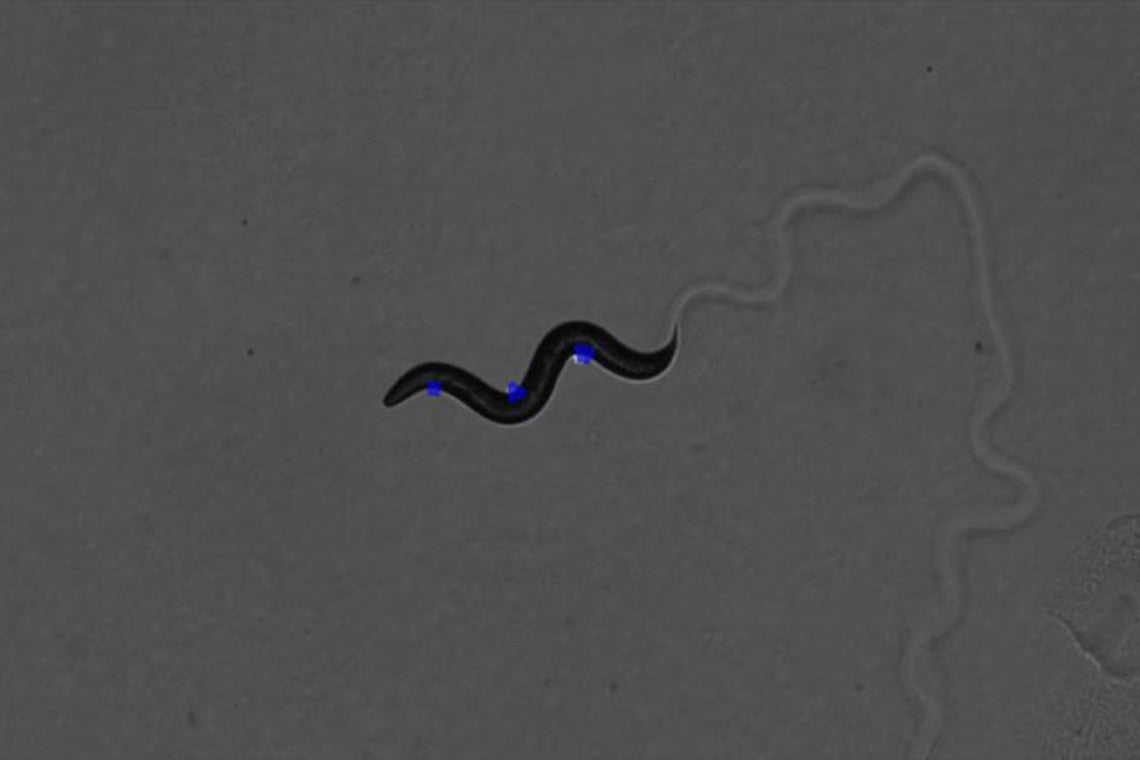 Points of patterned laser light (blue) are projected on computationally selected positions to activate the muscles of a one-millimetre-long C. elegans worm (image courtesy of Xianke Dong and Zhaoyi Xu)

University of Toronto researcher Xinyu Liu and his team design robots, but their latest creation stretches the very definition of the term – it’s controlled by a computer, but has no mechanical parts.

Instead, the physical body of the robot is a tiny, soil-dwelling worm known as C. elegans.

“Essentially, what we’ve done is to replace the organism’s neural control patterns with our own control, using light-based stimulation,” says Liu, a professor in the department of mechanical and industrial engineering in the Faculty of Applied Science & Engineering. “This enables us to achieve complete closed-loop control of a living organism, which is a new strategy in robotics.”

C. elegans worms are often used in biology studies as a model organism, due to their brief lifespans (between 18 to 20 days, on average), anatomical simplicity and genetic similarity to more complex organisms. Ten years ago, Liu was inspired by a video created by a German-American research team that had modified a C. elegans worm using a technique known as optogenetics.

The research team used this method to modify nerve and muscle cells within organisms to express a type of light-sensitive protein called rhodopsin. Because C. elegans is transparent, shining light on the affected muscle cells causes them to contract and bend the worm’s body.

“In the video, they shone a laser light on the side of the worm, and that part would bend due to the muscle stimulation,” Liu says. “Our hypothesis was that if you could coordinate the pattern of that light simulation, you could replicate the worm’s natural method of locomotion.”

C. elegans worms move like snakes, twisting their bodies left and right in an S-shaped pattern, similar to a sine wave. Though this pattern is relatively simple from a mathematical point of view, replicating it in a controlled way turned out to be very difficult.

Working with a group led by U of T's Mei Zhen, in the department of molecular genetics in the Temerty Faculty of Medicine, the team made a key breakthrough through collaboration. They created a genetically modified worm that was in some ways the reverse of one in the original video Liu saw. Rather than bending its muscles when exposed to light, this worm gave off light whenever its muscles were activated.

“Watching the pattern of muscle activation, we could see that it was slightly out of phase with the movement of the animal,” Liu says. “In other words, the muscles fire slightly before the actual motion. If we wanted more accurate control of where the worm was going, we needed to account for this phase difference in our light stimulation pattern.”

In a paper recently published in Science Robotics, Liu and his team describe how they created their so-called "RoboWorm." An optogenetically modified C. elegans worm is subjected to a pattern of light simulation – controlled by sophisticated algorithms developed by Liu and his team – that activates the worm’s muscles in the right sequence to replicate a snake-like locomotion pattern.

The algorithms achieve what is known in robotics as closed-loop control. This means that the team used microscope images to measure precisely the location and movements of the worm at a given moment and incorporated that feedback into their decision-making process to accurately steer it to the next target point.

Using this system, Liu and his team can move the worm forward, make it turn left and right, execute a U-turn and even navigate a simple maze.

While many groups around the world have developed micro-robots that can crawl, swim or even grip tiny objects, most are controlled using a magnetic or acoustic field. Using light might open up new possibilities, perhaps even medical robots that could be deployed into the human body.

“This is a proof-of-concept demonstration," Liu says. "RoboWorm is not truly a robot yet, but it could be one day.”