A public health visionary, Vivek Goel leaves a lasting legacy at U of T 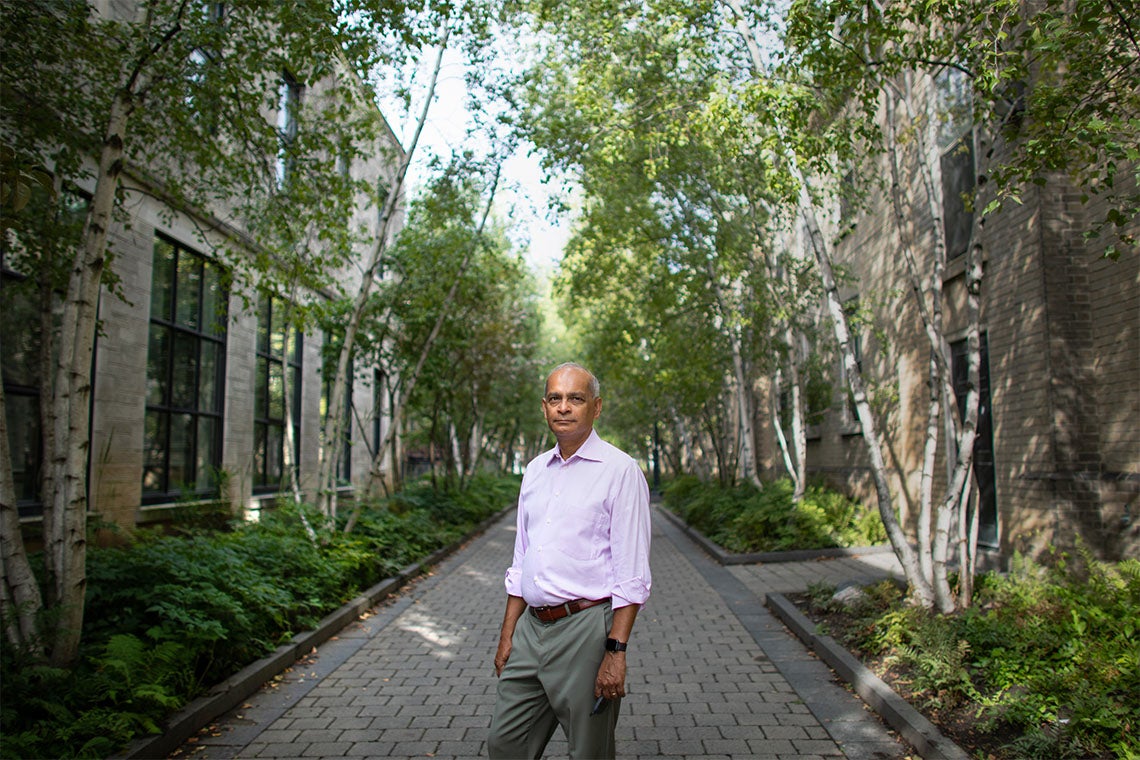 The former U of T vice-president and provost, vice-president, research and innovation, and strategic innitiatives, and professor emeritus at the Institute of Health Policy, Management and Evaluation (IHPME) enjoyed a more than three-decade relationship with the university during which he helped make Dalla Lana a renowned public health school.

After moving up through the ranks of academia, government and to the top rungs of U of T, Goel – along with fellow public health evangelist and U of T President Emeritus David Naylor – seized the moment to carve out a stand-alone school from what is now known as the Temerty Faculty of Medicine. As a U of T medical resident in the mid-1980s, Goel advocated for the creation of a separate public health faculty. As a young academic, he was part of a group that recognized the power of marrying epidemiology with health systems and policy, forming the roots of IHPME.

“The first few weeks of [my] stepping into the dean’s position, Vivek invited me to lunch for a pep talk and a few specific mandates,” recalls Catharine Whiteside, former dean of the Temerty Faculty of Medicine.

“One request was to establish a school of public health and, with his support, the strategic planning was started that required considerable culture change. When Paul Dalla Lana came along a couple of years later, we were ready for his investment and the school was launched. It took a while, but the DLSPH emerged as a separate, very successful faculty – just as Vivek envisioned.” 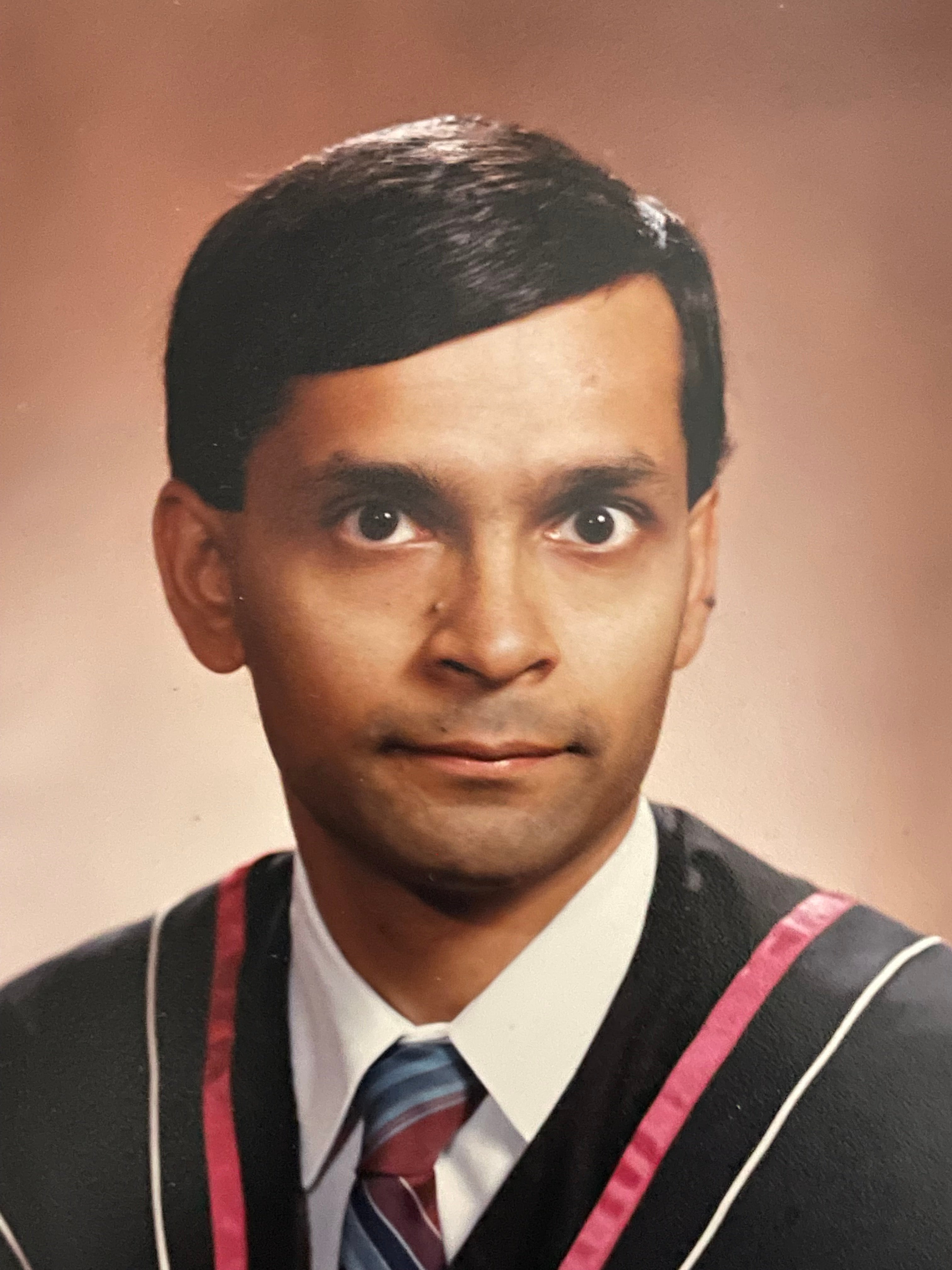 Vivek Goel earned a master’s
degree in community health
from U of T in 1988.

Goel first arrived at U of T as an intern in 1984 and started as a graduate student and post-graduate medical resident in 1986 in the medicine faculty’s old division of community health (now Dalla Lana). The program has produced a number of top government health leaders, including David Williams and Sheela Basrur, both former Ontario chief medical officers of health, and Howard Njoo, deputy chief public health officer at the Public Health Agency of Canada.

In addition, some of Goel’s former students, including Doug Manuel, Ross Upshur and Laura Rosella, are among the leading Canadian academics in public health.

Along the way, Goel met his wife, then-epidemiology student Susan Jaglal, who is now chair of the department of physical therapy in the Temerty Faculty of Medicine.

Goel earned a master’s degree in health administration and another in biostatistics at Harvard University. Walking the halls of a building entirely dedicated to public health in Boston, he was struck by the energy and ambition of the stand-alone faculty.

As chief resident and a member of student government, Goel was tapped to serve on a committee reviewing the division of community health at U of T. It had been a decade since the old School of Hygiene had folded and its remnants were getting lost in the enormous medical school.

“There was a set of us that felt strongly that community health wasn’t working well in medicine and recommended that a separate school should be created,” recalls Goel. “The majority of the committee said we should focus on further implementing community medicine within FOM. I was one of the people signing the minority report. It was my first real engagement in that kind of academic review process and it shaped my interest in academic leadership.”

Goel joined the Faculty of Medicine, as it was then known, as a professor in 1991 and went on to help found IC/ES. During the 1990s, he watched, as a status-only faculty member, as the future of public health at U of T was reviewed and reviewed again. The very first bit of success, he recalls, was in the mid-1990s when preventive medicine merged with other disciplines including the behavioural sciences to create the department of public health sciences. By that time he had moved on to campus as a full-time faculty member.

At the same time, Goel was eyeing the launch of an exciting new area of public health. “We had population epidemiology and preventive medicine, but this emerging strength of clinical epidemiology was largely ignored on campus and it grew up in the hospitals and clinical departments,” he says. “The dean of medicine at the time, Professor Arnie Aberman, coaxed me into becoming the chair of Health Administration, and being part of the team to bring clinical epidemiology into the department.

“We went from being focussed primarily on hospital management and health policy to merging with all this great clinical epidemiological and health services research at the hospitals.”

The department would continue to expand, eventually morphing into IHPME.

The 2003 SARS crisis was a defining moment for public health in Canada. The disease hit an unprepared country with a weaker public health infrastructure than existed in peer nations. The following year, Goel started a four-year stint as U of T’s vice president and provost. A year later, Naylor became the university’s president and Whiteside was appointed dean of medicine.

“We were well lined up,” says Goel. “Cathy (Whiteside) commissioned a review and laid out the plan to create a school of public health within medicine and, over time, build up the foundations to create a freestanding faculty. Then Paul Dalla Lana stepped forward with the founding gift to establish the DLSPH as part of the university’s post-SARS vision.

“DLSPH with IHPME as part of it is so well positioned now because you look at its strengths across chronic and infectious diseases, mental health, biostatistics, occupational and environmental health, epidemiology, social sciences in health and bioethics – and then you connect these with the rest of the university and its affiliated institutions, and there are so many great opportunities,” he says. “At Harvard, I remember comparing and asking why can’t we have something like this? Now, when we were able to walk the halls in the Health Sciences Building, you feel the same sort of vibe I felt at Harvard. And I know it’s only going to continue to get better.” 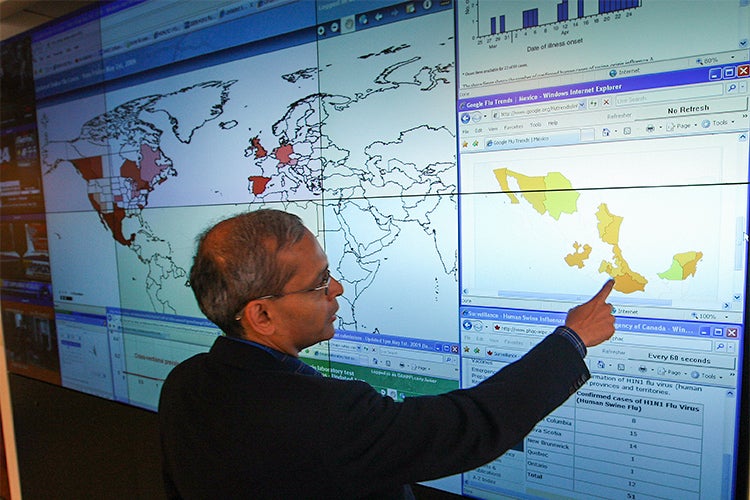 As president of Public Health Ontario, Vivek Goel monitors the latest developments in the H1N1 flu virus in 2009 (photo by Steve Russell/Toronto Star via Getty Images)

Goel left U of T in 2008 to become the founding president and CEO of Public Health Ontario, an organization created in response to SARS. Despite the high-ranking position, Professor Emeritus Chandrakant Shah – an early influence on Goel’s thinking around equity and diversity – frequently called or dropped by his office, unannounced, to advocate for more equitable representation among public health leaders.

Shah recalls fondly that Goel never turned him away, and always levelled with him.

“He always cared for his colleagues, his students and even his mentors,” says Shah. “He’s a brilliant, strategic thinker with the academic experience, but also he knows how to deal with the public and private sectors. He has been a good friend to the school over the years.”

Goel returned to U of T seven years later as vice-president, research and innovation, and strategic initiatives. When the pandemic hit, he quickly became special adviser to the university’s president and provost on the pandemic – all while serving on numerous national COVID-19 committees and task forces and maintaining a regular podcast on the pandemic.

His list of honours is long and includes membership in the Order of Canada and the Canadian Academy of Health Sciences, along with many teaching awards. 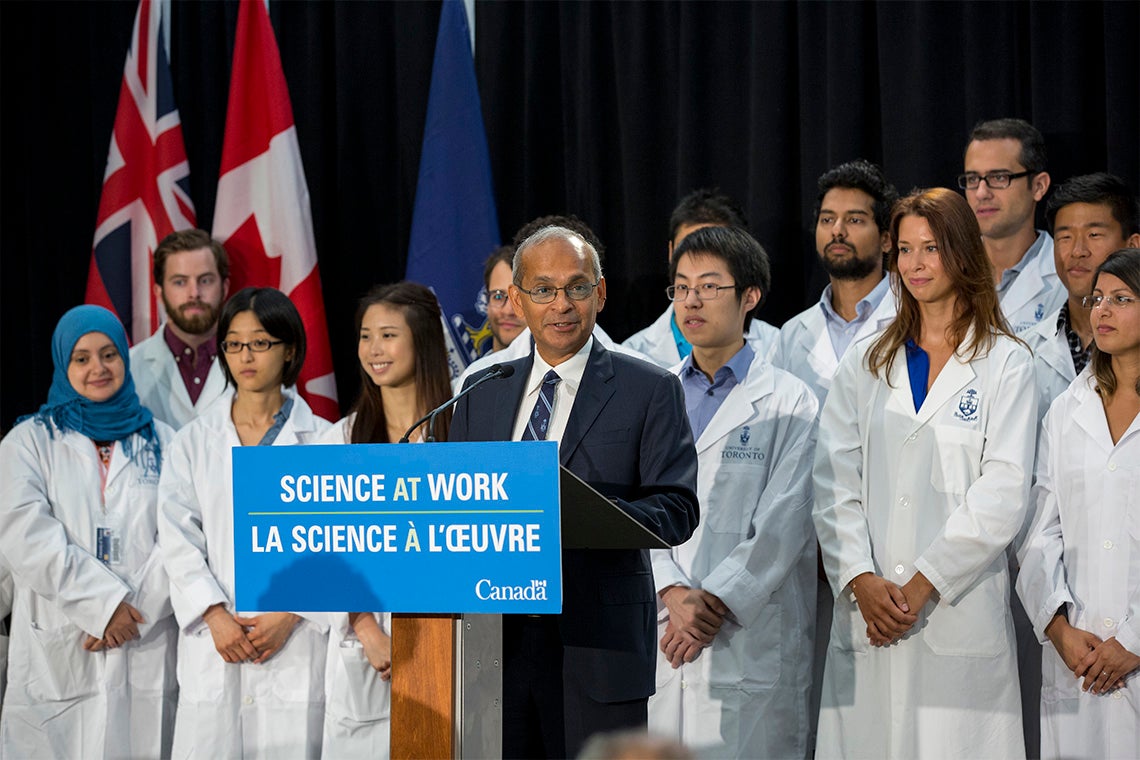 Vivek Goel, then U of T’s vice-president, research and innovation, delivers remarks at a 2015 funding announcement that enabled the creation of Medicine by Design, an interdisciplinary regenerative medicine initiative (photo by University of Toronto)

“He is someone who teaches you to believe in yourself and empowers you to have an impact in ways you could not have imagined,” recalls Laura Rosella, an associate professor at the Dalla Lana School of Public Health and former post-doctoral researcher who worked with Goel. “His commitment and dedication to mentorship in a way that builds people up will be felt for generations to come as many of those he has trained have become top public health and health system leaders and researchers.”

As president of a major Canadian university, Goel now hopes to use his experience and platform to advocate for a stronger public health system in Canada.

“I hope I’ll be able to bring a voice for public health much more broadly across the country and to many other tables,” he says. “In other countries they have figured out ways to insulate the public-health infrastructure from politics. We need people to talk about how to protect and sustain them, and there’s a role for academic institutions in that process.”

He is also eager to maintain ties as a professor emeritus at the Dalla Lana School of Public Health, and to share ideas about how to raise the public health literacy of Canadians on a broad level.

“Vivek has had a leadership role in shaping the careers of many of our students, alumni and faculty, our school, our public health system and Canada’s response to the pandemic, among so many other accomplishments,” says Brown. “I know that he will bring the same impactful leadership to Waterloo – but I can’t imagine our school without him.”