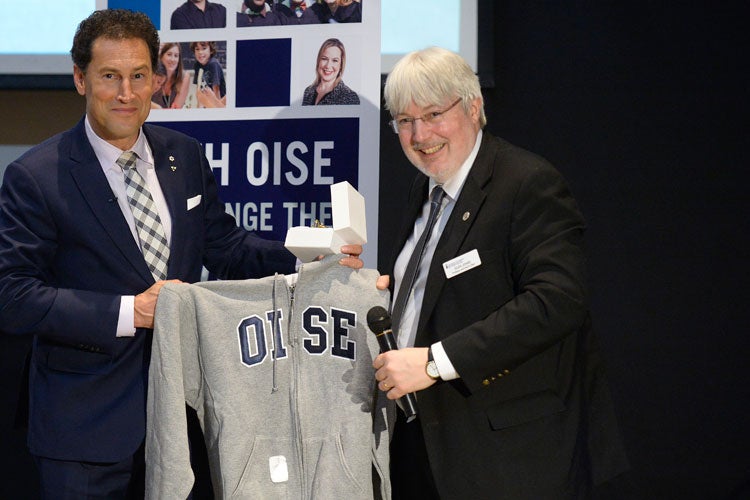 Professor Glen Jones, interim dean of the University of Toronto’s Ontario Institute for Studies in Education, has been appointed dean of OISE for a five-year term effective July 1, 2016.

Professor Cheryl Regehr, vice-president and provost of U of T, announced the appointment on May 19, following an extensive international search for a new dean.

“Professor Jones has a stellar scholarly reputation nationally and internationally and is regarded as a leader in his field,” Regehr said. “He is well acquainted with OISE’s programs and curriculum, faculty, students, staff and alumni.

“He is admired by the OISE community for his highly collaborative and thoughtful leadership style.”

Jones, who has been interim dean for the past 10 months, has been part of the OISE community for almost 30 years – first as a master’s and PhD student. He was then hired at Brock University as an assistant professor in 1992 and returned to OISE as an associate professor in 1995.

“I am humbled, honoured and excited to be entrusted to lead OISE over the next five years,” Jones said. “Given our outstanding legacy, more than ever, we need to work together to create an academic vision and strategic plans that help shape the future of education in Ontario and well beyond.”

Among the many priorities for OISE, Jones emphasized the importance of responding to the recommendations of the Truth and Reconciliation Commission that deal specifically with education and the review of its master of teaching program, its flagship teacher education offering.

OISE is Canada's only all-graduate institute of teaching, learning and research.  For more than a century that includes pre-cursor teacher education at the university, OISE has helped transform education in Ontario, throughout Canada and around the world. OISE became a unique entity in the 1965/66 year and is currently celebrating its 50th anniversary.