Prime Minister Trudeau to talk Canada-U.S. relations at U of T 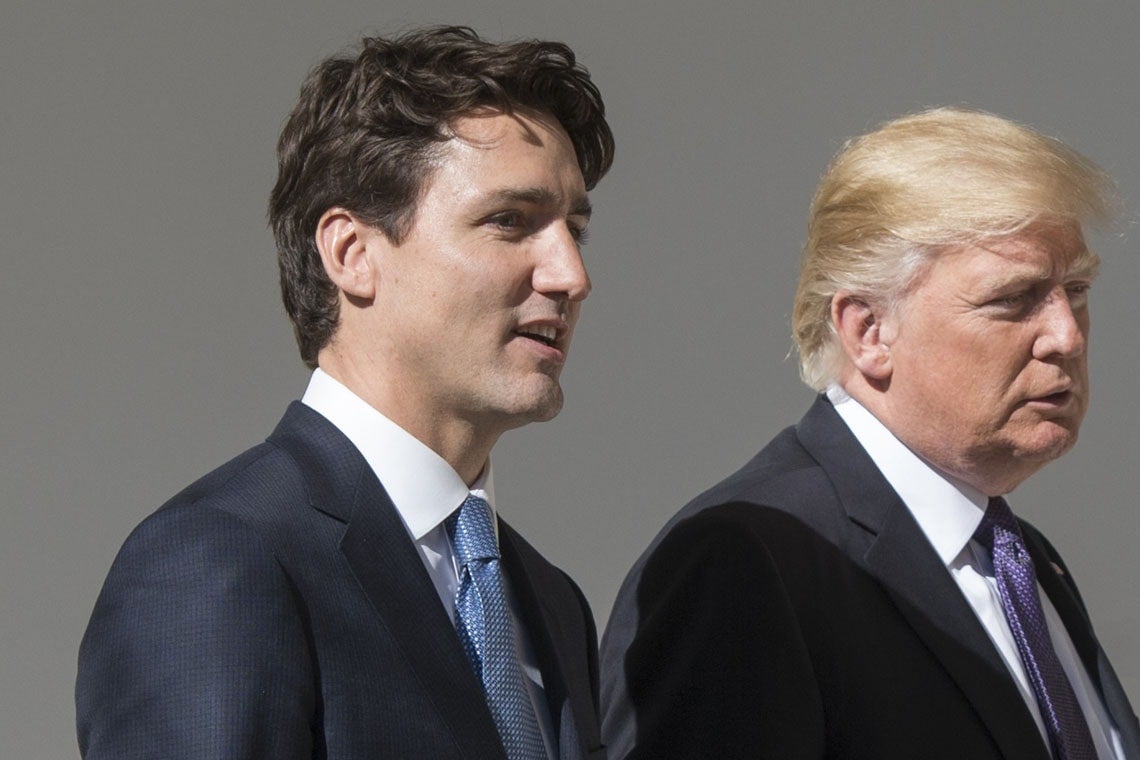 Prime Minister Justin Trudeau is expected to talk about his relationship with U.S. President Donald Trump, along with policy issues like climate change, trade and Canada's role in the world (photo by Saul Loeb/AFP/Getty Images)

In conversation with The New York Times

The future of NAFTA, a U.S. withdrawal from the Paris climate pact, Canada’s emerging leadership role on the world stage – that's the backdrop for a conversation with Prime Minister Justin Trudeau taking place at U of T this week.

Is it any wonder that tickets for the event, co-organized by the Martin Prosperity Institute and The New York Times, sold out in just six hours?

“We’re in a unique time with [Foreign Minister] Chrystia Freeland’s recent speech in the House of Commons about Canada’s changing role and position in geo-politics,” said Jamison Steeve, executive director of the Martin Prosperity Institute at U of T's Rotman School of Management. “My hope is that we get a clear articulation from the prime minister of how he sees that role.”

The institute, a think tank that focuses on the future of democratic capitalism, is led by such internationally recognized leaders as Roger Martin and cities expert Richard Florida. The institute teamed up with the New York Times to host the June 22 event, titled Trade in the Balance: Canada-U.S. Relations. While Thursday's event is sold out, a live broadcast will be available from 12:45 p.m. to 2:00 p.m.

Chief White House Correspondent Peter Baker and Canada Bureau Chief Catherine Porter of the New York Times will be posing the questions and steering the discussion.

What can the audience expect?

Historian Robert Bothwell, a professor of international relations at the Munk School of Global Affairs, says Trudeau is in a delicate position: he can't succumb to provocations from U.S. President Donald Trump or to demands from Canadians to say something negative about the American leader.

“Poor Justin,” says Bothwell. “Obviously, Canada has been trying to have a rational response to an irrational phenomenon. Canadian-American relations in that sense are really not very good because they're not predictable. If the single most important person in the relationship seems to go off like a firecracker every morning at six, then what can we really do? In that sense, Justin's overall approach is admirable. It's difficult but admirable.”

Still, Bothwell says, it will be interesting on Thursday to watch Trudeau “pretzel himself” on the status of NAFTA and trade negotiations with the U.S.

“It's pretty clear the U.S. is going to want some visible concessions from Canada and Mexico to justify the hoo-ha that they've made about NAFTA,” Bothwell said. “They have to be seen to win.

“The U.S. hasn't had a complicated negotiation with anybody since Trump has become president. It's conceivable that negotiations could go on and on and on, with no immediate change in policy or status of trilateral trade. We don't really know how things will go.”

“Given the U.S. trade surplus with Canada, and the president's mercantilist approach to trade, Trudeau knows he has a strong hand,” Norrlof says. “Trump may be an unpredictable blow-hard, but if NAFTA falls apart, the U.S. has an interest in negotiating a bilateral trade deal with Canada.”

On climate change, Norrlof foresees Trudeau will somewhat “soften his criticism of the U.S.” by underlining alternative paths to climate action and welcoming the progress the U.S. has made in developing clean energy fuels and technologies.

Freeland's speech on June 6 is also generating interest in the event.

Bothwell says he wants to hear what the prime minister has to say, especially with the growing rift between Europe and Trump.

“Trudeau and his cabinet have gone further than I imagined they would,” Bothwell said. “Chrystia Freeland’s foreign policy speech was really one of the best speeches that any foreign minister has given in the last generation. It really is a principled outline of Canada’s position and Canada’s objectives in foreign policy. What she said about the nature of American politics, and what we must expect and deal with in terms of the United States, I couldn't agree with it more.

“I’m hoping that Trudeau is going to follow that or take the same kind of tone.”

The event is part of a “burgeoning partnership” for the Martin Prosperity Institute with the New York Times, Steeve says. They collaborated on a similar event surrounding Canada’s response to the Syrian refugee crisis and private sponsorship of refugees back in May.