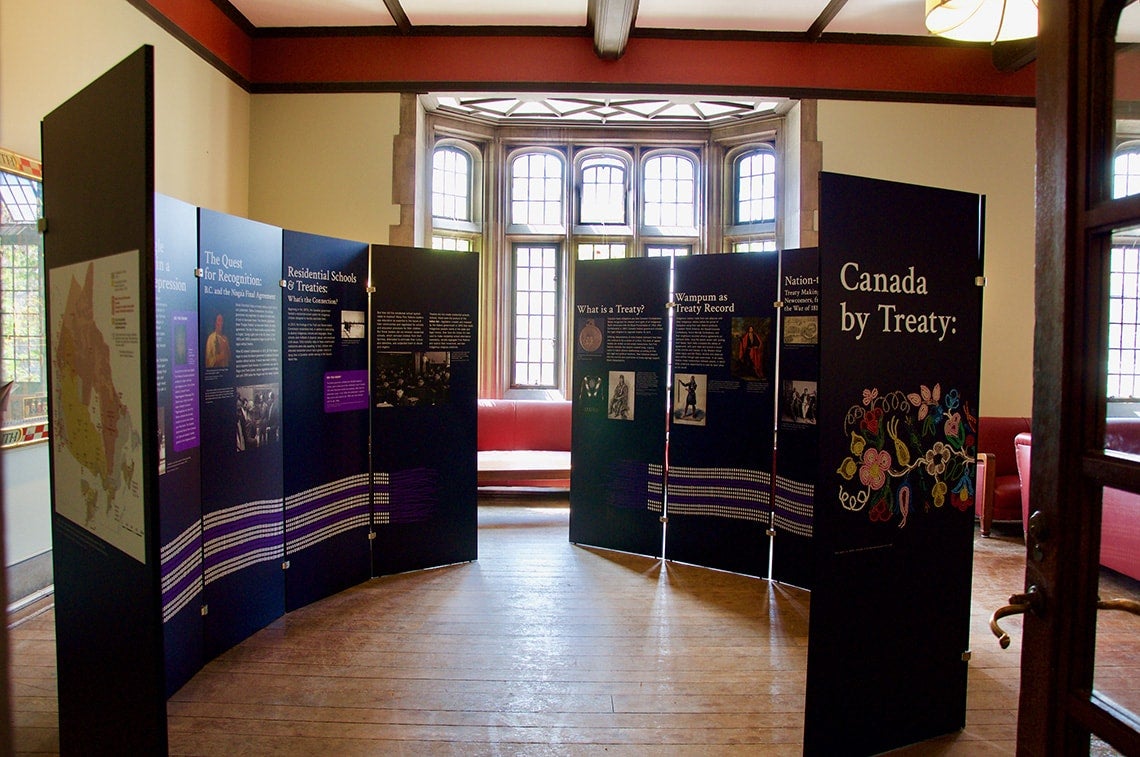 Using a blend of maps, paintings, accessible text and archival photographs, the display tells the long history of treaty-making, and how and why these agreements were essential to the foundation of modern Canada (photo by Diana Tyszko)

The Canada By Treaty exhibit at Hart House tells the story of how Canada was shaped by negotiation – not conquest.

The exhibit invites viewers to explore treaties – the legal agreements with Indigenous peoples – that allowed non-Indigenous people to live on, and own land in what is now Canada.

Produced as a direct response to one of the “calls to action” outlined in Canada’s Truth and Reconciliation Commission’s (TRC) final report, Canada By Treaty: Negotiating Histories seeks to educate Canadians on the key role of treaties in Canadian history.

“Our exhibit responds to Call to Action No. 94, which changes part of the oath of citizenship to ‘I will faithfully observe the laws of Canada including treaties with Indigenous peoples,’” said co-curator Heidi Bohaker, associate professor of history in the Faculty of Arts & Science. “We asked ourselves how this could be possible unless Canadians new and old learned more about what treaties are, and why and how they made Canada.”

She added that by “acknowledging ourselves as treaty people – and then by acting on that acknowledgment – we become rooted in this place and begin to understand our responsibility towards the land, each other and our ongoing treaty relationships.”

David Cameron, dean of the Faculty of Arts & Science, added: “Indigenous peoples have remained effectively invisible for far too long. Genuine reconciliation is a long-game that will require great persistence and commitment, but I think we are all hopeful that we are at a real turning point.”

Using a blend of maps, paintings, accessible text and archival photographs, the 24-panel display tells the long history of treaty-making, and how and why these agreements were essential to the foundation of modern Canada.

In addition to learning about the broad history of treaties in Canada, each student selected one treaty to research from the many that have been settled since Samuel de Champlain first arrived in the early 1600s.

The exhibit will be on display in Hart House’s map room until May 26. From there, it will travel to University College and Sidney Smith Hall over the summer months and then to other locations across all three University of Toronto campuses.

Exhibit sponsors include the Jackman Humanities Institute, Canada 150, Ontario 150 as well as University College, Hart House, the Centre for Indigenous Studies, University of Toronto Libraries and the Jesuits of English speaking Canada.

Read more about the exhibit